Two of the greatest old school classic punk bands brought their own unique flavor of aggressive fun to the Inland Empire and reawakened the sleeping spirit that used to thrive every weekend in Corona. Ever since the beloved Showcase Theatre closed back in 2008 the punk scene in the Inland Empire has never been the same. The Vault down in Temecula sort of filled the gap left by The Showcase, but driving there took longer than it did to travel to L.A., but The Vault has since closed as well. That’s why it was a pleasant surprise to learn that The Dickies and Agent Orange were playing in Corona at a venue that had somehow escaped my attention for about two years. The M15 Concert Bar and Grill is a relatively upscale theatre that can accommodate seven hundred people conveniently located next to the 15 freeway. It’s a twenty-one and older club, so sorry kids, but after the show was over one of the Soloman family members (who used to own and operate The Showcase) informed me they were opening a new all ages venue in Ontario. Cool.

The first band was already onstage when I arrived. The Idiots put out some decent, simple thrash tunes interspersed with the occasional shredding guitar solo. I looked around and was impressed by how much money somebody had put into the M15. It had nice tables and comfy chairs, a large stage area, an abundance of professional lighting, pricey, but temping food, and an excellent sound system. Most everyone was sitting down, either drinking or having dinner. Sitting down at a punk show feels really weird to me, so I fidgeted as I sat and took in The Idiots. They were five older guys who did a fine job of setting the mood with their no-nonsense and fun-filled approach to aggressive music. Nothing really groundbreaking or amazing, but The Idiots set the positive tone, got the pot stirring, and tried to get the audience to approach the stage. I really liked the song, “Ridin’ Dirty,” a surfy, chunky, fun instrumental. 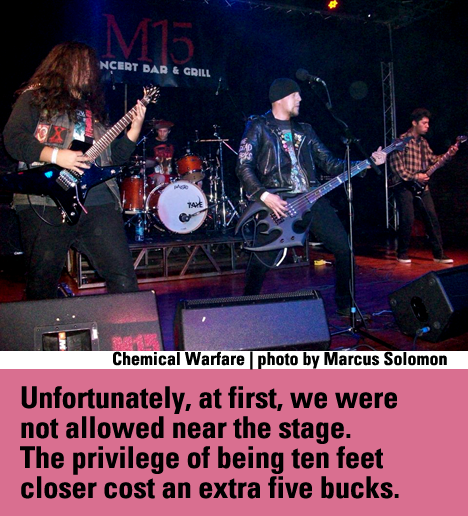 Unfortunately, at first, we were not allowed near the stage. The privilege of being ten feet closer cost an extra five bucks. That policy changed once Agent Orange started playing, but for the duration of the first two bands, there was a collective sense of muted grumbling from many in attendance. The thrash metal/punk band Chemical Warfare did its best to get people to revolt and to rush the stage, but the few who dared were politely escorted from the dance floor and back to the carpeted dining area. Chemical Warfare did a commendable job of making up for it by entertaining us with some rather enjoyable supersonic metal intensity. These four young guys from Riverside reminded me a lot of the metal/thrash unit Municipal Waste with a distinctive hint of Slayer with their good natured and impressively tight presentation of sonic evil. Chemical Warfare raised the energy level and a few motivated souls attempted to slam dance on the carpet area, but this too was a no-no. Here’s a link to Chemical Warefare’s Facebook page. 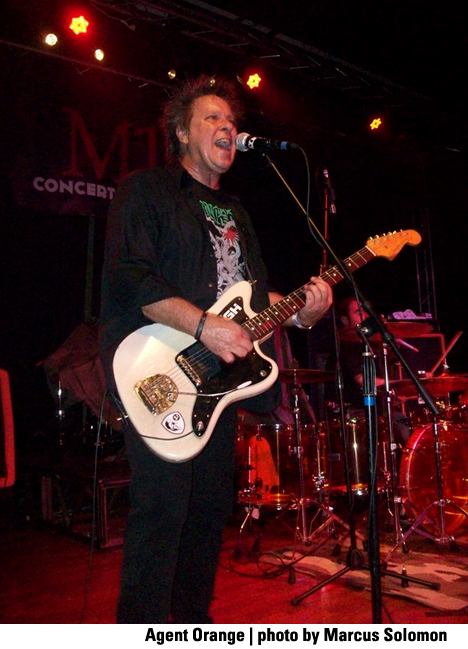 I ran around trying to secure some sort of photo pass so I could get close enough to the stage to take some decent pictures when Agent Orange started playing. Upon reentry, I discovered that the audience had decided en masse to defy the stay-back-from-the-stage policy and everyone was happily up front where we all deserved to be. True to old school, surf punk form, the set began with the long-time favorite cover of The Bel-Airs’ instrumental “Mr. Moto”followed immediately by “Everything Turns Grey,”another long-time favorite cover “Secret Agent Man,” and two relatively newer numbers: “America,” and “This House Is Haunted.” The old guy slam pit was churning with full force and tattooed punk rock moms sat on the stage like they did during their teenage years. Vocalist/guitarist Mike Palm dedicated the song “Too Young to Die,”to Russell Johnson, the man who played The Professor on Gilligan’s Island, as he had died earlier that week. Unexpectedly, the band then played a cover of Dead Kennedys’ “Police Truck.” The crowd went apeshit even before The Dickies took the stage to play “You Drive Me Ape” later in the evening.  Of course they played “Bloodstains,” and you know that one: “Bloodstains / Speed kills / Fast cars / Cheap thrills…” It sounded just as good as it did when Rodney on the Roq played it in the early ‘80s. The set ended appropriately with “The Last Goodbye.”Find Mike, Perry, and Dave on Facebook here.

The clown princes of punk rock burst from behind the curtain with the bubbly and melodic love song “Rosemary,”to a roomful of appreciative old punks, most of whom, like me, have probably seen The Dickies dozens of times; some things never get old. We were treated to many of the old favorites such as “Fan Mail,” “I’m OK, You’re OK,” “Waterslide,” and “Doggie Do.” Leonard was looking healthy and energetic as he did his trademark goofy pinkie in the ear, sideways kick dance. After performing “Manny Moe and Jack,”he revealed that he had just completed his eleventh year of sobriety. Being the ever-irreverent comedian, he said he owed it all to filling his inner void with child porn. Very few can get away with making a joke like that. Lead guitarist Stan Lee was sporting the unshaven hipster look and kept laughing throughout the entire set; that’s how much fun it is to be Stan Lee of The Dickies. When he and the other members of the band are doing their thing, it is obvious they are all having the time of their lives.

True to form, Stewart the giant penis puppet made his appearance during “If Stewart Could Talk,” thoroughly enjoying all the touching and stroking from the appreciative fans. Halfway through the show, Leonard paused to consider a woman’s song request. He turned to the band and said, “She wants to hear “I’m Stuck in a Pagoda with Tricia Toyota,” but before the band could respond he humorously replied, “No, we’re not going to play that” and they didn’t. My favorite was the madcap rendition of The Moody Blues’ “Knights in White Satin,” which left Stan Lee’s nimble, bendy solo pleasantly stuck in my head for weeks. The set concluded with the time-honored rendition of the song “Gigantor,” from the 1964 cartoon of the same name.

After some seriously loud encouragement from the audience, The Dickies returned for a well-deserved encore.  We were then treated to  “Rondo (the Midget’s Revenge),”a lively, bouncy, instrumental bolero from the band’s first album, The Incredible Shrinking Dickies, and the hyper-manic cover of “Eve of Destruction,”with the final tune being the beloved “Banana Splits.” No matter how many times I have seen this band, it’s always a fun-filled trip through goofyland.Here’sthe band’s official website.

I look forward to more awesome shows at this venue. It seems the staff figured out pretty quick that the punk audiences want it all directly in the face. M15 hosts shows from many different genres so take the time to check out its event calendar on their official website.

NECKTIES MAKE ME NERVOUS: (I’m the Captain and I’m Telling You) This Ship Is Fucked: 7”EP