This was another one of those great shows where you wonder where everybody was, because so many missed out on a truly rockin’ evening of shredding punk rock. Headliners The Crazy Squeeze spit out some excellent and versatile punk ‘n’ roll, veteran punkers Symbol Six was a well-oiled, thundering punk rock machine, and the enduring stalwart Billy Bones led his namesake band though another high-energy trip to the spirit of ’77.

The Café Nela is a fairly new punk venue in Los Angeles, and if you have not been there yet, take the time to check out its calendar and get over there. I was told that some of the members of The Gears bought this little restaurant/bar and turned it into a compact, easy-going, punker’s paradise. Usually, I hate bars, but Café Nela felt like home as soon as I walked in the door with all the punk rock and skateboard pictures on the walls and all the familiar, friendly faces I have seen at so many other gigs over the years. All the cool, aging homies were there. Being owned and operated by musicians, the sound is superb.

First up was The Billy Bones, fronted and created by seminal punk rock vocalist…um, Billy Bones, who also founded and sang for The Skulls way back in 1976. It’s always difficult for a band to be the opening act, but Billy and his boys exploded straight away and the joint was rocking in a split second. The sparse but enthusiastic audience was treated to a mix of tunes both new and old. The band has added a rhythm guitarist by the name of Dustin Snodgrass, thusmaking the overall sound of the band much bigger and fuller. Longtime lead guitarist Alex Mack has been replaced by Mike Livingston (also a long-time member of The Mau Maus), who brings a bit of a new flavor to the group with his Ramones-like guitar hammering and physical posturing (you know, knees together, feet apart with toes pointed inward, strumming arm raised high; stuff like that.)

Taking a few cuts from the band’s LP The Complexity of Stupidity (Dr. Strange Records), the band tore through “We’re Selfish,” “Use Me,” “She Drives Me,” and one of my favorite covers of all time, the pumped-up rendition of Roxy Music’s 1973 hit, “Editions of You.” Billy and crew also dished out some well-worn numbers from The Skulls such as the pirate-themed, “Aye Aye Aye,” the ominous “Victums,” and “Jerry # 5.” Notably absent was Bad Otis Link on saxophone. In my opinion, Billy has never received his full due credit from the underground music establishment, but that has never dissuaded Mr. Bones from keepin’ on and always putting 110% into his live performance. See this band live and see for yourself…. and you can also find them on Facebook here. 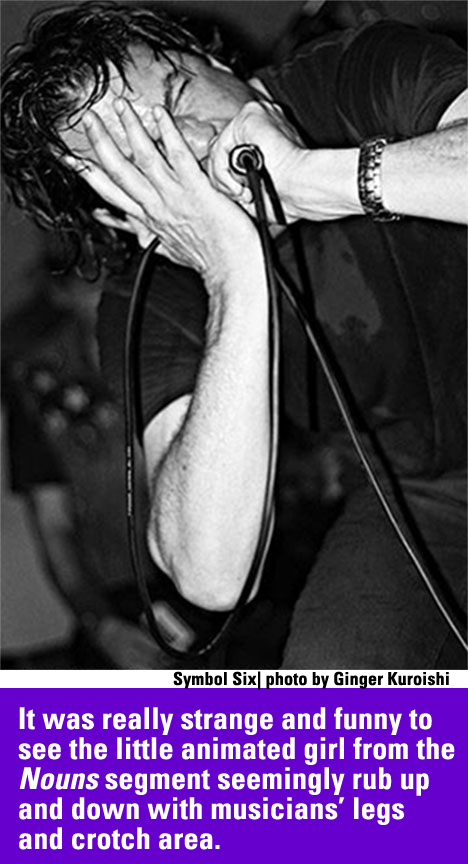 Another still thriving and surviving entity from the past, Symbol Six really tore it up. People seemed to appear from nowhere and the little bar was much fuller all of a sudden. Symbol Six is a band that is felt as much as it is heard; thick, heavy, with a great, visceral buzzing sensation for the entire set. For some reason, vocalist Eric Leach reminded me of the late Jim Morrison of The Doors. Did he have leather pants? I don’t remember, but the ladies seemed to exude more pheromones as he did his thing.

The first song was appropriately named “Spit It Out” and it hit us right in the face with a nice, warm, sonic gob of goodness. The venue was projecting video images of Schoolhouse Rock onto the stage, which made a strange psychedelic-ish mixture of color and sound. It was really strange and funny to see the little animated girl from the Nouns segment seemingly rub up and down with musicians’ legs and crotch area. The standout songs from that evening included tunes both new and old such as: “It Really Doesn’t Matter,” “Get Outta My Way,” “Megalomaniac,” and the namesake of the new album “Dirtyland.”

After Symbol Six’s set, I approached rhythm guitarist Tony Fate and told him it seems like the guitar is part of his body and the things going through his mind come out his fingers. He stopped, looked up at the ceiling while he thought about what I said, and replied: “Yeah! That’s exactly it! You get it huh? That’s probably the nicest compliment I ever got,” and he walked away smiling and nodding at the music that was probably still going through his brain. Symbol Six finally has a new release called Dirtyland, which is available from Jailhouse Records. 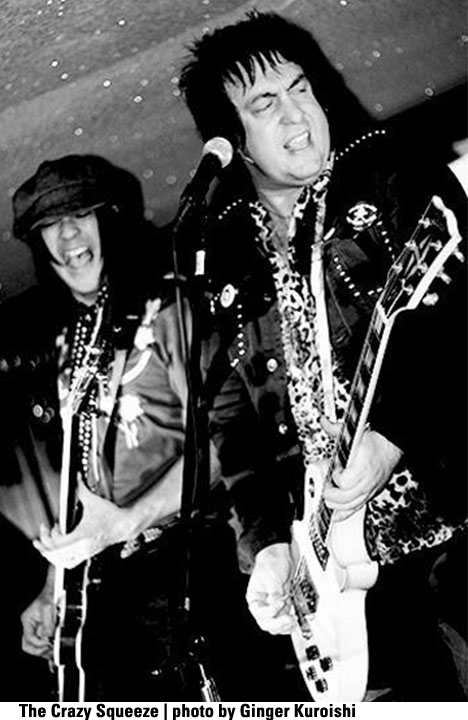 By this time, it was getting late. I was tired and wanted to go home. The Crazy Squeeze set up quickly, woke me the hell up, and made me glad to have stayed. Lead guitarist and vocalist Johnny Witmer is also the main axe man for the snotty OC hooligans known as The Stitches. His four-member creation here is a unique mix of ‘60s-influenced, garage-style punk‘n’roll, sprinkled with liberal doses of gritty ‘50s, roots rock, and bluesy leads. Try to think of hard glam without all the stupid glam.

The audience had thinned considerably, but those who left missed out. The eclectic mix was loud, nasty, and strangely danceable (even though I do not dance.) Speaking of nasty, one of the band’s best songs was “Sexual Activity Girl.” They did justice to Cock Sparrer with a cover of “I Need a Witness,” and “Gimme a Kiss” was just good old fashioned rock‘n’roll! The drummer Johnny Sleeper is a show unto himself with his weird style of playing. The tall guy sits up high over his kit and pounds downward with eyes mostly closed, and a big smile on his face like a kid that loves doing something wrong. He also looks somewhat similar to the character Rubin (Crispin Glover) from the cult classic film, Rubin & Ed. You can find The Crazy Squeeze on that Facebook thing and in dingy clubs all over the southland.

BRAINWORMS: Swear to Me; Tape: LP and Cassette

One Punk’s Look at Social Anxiety, Neuroticism, and Other Fun Stuff by Jamie L. Rotante