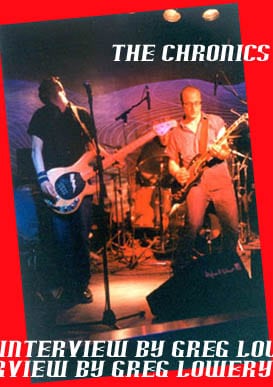 The Chronics: Interview by Greg Lowery

In the August, '99 issue of Maximum Rocknroll, Rema Young wrote an enthusiastic review of the Chronics' debut 7" on Rip Off Records, as two simple, memorable rock songs, "music for any old time." It's Buddy Holly, Pretty Things, Real Kids and Ramones, all rolled into a ball of powerful garage music and Rema wanted more. It's 2002 and even if these guys disappeared for a long while, now they're back with their debut album on Demolition Derby/Nitro Records. For this reason, Greg Lowery of Rip Off Records asked the band some questions in a very diplomatic way and the guys really felt at home...

Greg: Okay. Who are you guys, why should anyone care about your band, and where are you from?
Stefano: We come from Bologna, Italy but you should know that 'cause I got a fantastic gig in these parts for your band last year. Yeah, we are three Italian rockn'n'roll fans and we play rockn'n'roll music. You Americans invented it but Italians can do it properly if they want. We have just put out on Demolition Derby/Nitro Records. The LP's titled It's Too Late because a lot of time has passed since we put out our first 7". You know, Italians are lazy people.
Greg: It's been my personal experience that Italy has the hottest looking women in the world. Do you guys agree? Or are the Chronics a gay band?
Stefano: No, we don't like that kind of queerness. It seems to be the fashion to be that way, but we are old-fashioned. We like girls, only girls.
Roberto: Yes sir, and we like American chicks as well. I mean, we believe in television - all those blonde girls takin' the sun, you know what I mean? Are we suckers?
Shiba: We love all the good-looking girls: French, Dutch, Danish girls, without discrimination.
Greg: Some other band has the same name as the Chronics. Were you first and they ripped you off, or was it the other way around? Have you heard that other band?
Stefano: I dunno if they ripped us off, but we were around before them. 2001 was the first time we heard of this Swedish band and our 7" came out in early 1999. Anyway, more than two bands have the same name as the Chronics, so if it helps we'll be the Real Chronics, even if none of us like pot. We are the Chronics because we keep on playin' rock'n'roll and garage music and nobody cares about it.
Greg: The single, First Time, Best Time, on Rip Off Records came out two years ago. Why the big delay in getting an LP together?
Shiba: In 2000 our line up changed. Our bass player, Gabriele, had different plans of action, so we split up for a while and then Stefano asked Roberto to join the band.
Roberto: They were groping in the dark and I saved their souls.
Stefano: Shut up! It took quite a long time to find a new balance and to write new stuff, so here we are again, the Chronics.
Greg: How would you describe your sound?
Stefano: I've always loved the Pretty Things, the Pagans, Buddy Holly and Velvet Underground as well. I think you can hear a little bit of this thrown in our music… I don't know!
Shiba: I think we have quite a personal style, after all. Of course, when you play music, people notice if you have listened to the Real Kids or the Buzzcocks, but it's in the game.
Roberto: Shiba, fuck you! 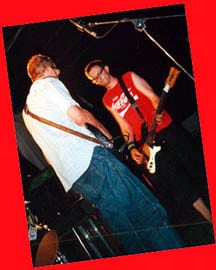 Greg: Why did you start playing music in the first place? Sex? Fame? Free drugs?
Stefano: Fame in the first place, 'cause all the rest is the consequence of fame.
Roberto: Hey, remember, we are not famous. You promised many things when I joined your band. You're a motherfucker.
Stefano: I know.
Greg: The United States sucks to play live unless you are some teenager's fantasy fake punk band like the Donnas or Green Day. Does Italy suck as bad as that?
Shiba: In Italy, it's the same and even worse if you are Italian and you sing in English.
Roberto: Yeah, only cover bands, Italian pop singers, and foreign bands don't have big problems to play live and win popularity. For example, there was a good number of spectators at Covo when the Zodiac Killers played in Bologna and the same day the International Noise Conspiracy played at a different club in town.
Stefano: The Swedish are everywhere. A population of seven million and it seems each one of them plays music. Fuck 'em.
Greg: When is your full length coming out, and how come I'm not getting to put it out?
Shiba: It should be out in March.
Stefano: It will precede this interview and you already know why you're not getting to put it out.
Greg: Yeah, but the readers want to know.
Stefano: Okay, we got it from a good source that you were working on the new Green Day songs and you were too busy to pay attention to us. But I agree with you: first money, then pleasure. I know, your version is different. Too many bands were waiting before us and it wasn't nice to pass over them. It wasn't a problem. So I asked another label to put it out. Rip Off and Demolition Derby both are great labels. Demolition Derby published the New Bomb Turks and Electric Frankenstein, just to name a few. Kris Verreth works in a good way and we are very glad to be on his label.
Greg: Now a classic question. Your future plans?
Stefano: First of all, we wanna keep our rock'n'roll as honest and unbullshit as possible. We will record new stuff and put it out on Rip Off, Demolition Derby, or Virgin Records. What else?
Roberto: Play live and put up our website.
Stefano: Now stop this shit!
Shiba: Yeah, it's enough. Ciao, Greg! 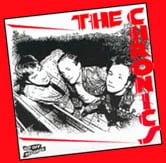