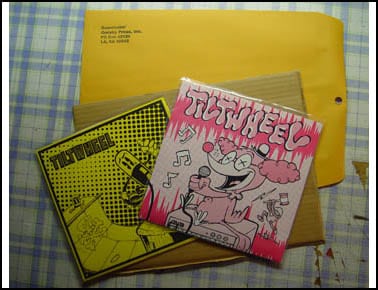 The new postal regulations are wacky and they’re expensive. Here’s a quick guide to save you some money on sending vinyl in the mail.

Disclaimer: This isn’t a “cheat” of the postal service. I believe that this is a valid, legal way to send 7”s, using the USPS’ own rules.

With the new postal regulations, Media Mail, which used to be the no-brainer way of sending all vinyl domestically, is more expensive than First Class for the first eight ounces. Here’s how to send a package up to 8 ounces cheaper than Media Mail, or a 9 ounce package for 3 cents more than Media Mail if you follow all of the stipulations below.

For a full-blown postal chart, as of May 15, 2007, check out this PDF from the USPS. The first page of the Notice 123 Ratefold is where we spend all of our time in this tutorial. http://pe.usps.gov/cpim/ftp/notices/not123/not123.pdf

1.) If you do a lot of mailing, try to make friends with your postal employees. They’re the gate keepers. If you get along with them, they’ll often help you out, give you tips, explain the rules. Be cool.

2.) If you do a lot of mailing, invest in a digital scale that’s accurate to the tenth of an ounce. We pre-weigh our packages and write in the amount of postage we’re expecting to pay. If there are discrepancies, that’s the time to talk with the postal employees.

Piece of cardboard slightly smaller than 9” X 12” (Ask grocery stores, hardware stores, restaurants for boxes - they’re usually pretty cool about it - and cut them down to size.)

The new postal system is all about a machine. If you make your package so the post office can use this machine, it’s cheaper. If you don’t follow all of the following steps, they can dock you and charge you more. (Sometimes they don’t. That’s why you should try to be nice.)

From now on, “square” is an “unusual shape” for the USPS. If you cut a 9” X 12” envelope down into a square, it’s more expensive, even if it weighs less than the rectangle. Don’t confuse them or get into the argument that all squares are rectangles because how their minimum width and lengths are set up trumps that argument. A 9” X 12” envelope is a great, standard-material way to go.

The USPS is now also worried about thickness. What we’re shooting for is a package that fits the criteria for “Large Envelopes” and doesn’t fall into the “Packages” category. My local offices swear that Large Envelopes can’t be more than a ¼” (I disagree) but for sending up to three 7”s, it’s less than a ¼”, so it’s fine.

How to package the one, two, or three 7”s. (I’ll use the example of two, but it works for all three scenarios.)

On the slightly smaller than 9” X 12” piece of cardboard, place your 7”s. Over the 7”s, tape a piece of paper over them (so you’re not putting adhesive on the 7”s) to the cardboard. 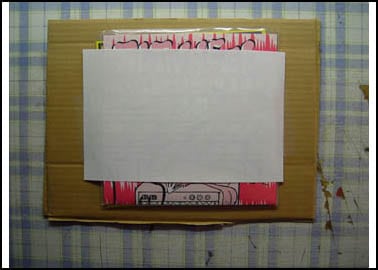 Insert the cardboard and 7”s into the envelope. 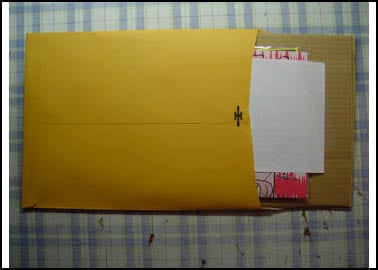 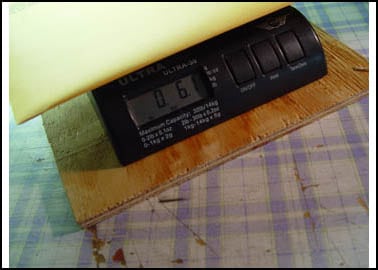 If you’re even a fraction of an ounce over (See picture above. It’s 6.1 ounces,) you get charged for the entire ounce. (In the picture, you’d get charged the 7 ounce rate.)

Two 7”s, cardboard, and envelope can weigh 6 ounces. If you are over, shave off some cardboard.

If the weight is correct and your envelope has a clasp, do not use the clasp. Tuck it behind the flap and use heavy duty tape to seal it. If the clasp is exposed, you will be charged more, a “non-machinable surcharge.”

Stamp or note that “Phonograph Records Inside” and “Please Do Not Bend” is good, too.

* The only point of possible contention that no one I’ve encountered at the USPS is clear on is that their rules state that “Pieces that are rigid, nonrectangular, or not uniformly thick pay package rates.” Technically, the packaging isn’t rigid. It’s not a box. It’s a manila envelope. This reasoning has worked so far.