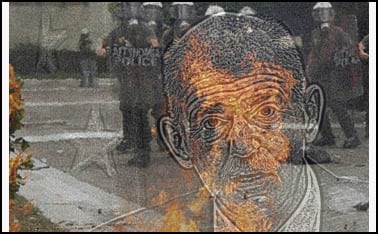 The Budget Crisis and Other Swindles: Part 2

The Washington drama of the debt crisis has been “resolved,” but what does that mean? The crisis began when those most responsible for causing the deficit—Republicans—threatened to vote down a debt-extension bill unless President Obama accepted steep cuts in the U.S. budget. Obama responded by doing what he does best: agreeing with the Republicans.

The new Obama-GOP budget law calls for $2.1 trillion in spending reductions over the next ten years. The first $917 billion will be achieved by capping discretionary expenditure. (Government spending is divided into two categories: mandatory, such as Social Security and Medicare, and discretionary, which is just about everything else.) A new congressional committee, made up of six Democrats and six Republicans, will create a plan to cut the remaining $1.2 trillion. If the committee fails to agree, or its proposal is not enacted into law, there will be automatic across-the-board cuts in discretionary spending—without tax increases—beginning in 2013.

Republican congressional leaders said that the deal gave them 98% of what they wanted and, for once, they were telling the truth. After signing the deal, Obama called for a tax increase on millionaires, but he was only posturing. He already gave away the chance to insist on tax increases in return for reductions in spending.

Republicans are fanatical about keeping George W. Bush’s low tax rates for the rich, arguing that policy will allow the wealthy to invest and create jobs. Of course, while Bush was in office, the rich used their tax breaks to invest in Wall Street scams that wrecked the world economy, leaving right-wing economic theory with a credibility gap too big to show on any chart or graph.

So pardon me as I continue to violate longstanding media practice by citing the opinions of experts who have actually been right in the past. Of the budget deal, Joseph Stiglitz, winner of the Nobel Prize in economics, wrote: “the single best remedy would be to put America back to work. The recent debt deal is a move in the wrong direction.”

The cuts mandated by the new law will fall heavily on programs related to education, housing, and assistance for the poor and unemployed. Barriers to social mobility will be reinforced. Medicaid, which provides health care to low-income Americans, will be especially vulnerable, as will Food Stamps. The resulting poverty and desperation will make labor even cheaper, which is the real reason for the budget cuts.

As we saw in my previous article on this subject, the best way to bring down the deficit is to re-start the economy. That will require direct government spending to create jobs, rebuild the country’s infrastructure, and increase consumer demand. Dean Baker, an economist who has made remarkably accurate forecasts, pointed out the problem: “we had a collapse of epic proportions when the housing bubble burst. We’re sitting here with 25 million people unemployed, underemployed or out of the workforce altogether, and that’s what caused the budget deficit.”

If we want to see where America is headed, we can look to the crisis in Greece. Greece’s creditors are demanding payments that the government can’t afford. The country is one of seventeen that use the European Union’s single currency (the euro), so political leaders across Europe worry that a Greek default could bring down the entire currency area. The European Union provided an emergency loan in May 2010. The Greek government agreed to draconian budget cuts in return for the loan.

As in the U.S., media “experts” reported that the spending reductions were needed to create a sound footing for economic growth. But the Greek economy collapsed. The country’s Gross Domestic Product actually shrank at the staggering annual rate of 7.3% during the second quarter of 2011. As a result, revenues are falling, making the deficit problem worse. Likewise, unemployment is estimated at 16%, while unemployment among those aged 15-24 has reached 43%. Homelessness is rising sharply, and there is a humanitarian crisis in the capital, Athens, where emergency services are stretched beyond capacity.

Investigative journalist Greg Palast has a chapter on Greece in his upcoming book Vultures’ Picnic, so I asked him what the Greek government should do. “Number one: get off the fucking euro,” he replied. “It’s not a currency; it’s a means of plunder.” Palast explained that “the purpose of the euro was to take away the ability of government to use monetary and fiscal policy to help the economy.”

Back in 2000, he wrote an article warning against the new EU currency, because of its strict limits on government policy: “the conditions for entering the euro—limiting annual deficits to 3 per cent of GDP and total debt outstanding to 60 per cent—leave little room for active government.” There is even less room after revenues fall due to a global economic crash.

The euro has the same basic effect as the U.S. budget deal. Governments cut spending to make up for lost revenues. That weakens the economy, diminishes revenues, and prompts more spending cuts. Greece has been hit hardest by the euro scam, but Italy, Portugal, Spain, and Ireland are all on the firing line. As in America, the only winners are the rich, who profit from cheap labor, high interest on Greek debt, and currency speculation.

Greece’s problems didn’t start with the euro or the economic crash, of course. The government is rife with corruption, particularly in the form of wholesale defiance of tax laws by the wealthy. But the double punch of single currency and recession caused the situation to deteriorate horrifically.

In addition to rejecting the euro and returning to Greece’s former currency, the drachma, Palast offers the Greek government another way out of the trap:

1. Announce that the debt will not be paid. That will cause the price of Greece’s debt, in the form of government bonds, to plummet.
2. When the price of bonds drops to 10% of the current value, the government buys up as many bonds as possible.

“You just bought yourself 90% debt relief,” he explained. “Papandreou [the prime minister] could do that tomorrow.” But wouldn’t that bring the wrath of the banks and damage the economy in the long term?

Palast noted the experience of Argentina. In 2002, that country defied the bankers by ceasing the harsh budget cuts the International Monetary Fund demanded and defaulting on part of the country’s debt. “When Argentina was relieved of that burden, the economy boomed, instead of the great destruction that was predicted.” Despite months of mass protest, Papandreou’s government continues hacking away at the budget and Greece’s economy. “The anger in the streets needs to turn into a political force,” Palast said.

Here in America, we still need to reach the stage of anger in the streets, though the recent effort to occupy Wall Street is a start. The danger is clear, and so is the identity of the enemy.

FOOTNOTE: Georgios Papandreou resigned on November 9. His replacement is Lucas Papademos, the former vice president of the European Central Bank, which oversaw the transition to the euro. Papademos is supported by the two largest parties in the Greek parliament.