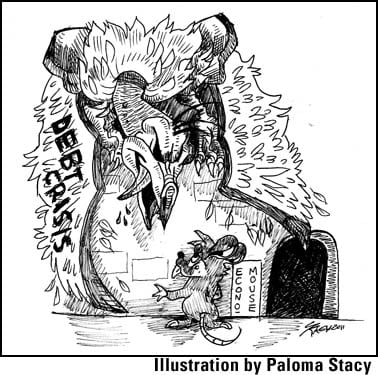 The Budget Crisis and Other Swindles: Part 1

Midsummer brought another sequel to the ridiculous cowboy movie that is American politics. Corporate media covered the debt-ceiling “showdown” round the clock, but failed to give honest answers to the most basic questions:

What are the causes of our rising national debt? Is it as big a problem as advertised?

To get the answers, we’ll need to consult the work of experts who have actually been right in the past. That leaves out everyone who said that George W. Bush’s tax cuts for the rich would create millions of jobs and dramatically reduce the national debt. (Under Bush, America experienced a net loss of jobs and the national debt rose from $5.7 trillion to $10.6 trillion.) We can also exclude the financial wizards who thought that the Iraq War would bring cheap gas prices at little cost to the U.S. economy. (In addition to the war’s human toll, the monetary cost was $3 trillion.) In other words, you can ignore all the conservative and libertarian analysts, along with just about everyone else currently hyperventilating about government finances.

Here are some economists and institutions that have been right. Dean Baker was one of the first to warn of the housing bubble and the dangers of George W. Bush’s policies. Joseph Stiglitz won a Nobel Prize in economics and detailed the costs of the Iraq War. The non-partisan Congressional Budget Office (CBO) provides useful information on the impact of government policy.

So what’s causing all the federal red ink, and how big a problem is it?

First, it’s important to distinguish between the deficit, which is the amount by which federal expenditures exceed revenue, and the national debt, which is the total of current and prior deficits. The former figure comes to about $1.4 trillion, while the latter is approximately $14.5 trillion.

Even so, the worst single culprit is the dire U.S. economy, which has hardly begun to recover from the 2007-08 collapse caused by Wall Street crime. A weak economy results in lower tax receipts and higher government expenditures on relief programs such as Food Stamps. The CBPP report places this year’s budget loss from the economic downturn at $404 billion. (Here is a link to the report’s findings, with a chart.) Dean Baker estimated the impact to be even greater. “If the unemployment rate was back at the 4.7 percent rate of 2007,” he wrote, “the bulk of the deficit would disappear.”

Baker and other actual experts will tell you that we won’t lower unemployment without direct government spending to help the economy. In 2009, for instance, Joseph Stiglitz argued in favor of New Deal-style programs to hire workers for the task of rebuilding the country’s crumbling infrastructure: schools, transportation, etc. In February of that year, Congress passed, and President Obama signed into law, a stimulus plan with $862 billion in tax cuts and new spending, spread out over ten years. Stiglitz stated that the new law did not go far enough, and, in August 2009, he advocated a second one. “What is needed now is another dose of fiscal stimulus,” he wrote. “If that does not happen, we can look forward to an even longer period in which the economy operates below capacity, with high unemployment.”

There was no second dose, and high unemployment continued. Dean Baker explained the problem: because of the crash of 2007-08, “the private sector lost more than $1.2 trillion in annual demand.” “Businesses invest and hire when they see demand for their products,” but when consumers are broke, demand remains low. “If the government did not spend money, no one was going to,” he added.

Conservatives claim that the stimulus program didn’t work, but a report by the Congressional Budget Office shows that Stiglitz and Baker were right: the policy had a positive impact, but was too small to produce substantial growth. The CBO concluded that the program “lowered the unemployment rate by between 0.7 percentage points and 1.8 percentage points,” and “increased the number of people employed by between 1.4 million and 3.3 million.” That modest achievement is far greater than any positive effects from the conservatives’ approach of constantly cutting taxes for the rich.

The debt is a symptom of a larger crisis. If the politicians want to reduce red ink, they need to spend on creating jobs and improving consumer demand.

But there’s one more question: What will be the result of President Obama’s deal with congressional Republicans?

The short answer is “disaster.” The long answer will come in Part 2.