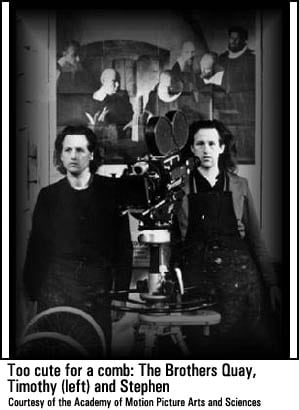 The Brothers Quay: Dwelling in Phantasmagoria

When I was a bored teenager growing up in L.A., my best friend was cable television. This was before the onslaught of the internet, IM, mySpace, or even cell phones, but après Z Channel, so bear in mind, MTV was my best buddy. I would sit transfixed by the blare of its glow in my darkened (on purpose) room. Between practicing amateur witchcraft, dabbling with the latest failed suicide attempt a la Harold Parker Chasen, and listening to a lot of gloom and doom and death rock, I had no other contact with the outside world besides MTV. During this isolation stage, I did a lot of artistic research and found myself immersed in what would be called just plain old pathetic depression. Growing up is hard, but growing up makes you more susceptible to escapism by books and images. The most disturbing yet hauntingly beautiful piece on MTV was a promo for the dastardly network itself. It was stop-animated by whom I just came to discover as The Brothers Quay. 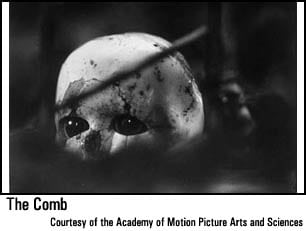 The MTV promo was from Stille Nacht I (1988). It’s a macabre vision of a dusty doll, seated at the dinner table while fine metal shavings take over its environs, growing like a festering fungus all around, concluding its march at the doll’s dinner bowl. Magnets are used to control the movement of these fine hairs of metal, creating an eerie, life-like movement to an otherwise cold and useless material. All of this was masterfully executed in miniature—all of it stop-animated the old fashioned way. I can not erase the memory of watching this vision bathed in blue while slitting my wrists and putting plastic bags over my head to suffocate…

The Brothers Quay, Timothy and Stephen, are identical twins from Philadelphia. Born to a figure skater mother and an engineer father, they quickly became the perfect aesthetic product of their union, both whimsical and practical. When viewing their works you can definitely see the lyrical beauty of movement and adornment coming from their mother’s influence and the constructive utilitarianism of their father’s mechanical mind. The Quays moved from America to London to study at the Royal Art Academy, where they still continue to reside and work at their studio, Atelier Koninck. They are often compared to Czech animator, Jan Svanmajer, who they cite as a major influence.

I had the pleasure of attending their first retrospective screening and press reception event at the Academy of Motion Picture Arts and Sciences, as part of the 10th Annual Marc Davis Lecture on Animation (Thank you so much, Teni!) The press reception was open bar… Two vodka tonics later, I found myself less than a foot away from the Brothers Quay. I socially choked and just flashed them perplexed and uncomfortable smiles. I could tell they wanted to come say hi but we really had no “in” with each other. What the fuck was I gonna do? Ask the Brothers Quay if they like Super Chinchilla Rescue Mission? That would have been funny. Okay, so with my battered and bruised ego in tow, I took a seat in the far back of the auditorium for the screening. 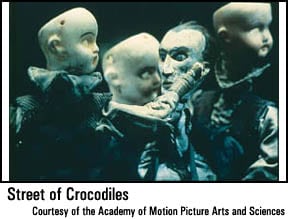 The Brothers Quay took to the podium and explained every piece as they were presented. Stille Nacht I and Street of Crocodiles (1986) featured puppets in a resplendent grimy glory, Cabinet of Jan Svankmajer, Prague’s Alchemist of Film (1984), Stille Nacht III or Tales from the Vienna Woods (1992), and The Phantom Museum (2003) presented their use of objects and shadow as a symbiotic partnership in film (think almost German expressionist here). The Epic of Gilagamesh (1985) was most imbued by their father’s old tinkering in the shed, mixed with a little bit of Fritz Lang. Architecture and Space was interpreted through the works Rehearsals for Extinct Anatomies (1987), Institute Benjamenta (1995) and a personal favorite of mine, Anamorphosis (as commissioned by the Getty). The apex of the evening’s program was the full screening of In Absentia (2000), a BBC-commissioned masterpiece interpretation of composer Karlheinz Stockhausen’s music set to a daunting display of light and shadows. The short is timed perfectly with the music itself. One of the Quays pointed out that the composer himself accused them of possessing the power of ESP to bring forth these images set to his own music, as his mother was in a concentration camp and he was reminded of her during the scenes where a lone woman with shorn hair sits on a chair with a close up of just her neck from the back. The film was shot in black and white and then projected in CinemaScope, lending a mysterious jade overtone to the film and revealing the mental disintegration of a woman who writes the same letter to her family over and over again from an asylum. Her name was Emma Haulk. The film starts with a dedication to her. I can not even begin to tell you how intimately disturbing it was to see this film.

The program closed with a collection of some humorous advertisements they had made throughout the years for Dulux, Nikon, and Round-up Weed killer (“Hank, I can’t feel my roots!”; banned in the U.S. due to complaints from Vietnam veterans). They candidly pointed out that the commercials were made to fund their personal projects, hence giving the word “commercial” a literal meaning in their repertoire. I was disappointed that they did not show Stille Nacht II with music from His Name Is Alive, but overall, it was a thrilling experience being surrounded by such singularly adroit and extraordinary visions for five whole hours. The Brothers answered some complex and not so complex questions from the audience and I couldn’t help thinking if Fred Stuhr was watching this from heaven or if Floria Sigismondi was stalking them in the aisles.

Sometimes, I felt a little guilty for not trying to be more outgoing, but I could tell by the other presence of the “normal” press that I wasn’t the only one who was socially awkward. The Brothers never come out of their studio so this was a particularly rare appearance for them to make, especially being so far away from their native environs. Everyone was really in awe of them, as if they were a charming, inter-dimensional, dusty Victorian puppet (like those found in their work) sheathed in modern Yohji Yamamoto separates and defiantly dishelved grey hair.

So, I never grew out of my awkward, depressed stage. So what? If depression led me here tonight, then fuck being Miss Popularity or Most Likely To Succeed. I’d rather watch The Brothers Quay and revel in my cute weirdness.