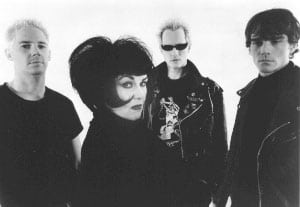 Unadulterated pure primal American rock'n'roll… a sourmash swirl of venomous satanflash voodoobilly sonic raunch… a nipple-twerpin' noggin-thumpin' ear-bruisin' slice of rampaging musical mayhem… barhound sloshed-to-the-gills down'n'dirty dizzyin' punk-grit-blues… the explosively hair-raisin' rock'n'roll equivalent of Frankenstein monster's first blood-curdling roar of skin-crawlin' electrically torched madness! Ladies and gentlemen, without any further aimless ado, I present to you the fabulously ferocious Blue Flames! And, by the way, a thunderous applause of thanks is drunkenly due to Kimberly Boyce for her photographic expertise and finger-clickin' typing skills, and to the infinitely inimitable Blue Flames for rabidly re-igniting the (sometimes) flickering flame of rock-and-fucking-roll… 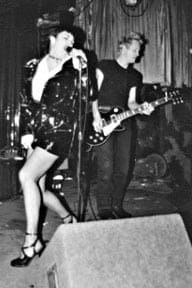 Blackie: Not to belabor the point, but Patti Smith's voice gets me all worked up into a sweaty mess. The number one pick for me would have to be Patti Smith, "Radio Ethiopia."
JP: I can't choose one record. The main faves are rootsy punk that I could only hear on record because I was too young to see them live. But seeing bands live has a lot to do with my overall mind set.
Rog: What provocative portion of the human anatomy do ya find most tastily titillating and erotically sensuous? By all means, be graphically specific.
Kayce: Good buttocks and necks. Hard buns are such a great ass-set. Not flat, saggy, or hairy... I advise everyone to shave the slightest fuzz. Necks are so soft - you can whisper naughty things and give your guy chills by exhaling as you just touch his neck with your lips, and then... give him just the tiniest little bite... he shivered as her teeth nipped his sensitive flesh. She gasped and pressed her yearning flesh against his masculine length... he moved to take her mouth with a demanding thrust of his tongue, teasing her with pleasure so unbearable she thought there could be none grea - Ummh - where was I? Oh yeah... Necks! Necks are good!
Blackie: Well, I personally like the dark-haired, biochested, kinky lookin' Bettye Page types. But as for a specific anatomical part, I'd have to say I'm definitely an up-the-skirt kind of guy! Very short skirts, given my predilection for voyeurism.
JP: The most tittily tastilating portion of the human anatomy would have to be my girlfriend, and her girlfriends' private parts.
Rodney: This question brings to mind an Andrew Dice Clay bit where he recalls Pee Wee Herman's masturbation arrest... arguing that, "he's looking at a '50 foot pussy'". No shit man, a 50 foot pussy!
Rog: Since death is an ominously ever-present eventuality, which of these worst case scenarios of an untimely demise would be most torturously devastating to you? Clumsily falling into the pit of an active volcano and burning to a charbroiled crisp; being smashed into a pulverized mess of a flat-as-a-pancake flesh by a careening-out-of-control satellite which swooshes from the sky and crashes through your rooftop; having the morose misfortune of Rosie O'Donell sittin' on your face and causing you to suffocate in a squishy, smothering swirl of blubberly flab; or frantically falling from an approaching aircraft in Seattle and becoming precariously impaled on the razor-sharp point of the skyward-bound Space Needle (Wow - talk about extreme body piercing!)?! Also - if given a choice, what method of breathlessly leaping headfirst into the precpitable void of death would you find most adequately preferable? For example, I'd like to depart this mortal coil in a blaze of glory by ridin' a rapidly falling A-bomb like a rodeo bull (i.e. Slim Pickens in "Dr. Strangelove") to its final point of final point of explosive impact at Ground Zero, Planet Earth - yeeeeefuckin' haw, indeed!
Kayce: Dying by falling into a volcano - burning can't be very positive. Besides - I'm no virgin! If I had to go, it would be in my built-for-speed '66 hot rod Ford Mustang... out cat-and-mousing the cops until they were pissed off to the extreme, and just as they thought they were going to catch me - make it look as if I were the victim of the "Gestapo Tactic" (which HAS happened to me). Then I'd make my break, and crash in a ball of flame into a billboard that said, "Dr. Pepper - The Quicker Pepper-Upper". I just love Dr. Pepper!
Blackie: Rosie O'Donell sitting on my face is too scary to even think about. I can't believe you even brought that up, damn you! I'm going to have nightmares! If I had a preference, I'd like to go out with a cerebral hemorrhage induced by a night of indescribably wild sex! Everything - everywhere - all at once!
JP: Having Ed Gein rise from the dead, and chop me up for a part of his mother's ass, would be a shitty way to die. The way I'd like to go? Shit, I don't think about dying - I'm not on heroin!
Rodney: I'd like to be drivin' and dyin' in Texas... like an armadillo. Official Texas roadkill.
Rog: Any craftily conjured closing comments? Enlighten us about the aural inducements of Big D... what most makes it your hootenanny of a home? Also, what are your grand musical aspirations for the ever rapidly approaching future?
Kayce: We live in the most incredible place for sideways influences, like "cow" and "punk." Was that ever supposed to go together?
The Flames will continue to have a Texas-size flamboyance, undercurrents of rage, and outright wild love in strange places. It's thrown out in the air and gets in your veins. It makes you wiggle in your panties, throw your head back, and let out a holler! If The Blue Flames don't make you don't make you want to howl, then I have failed - and I'd NEVER do THAT!!! Kisses... Kisses...
Blackie: We're laying the groundwork for our next music video, and short tours on the West Coast and the Chicago and Midwest. We're happy to talk to record companies, or anyone who'd like to sponsor us (I'd like to make it clear that we have absolutely no objection to drinking ANY kind of beer). In the future, I predict that people will chase us through the streets, screaming and yelling and waving their underwear at us!
JP: You'd have to be a D-city rocker to know how the flame-shufflin' boogie goes... or we'll show when you see The Blue Flames live.
Rodney: I would tell all those in search of punk'n'roll from the "heart" to look to the cheap, beer-fueled, hopped-up-on-goofballs punk bands from Texas. More specifically, the black heart of Texas - Dallas, and the tainted yellow rose that is The Blue Flames.