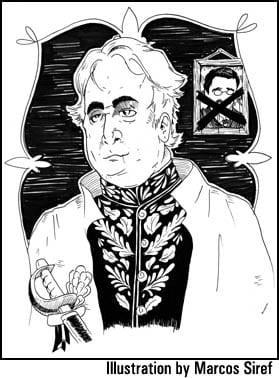 Death has slowed its pace in Iraq, but the Second Gulf War’s human cost continues to rise. Nearly 4,400 U.S. military personnel have died in the conflict. Estimates of the number of Iraqis killed range from 151,000 to more than one million. Compared to the last year of Saddam Hussein’s regime, an Iraqi was 3.6 times more likely to die in 2006—and the cause of death was 120 times more likely to be violence.

George W. Bush received a lot of help when he took the U.S. into this war. A horde of journalists and commentators echoed the administration’s talking points. Even liberal outlets like TheNew York Times printed stories indistinguishable from White House press releases. Though their reports and predictions have proven disastrously false, Bush’s media allies refuse to let that spoil their fun. Denying America the benefit of their silence, the hucksters continue to peddle their discredited policies. Of that coalition of the lying, Christopher Hitchens is the most relentless.

The main justification for invading Iraq was the claim that Saddam Hussein possessed weapons of mass destruction. Hitchens did his best to assist the president’s scare tactics. In a piece published in The Nation on October 14, 2002, he wrote that “there is not the least doubt that [Hussein] has acquired some of the means of genocide and hopes to collect some more.” While he hedged slightly in that statement (do tanks count as means of genocide?), Hitchens clearly wanted his readers to believe that Iraq’s arsenal included biological, chemical and/or nuclear armaments.

That lie evaporated quickly in the months after Saddam’s fall. In January 2005, the Bush administration finally admitted that there were no weapons of mass destruction in Iraq, but that wasn’t good enough for Hitchens. In 2006, he explained the missing WMDs this way:

“Doesn't anything ever strike you as odd about the figure of zero for [WMD] deposits found in Iraq? . . . Doesn't that suggest a crime scene that has been pretty well dusted in advance, the fingerprints wiped? Well, it does to me.”

Let’s draw out the implications of that theory. It’s the eve of the Second Gulf War and Saddam Hussein controls weapons of mass destruction. He does not announce that the WMDs exist, though that might have made Bush think twice before launching an attack. Nor does this perpetrator of genocide deploy his most lethal ordnance against the invading forces. On the contrary, Saddam orders the weapons hidden (where?) and all trace of their existence eliminated—an amazing feat for his ramshackle military establishment.

He then sits back and allows his forces to be routed, even though that means death for him and his sons. In other words, rather than kill as many of his enemies as possible, the Butcher of Baghdad decided to play an elaborate but feeble prank worthy of TV’s Bloopers and Practical Jokes. I guess he really was an unpredictable madman.

The other main pretext for starting the Second Gulf War was the charge that Saddam Hussein was behind the September 11 attacks. No credible evidence linked Iraq to al Qaeda, so the Bush team seized upon an unverified report that 9/11 hijacker Mohamed Atta had gone to Prague in the spring of 2001 to meet with an Iraqi official named Ahmad al-Ani.

In his October 2002 column in The Nation, Hitchens propped up that story. He discussed his meeting with “the senior Czech official who investigated the case of Mohamed Atta’s visit to Prague.” According to Hitchens, the official said that it was “‘70 percent likely’ that Atta came to Prague to meet Al-Ani.” That assessment repeated the administration’s line.

True to form, the Bush gang suppressed the fact that the CIA investigated the Prague report and dismissed it in June 2002. If it annoyed Hitchens that his executive-branch heroes hid the facts from him and others in the press, he never let on.

Hitchens coupled exaggerations of the Iraqi threat with rosy predictions for the war. In August 2002, he assured his readers that, if the U.S. invaded Iraq, “the influence of the revolting Saudis, in the region and in America, would be correspondingly reduced.”

How? During a debate at the University of California-Berkeley in January 2003, the writer elaborated: “When that Iraqi [oil] pumping starts again, when they can call their oil their own . . . the Saudi Arabian oil monopoly in the region will be broken forever.”

Not quite. The occupation of Iraq left the Saudi monopoly intact. It also triggered an enormous rise in oil prices, which allowed the House of Saud to make a commensurate increase in its foreign holdings. In May 2008, the government-sanctioned Saudi newspaper Arab News boasted that “total foreign assets are expected to exceed $475 billion at the end of this year, up from just $73 billion at end-2002.” That is a 550% increase.

A large portion of those new investments went toward buying up America. The Treasury Department reports that oil-exporting countries’ ownership of U.S. government securities rose from $42.4 billion at the outset of the Second Gulf War to $186.6 billion in the month that Bush left office. (There is no separate listing for Saudi Arabia in that report.) That is a 340% increase. The past decade will be remembered as a time of falsehoods, none more outlandish than Hitchens’s claim that a president named Bush would undercut the Saudis.

As the passage of time destroyed Hitchens’s fables, he created new absurdities. One such episode was his review of Fahrenheit 9/11. He loathed every aspect of that film, asserting that director Michael Moore “prefers leaden sarcasm to irony and, indeed, may not appreciate the distinction.” Most of all, Hitchens was outraged that Moore raised the question of social class and military service. The film shows that it is working-class Americans who fight in the nation’s wars, while the rich profit from them—especially in the case of Iraq. That point prompted this response from the Bush apologist:

“Would [Moore] have abandoned Gettysburg because the Union allowed civilians to pay proxies to serve in their place? Would he have supported the antidraft (and very antiblack) riots against Lincoln in New York?”

It’s a good thing Hitchens is opposed to leaden sarcasm, or those questions might have ended up sounding idiotic. If he truly cannot tell the difference between a civil war started by treasonous slaveholders and the Bushites’ armed corporate takeover of Iraq, then no words will help him make that distinction. Having shown that he was way out of his depth on the question of moral equivalence, Hitchens offered Moore “a short word of advice: In general, it’s highly unwise to quote Orwell if you are already way out of your depth on the question of moral equivalence.”

Needless to say, Hitchens frequently quotes George Orwell in the context of Iraq. He is fond of comparing the Second Gulf War to the struggle against fascism during the Spanish Civil War—a conflict in which Orwell served as both soldier and chronicler. Of the anti-fascist stronghold in Barcelona, Orwell wrote: “I recognized it immediately as a state of affairs worth fighting for.” There is no reason to believe that the author/infantryman would have used the same words in reference to Halliburton’s offices in the Green Zone, but that fact has not stopped Hitchens from citing Orwell’s Barcelona quote to justify the Iraq war.

Of course, Orwell is relevant, chiefly because he presaged the language of the Bush regime so exactly in 1984. In one of that book’s most chilling passages,the main character’s country, Oceania, switches sides in its never-ending war. Government propagandists quickly re-write history: “Oceania had always been at war with Eastasia.”

Bush’s Eastasia moment came during a 2006 press conference, when a reporter asked about the administration’s efforts to blame Saddam for 9/11:

As grotesque as it was for Bush to lie about his lies, he has nothing on Hitchens when it comes to copying the deceits of Orwellian functionaries. The self-appointed defender of Orwell’s legacy said this at the 2003 UC-Berkeley debate: “There will be no war. There will be a fairly brief and ruthless military intervention to remove the Saddam Hussein regime.”

So, to review, the Second Gulf War is actually a non-war fought (un-fought?) to liberate Iraqis by dramatically increasing their chances of being killed. Also, we had to save the world from Saddam Hussein’s weapons of mass destruction. We know that those weapons existed because there is no evidence for their existence. Likewise, the non-war weakened the House of Saud by enhancing that family’s wealth and influence. If you disapprove of the fact that the Americans killed in Iraq are overwhelmingly working class, then you are probably the sort of person who would have opposed fighting the Confederacy. Finally, if George Orwell were alive, he would endorse Operation Iraqi Freedom—rather than, say, writing an update of 1984 and basing a character at the Ministry of Truth on Christopher Hitchens.

Hitchens’s stack of falsehoods formed an imposing backdrop to his 2007 article about a young man who served in the military. Influenced by Hitchens’s writings in favor of the Second Gulf War, Mark Daily enlisted in the army and deployed to Iraq in November 2006. Two months later, Lieutenant Daily lost his life.

In his article, Hitchens asked who was responsible for Daily’s death, and, by extension, the deaths of other American troops in Iraq. (Iraqi losses do not interest him much.) Was it “the Ba’thist and bin Ladenist riffraff who place bombs where they will do the most harm?” Yes, but there is also the obvious question of whether our troops should have been in Iraq in the first place. Likewise, how did the “bin Ladenist riffraff” come to be in that country? Al Qaeda did not have a foothold there before the U.S. invasion.

Perhaps blame should fall on “the Rumsfeld doctrine, which sent American soldiers to Iraq in insufficient numbers and with inadequate equipment,” or on “the Bush administration, which thought Iraq would be easily pacified.” Yes, how foolish it was to expect a cakewalk.

Maybe responsibility lies with “the previous Bush administration, which left Saddam Hussein in power in 1991 and fatally postponed the time of reckoning.” During the First Gulf War, Iraq was blighted by the same deep religious divisions as today. An occupation of that country in 1991 might have saved Mark Daily, but would have sacrificed another soldier in an equally fruitless venture.

Many of those mentioned by Hitchens deserve blame for American casualties in Iraq, but his list seems a little short. The author could find a more complete answer to his questions about culpability in a 1997 Vanity Fair piece titled “Young Men and War,” written by Christopher Hitchens.

The article dealt with Rudyard Kipling. After many years romanticizing empire in his poems, Kipling wrote pamphlets and speeches endorsing Britain’s participation in the First World War. He also corresponded frequently with Theodore Roosevelt, encouraging the former president’s efforts to push the U.S. into the conflict. As Hitchens summarized: “This relentless drumbeat . . . helped breed a pro-war atmosphere in the United States.” He also noted: “The poet didn’t hesitate to make very emotional appeals, and as a result gave a few hostages to fortune.”

Kipling’s son, John, enlisted in the army and deployed to the Western Front in 1915. A few weeks later, Lieutenant Kipling lost his life. The shock of that event forced the “proud and jingoistic” (Hitchens’s words) Kipling to reflect on his previous actions. At times, the old imperialist channeled his grief into hatred of Germany. On other occasions, however, he wrote poems that contained criticisms of his own support for war. Hitchens cited a few such stanzas in his article.

In one passage quoted by Hitchens, Kipling penned these lines about his countrymen who died in World War I:

Our statecraft, our learning
Delivered them bound to the Pit and
alive to the burning

In another, Kipling gave voice to Britain’s war dead:

If any question why we died,
Tell them, because our fathers lied

When the liar is a mere propagandist rather than a soldier’s parent, the betrayal is less intimate. But the result is the same.