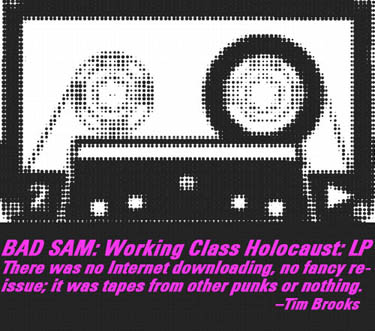 The Best Moments of Razorcake #78 Reviews: Get to Know Your Reviewers

ARMAGEDDOM: Dez Mil Anos De Terror: LP
Nothing new, but it’s done with conviction, and I sure as hell air-guitared to it. –Chris Terry

BAD DADDIES / LOGNHALSMOTTAGNINGEN: Split: 7”
Super scrappy femme-fronted punk. Bratty and loose, like riot grrrl on drugs. Flip it over and shit gets even weirder. –Tim Brooks

BAD SAM: Working Class Holocaust: LP
There was no Internet downloading, no fancy reissue; it was tapes from other punks or nothing. –Tim Brooks

BEAST: Dead or Alive: CD
…they either have their tongues planted firmly enough in cheek or are playing with such conviction they command you to don the denim vest, grow a moustache, crack a Falcon beer, and throw the horns. –Matt Seward

BEAT, THE / MAXIES, THE: Split: 7”
I’ve never had anyone bring up a review of mine as often as Paul Collins has brought up my ((uh, shall we just say, “non-positive?”)) Razorcake review of the Flying High album. And, while I hardly imagine the King of Power Pop was losing sleep for the past five years trying to figure out how to get me back on board again, whatever he’s been doing has been working out pretty well for all parties concerned; I’ve quite enjoyed his last half-decade of live and recorded output. Hooray for the power of positive insults! –Rev. Nørb

BETTER LUCK NEXT TIME: We’ll Take It from Here: CD
It’s competent, but it sounds like garbage. –Bryan Static

BUCK BILOXI AND THE FUCKS: Self-titled: 7”
Who wants to get stabbed anywhere, let alone at your two favorite retail establishments? –Sal Lucci

CANADIAN RIFLE: Deep Ends: 9-song LP
They even add another option to songs to sing at funerals beyond Hickey: “Going to Get Fucked up When You Die.” No goals. No dreams. –Todd Taylor

CASKET CHRONICLE: Self-titled: CD
In one of the only times that I’ll give this advice, it could have used more screaming. Grade: B-. –Bryan Static

CHAIN LETTERS, THE: “Bad Reflection” b/w “Boulevard Girls”: 7”
I think the label art was printed with an inkjet printer. What, the dot matrix printer was in the wash? ­–Rev. Nørb 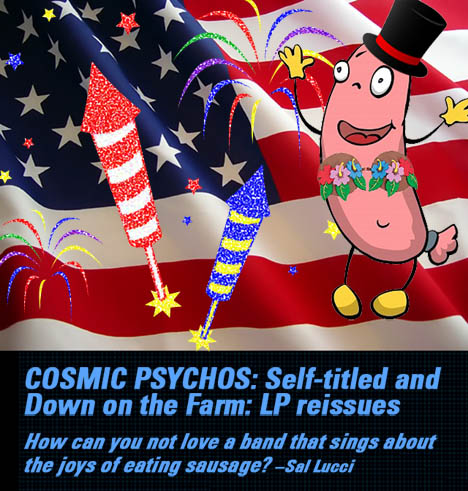 COSMIC PSYCHOS: Self-titled and Down on the Farm: LP reissues
How can you not love a band that sings about the joys of eating sausage? –Sal Lucci

CRIATURAS: Espiritu de Libertad: LP
There’s something about the Spanish language that is perfect for hardcore. –Rich Cocksedge 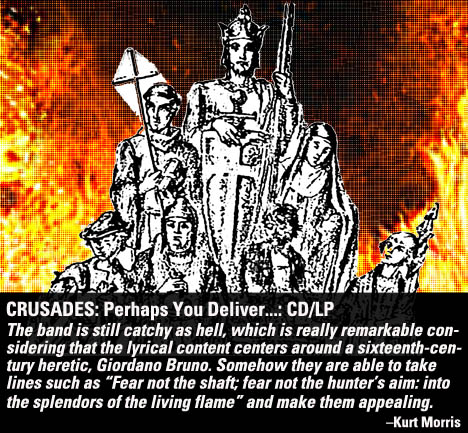 CRUSADES: Perhaps You Deliver This Judgment with Greater Fear Than I Receive It: CD/LP
The band is still catchy as hell, which is really remarkable considering that the lyrical content centers around a sixteenth-century heretic, Giordano Bruno. Somehow they are able to take lines such as “Fear not the shaft; fear not the hunter’s aim: into the splendors of the living flame” and make them appealing. –Kurt Morris 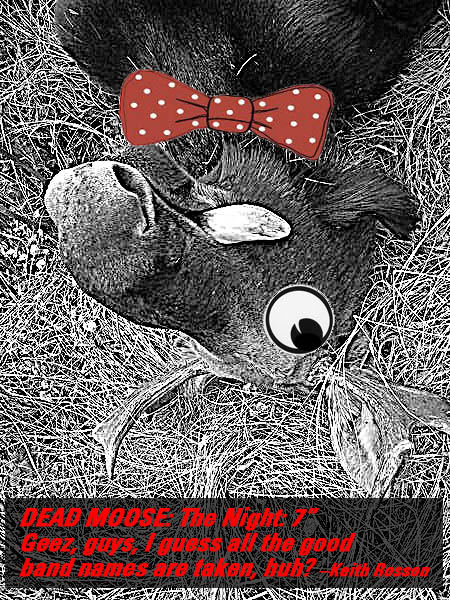 DIRTBOMBS, THE: Ooey Gooey Chewy Ka-Blooey!: CD
…the pervert in me hopes “We Come in the Sunshine” means something filthy. –Sal Lucci 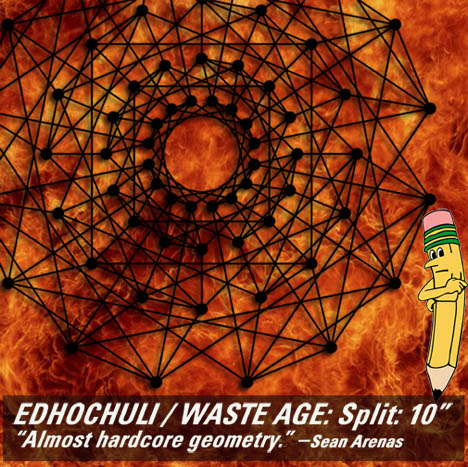 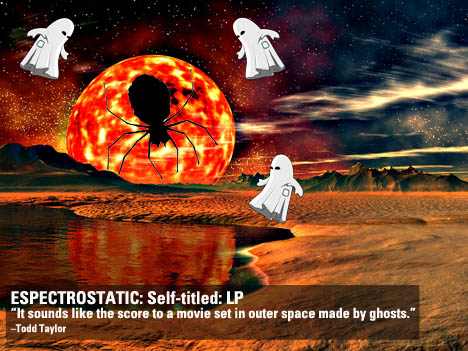 ESPECTROSTATIC: Self-titled: LP
It sounds like the score to a movie set in outer space made by ghosts. –Todd Taylor

FM 359: Some Folks: 7”
Members of Street Dogs and Dropkick Murphys try their damnedest to be the next Eagles. –Jimmy Alvarado

GALACTIC CANNIBAL: We’re Fucked: LP
…dense, riff-heavy, melodic, and mercilessly catchy punk fronted by a veritable sasquatch of a monster on vocals. Variants of the word “fuck” are used no less than forty-six times on this album. –Keith Rosson

HEX BOMBS, THE: None Shall Be Forgotten: 7” EP
Lyrically, it’s is a send-up of American mediocrity from a group that loves their country, but isn’t afraid to view it critically and sing to it satirically— “First in guns / last in science (sports, sports!)”. –Jim Joyce

IDIOT TALK: Self-titled: LP
…let’s face it, who doesn’t like singing, “We hate, fascist cops” at the top of their lungs! –Rich Cocksedge

IT-MEN, THE: Greatest Its: 2 x LP
The fake ringwear that is a part of the sleeve packaging is a perfect metaphor for this band and many others who do the heavy garage rock thing—trying to appear worn-in and vintage without the vibe and guts to do the thing that their heroes did. –Mike Frame

MISCONDUCT: Blood on Our Hands: CD
It’s something you’d expect to be playing in the background of some consumer capitalist-driven teenage-angst crap store in a suburban mall. –Camylle Reynolds

MODERN HUT: Generic Treasure: LP
Everyone knows That Guy. He’s the dude at the party who knows a few chords and is quick enough on his feet to write clever little ditties on the spot. What could have been just another dweeb driving people from the kitchen of a house party turns out to be one of the best records I got for review this month. –Michael T. Fournier

NAH: Difficult: LP
If you told me I’d have this much fun listening to an album where the main instrument is distorted drums, I’d be shocked. –Chris Terry 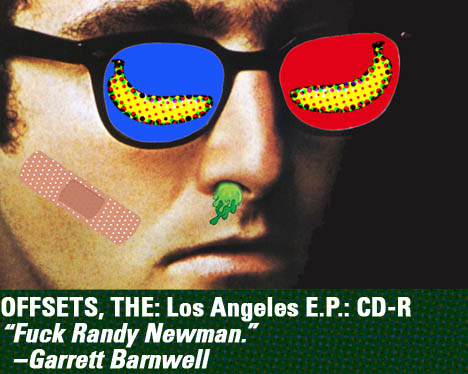 PINK NOISE, THE: Greedy Heart: LP
…a vocalist with a grudge against the natural cadence of human speech sort of talks indifferently about arty things. –Indiana Laub

PULLMEN, THE: Pine Ridge: CDEP
All four men in this country-influenced punk band have facial hair—two with moustaches. Does that help give you an idea of what you’re getting with these four songs? –Kurt Morris 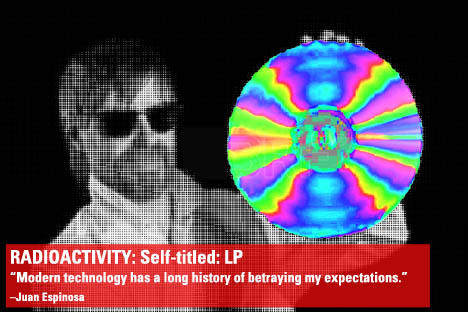 SNAKE CHARMER: Self-titled: EP
How much noizecore can you take? –M.Avrg

STEVIE DINNER: Mystery Flavor: Cassette
It looks like the self-consciously quirky sort of shit that really gets on my nerves. –MP Johnson

SWARM, THE: Parasitic Skies: LP
…this album sounds like road construction—with a couple of articulate, morose bridge trolls belting it out over the music. –Keith Rosson

TUNES, THE: Love Uncool: LP
I feel lately we are unearthing a lot of shitty eighties music and calling it power pop. –Billups Allen

VACATION: Candy Waves: LP
Don Henley and Phil Collins do not count. The only singing drummer that springs to mind as actually good is Will Grabass. –Matt Seward

VARIOUS ARTISTS: The Songs of Tony Sly: A Tribute: CD
I’m getting tired of the, “I’m an old punk dude but now I play folky-country-subpar-lazy garbage now” thing. –Dave Williams

VISITORS, THE: Yeti: LP
It’s a style of pop punk that bombards the senses with sugary sweetness and causes auditory hyperglycemia. –Sean Arenas

WIFE BEATERS, THE: The Beat Goes On!: CD
…this album is shit and you should all feel bad about the decisions that got you to play in a band called The Wife Beaters. –Bryan Static