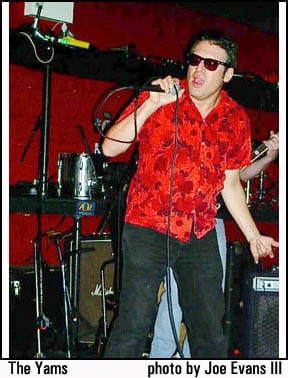 The Aversions, The Leather Uppers, The Shemps, Turpentine Brothers, and The Yams: Live at the Trash Bar on 8/11/06 By Joe

The whole “White trash/hipster” thing has been going on for quite some time now.  Fortunately, the Trash Bar doesn’t really cater to this, per se, instead its name comes from the fact that it’s decorated and furnished by with what was probably found in a junkyard.  Heck, before the show I decided to relax in what looked like some airplane seats.  Anyway, this place was perfect for such a funny/quirky lineup such as this.

First band of the night:  The Yams.  Fronted by notable WFMU DJ Dave the Spazz, they play poppy, catchy garage punk, with songs like “I Was Drunk When I Met ‘Ya” (which was eventually covered by The Shemps later on).  They’re definitely in the “local secret” phase for now, but hopefully more and more people will get into them soon, because they’re really good.  They seemed a little sedate, especially considering Dave’s reputation for going absolutely bananas during shows, but it was probably more due to there not being many people there yet as opposed to them just not being into it.  So think of that next time, before you decide to leave for a show two hours after it started. 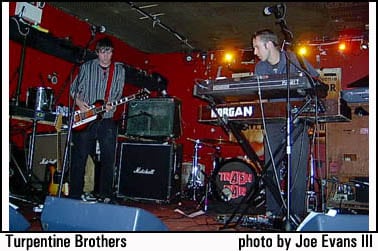 Up next, Turpentine Brothers:  I’d never heard of them that much before, but they impressed the hell out of me.  They have a guitar player, a drummer, and a dude who plays these two organs that I didn’t recognize (yeah yeah, go ahead and laugh), that are hooked up to some sort of weird, vintage-looking amp, that seemed to have some sort of propeller in it.  A typical song for them involves fast, frantic guitar, a solid drum beat, as well as a steady groove from the organ.  They definitely impressed me. 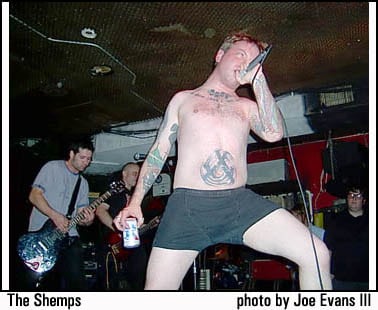 In the middle of it all: The Shemps, another one of the most underrated bands in New York City.  A few things came to mind tonight:  First, I could literally picture The Shemps in the middle of pretty much any show imaginable (they’ve already played some crazy shows as it is), from a Japanese hardcore matinee, to some high school emo band house party; I can safely say The Shemps could still put on a great show.  So they open up with “That’s Great That Sucks” and “Flabbergasted”.  Just a few minutes later, Artie’s shirt is off, followed by his pants.  This is where the second realization comes in; up until now, I’d considered The Shemps one of the best garage rock bands in New York City.  But after seeing them tonight, I’m realizing they’re one of the best rock’n’roll bands going right now.  It’s all there: the tight musicianship, as well as the execution, that will most likely offend and scare the hell out of you at times, and that your parents would probably cringe at.  They pull no punches, kiss no ass, and can’t help but laugh while everyone scratches their heads trying to figure out what to make out of all of it.  One thing is for certain though; despite what you’ve probably heard, The Shemps are it.  It’s almost a wonder how a band like them can even survive these days, but somehow they do, and I’m grateful. 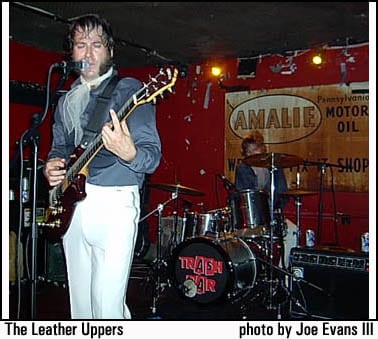 Finally (in the “I’ve been wanting to see them for a while” sense), The Leather Uppers, who’d reunited this year after putting out some great records during the ‘90s, and then breaking up.  You’ve probably never heard them before, so here’s the deal:  Two sharply dressed guys.  Fun, simple, silly songs that are crosses between garage, punk and classic rock.  Nothing but guitar and drums, and they switch back and forth between who plays what.  Totally rocking out (“Did somebody say ‘Keep on rockin!?’”), and playing songs such as “Wizard’s Castle,” “Sugar Sandwich,” “It’s Sexy Time,” and “Don’t Sell Hotdogs Tonight” (which was also covered by The Shemps).  They’re funny as hell, and they completely rock out, no matter what instruments they happen to be playing at the time (“Classy” Craig pulled one mean foot solo at one point towards the end).  This band is proof that you don’t need much to do something really great.  Consider The Leather Uppers to be a band you need to see live if you have the chance. 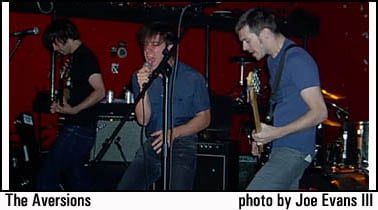 Closing out the night were The Aversions from Canada.  I was pretty tired at this point, but from what I saw, they were a catchy punk band, with some ‘80s underground influence to them.  I mean, I would’ve been happy at this point even if they were terrible, but they were still pretty good, which made things pretty awesome overall.