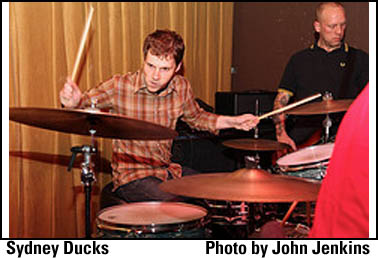 It was one of those fun times in San Francisco when there a few good shows in a row. This is actually not a rare thing, in that San Francisco does not ever seem to want for good shows, but still… it’s been a little while, I guess, since I went to three shows in three nights. Thursday was Sharp Objects at Parkside, and Friday brought Sydney Ducks (San Francisco), NorthernTowns (San Diego) and Young Offenders (San Francisco) at the Hemlock (http://www.hemlocktavern.com/).

Being unfamiliar with the Sydney Ducks (www.myspace.com/sydneyducks) prior to the show, I had a listen to them on the myspace. I was undecided when I listened to them, but, at minimum, really liked the guitar sound, and thought they sounded like a good band. Before I go on, though, a little history from our friends at Wikipedia:

“The Sydney Ducks was the name given to immigrants from Australia in San Francisco, during the mid-19th century. Because of the prevalent nativism in the United States at the time, along with the well-known Britishpenal colonies in Australia, these immigrants were stereotyped as criminals, and were blamed for phenomena such as an 1849 fire that devastated the heart of San Francisco, as well as the rampant crime in the city at the time.… The alleged criminality of the Sydney Ducks was the catalyst for the formation of the Committee of Vigilance of 1851. The vigilantes usurped political power in the city, conducted secret trials, lynchings, and deportations, which effectively decimated the Sydney Ducks.”

Anyway, the first thing that struck me about the Ducks, if I may refer to them as such, is that the singer acted in a way that seemed a little more aggressive than was warranted by the music, which is not terribly heavy. He sounds kind of like he has a mouthful of gravel, which I thought was in stark contrast to the clean guitar sound (the tone of which reminded me at times of “Boys Don’t Cry” era Cure). Speaking of guitar, one of the guitarists, poor devil, had a broken collarbone, so he played the whole show seated. Good on him for still playing. Ouch to a broken collar bone!

Getting back to the singer, though, at one point in the set, someone from the crowd yelled out, “Integrity!” This made me think of an ‘80s hardcore band. Then my brain started to wonder if the singer had actually previously been in a hardcore band (Integrity or otherwise), which to my mind would greatly explain his singing style. Unfortunately, I couldn’t pin down any connection. I poked around on the web a little, and asked Rock 'N' Roll Disgrace Records (Sydney Ducks releasing a tape with them soon), but couldn’t find anything concrete. Alas, I don’t know if my theory has any merit. 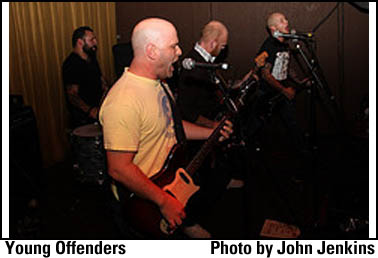 Throughout their set I decided that I did, in fact, quite like them. Once, at the beginning of a song, they sounded a bit like they were going to throw down some reggae, and at another point they really reminded me of Fugazi. I think they are interesting and I loved the drummer. Some of their choruses called to mind ‘80s New England Irish-American sing-a-long punk. The more I listen to them, the more I like them, and I may be getting a bit sweet on those choruses. I would definitely see them again and I hope they release some songs on vinyl.

Another reason I was wondering about a possible hardcore link is because it was pretty packed during Sydney Ducks’ set but then it emptied out a bit when they finished. You know how it is when people come to see a new band (although I don’t know how new the Ducks are) largely on the merits of one (or more) of the member’s old bands? That was my impression, but maybe I’m just totally out of it and the Ducks have some kind of righteous following.

Northern Towns (http://www.myspace.com/northerntowns) were up next and they had a really nice energy.  I felt, unfortunately, that some of that energy was wasted on the sparse crowd. Sometimes a good band seems a lot better when there is a crowd to dance and sing along with them. They did get into a bit of trouble when the singer made what seemed like a disparaging remark about the SF Giants (who the majority of the city has been insanely giddy about ever since the World Series), but I didn’t hold it against them, especially because they played a Wire cover (“Ex Lion Tamer”), automatically endearing them to me. They also played a Clash song. I felt at times they were a little Bananas-esque. They had some nice T-shirts for sale.

Young Offenders (http://www.myspace.com/youngoffendersmusic) headlined and started off with some comedy, saying, “It’s lukewarm to be here,” claiming that the lights were creating too much sheen (off their bald heads), and welcoming everyone to the San Francisco Tattoo Convention, which, seriously! It was tattoos a-blazin’ in there, over the top even for the Hemlock on a Friday night. I wonder if anyone has ever done a tattoo per capita survey…..

Anyway, I think the Young Offenders, a power pop punk band from the Marked Men camp, are super fun, and I always have a good time when I see them. Strangely, one of the songs that they played this time around reminded me a little of Drive Like Jehu. Listening to the myspace as I write this, I wonder if it may have been the singer’s voice and part of the guitar in the song “Black Hands” (although I have doubts about whether others would hear the comparison). Not sure, as I only have one record by them to date (split 12” with Giant Haystacks) and that song is not on there, so I was unfamiliar with it when I heard them play it on Friday. As usual, they played a good set, and I had a little dance. In the middle of their set, someone in the crowd yelled out:

“More tribal tattoos in the monitor!”

I think for a long time I will remember that and laugh.