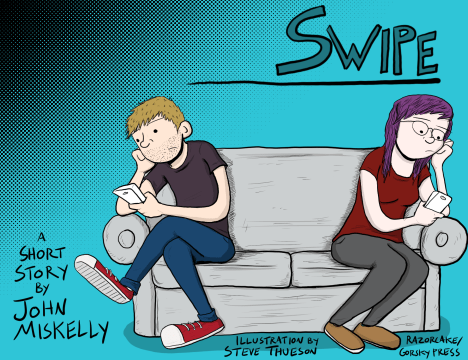 Dozens of girls, hundreds maybe, popping up on Craig’s mobile screen like targets at a carnival shooting gallery. Nature’s greatest miracle reduced to little more than digital carpet samples. From Alan Turing to the iPhone 6. From fighting fascists to rating chicks. Was there a better measure of man’s progress, of human ingenuity? A whole town’s worth of tail right there in your pocket to be idly judged while you take a dump or ride the bus or boil a kettle. What a time to be alive.

And so it was that Craig swept away another lazy Sunday morning. Left, left, left, right, left—always more lefts than rights—like that guy in the white gloves at Auschwitz; nonchalantly approving or condemning, sending girl after girl spinning away into the ether with the twitch of a digit.

Josef Mengele, that was his name, the guy in the white gloves, obsessed with twins apparently. Maybe it wasn’t quite as bad as Auschwitz—it definitely wasn’t as bad as Auschwitz. There was probably a better analogy than that that was escaping him. Oh well, ho hum; never mind, fuckin’ Sunday isn’t it?

He took a swig of lukewarm tea.

Mary was at the other end of the sofa, also on her phone. They were always on their phones. These days they seemed to exist only in each other’s peripheries.

What would a modern holocaust look like? There’d be iPads, and more admin. Excel spreadsheets full of the numbers of spectacles and shoes recovered from the victims. He’d seen photos of the piles of shoes in the brochure he’d picked up in the tourist office on a trip to Krakow. He hadn’t actually made it out to Auschwitz. It was a few miles out of town. You had to get a bus.

They could put each prisoner up to a public vote: swipe left; gas chambers, swipe right; hard labor. The first democratically run interactive genocide. He’d read somewhere about the psychological effect of witnessing an execution, about the creation of a feeling of mass complicity, a dark solidarity. In some countries they did them before football matches. He’d read it in a book he’d never finished.

It wasn’t cheating he’d decided, no more than noticing girls in pubs or clubs was cheating, the primordial split-second evaluations you couldn’t help doing on entering any given public space. Except they’d put themselves in the shop window, they wanted to be looked at and assessed and messaged. He’d only done the latter a couple of times and without intentions. After all, he had a girlfriend already, but you never knew who might be out there, did you? You never knew if the person you were with was a lesser version of a person you just hadn’t met yet.

And then there she was; Mary, smiling out at him from the screen, her presence in the room doubled—the real Mary, frowning, cross legged in sweat pants at the end of the couch—and the digital self-construct of Mary, all smiles and carefree abandon. It was a photo he himself had taken on a trip to Cornwall the summer before. It had rained a lot, and her hair was damp and sleek, her mascara was slightly smeared and she looked rugged and freer than usual, smiling against the elements, standing on a cliff edge with a black, cantankerous sea in the background. There were four more photos, two of which he’d also taken. She’d put an Instagram link in her bio. She’d never said she had an Instagram.

For a fleeting second or two he thought about saying something—ten thousand years of male entitlement manifesting itself in a hot spasm of indignation—before the absurdity of doing so dawned on him; to confront was to confess. This was a mutual betrayal and there was no moral high ground, no pulpit to preach from.

He looked up at her. Was she on it now? He looked at the movement of her thumb—hard to tell.

“What are you up to?” he said, keeping his voice as Sunday morningly innocuous as possible.

“Just a couple of emails,” Mary said, “how about you?”

“Facefeed. I mean Buzzfeed. Buzzfeed and Facebook. Just sort of doing the circuit, you know?”

She was definitely on there. Had she seen his profile? He’d kept his fairly minimal; only a couple of photos, just a line of bio with no attempt at jokes. If she hadn’t seen him yet would she say anything when she did? Probably not, for the same reasons he knew he wouldn’t; the awkwardness, the implications, the endless reams of gnawing subtext buried under flimsy validations like, “I just wanted to see what all the fuss was about,” or, “It’s part of the zeitgeist and isn’t it important to be informed?” How far had she gone? Beyond idle messaging?  He could lay it all out now. They could talk it through over a few beers completely honestly and sincerely like couples in relationships of this length were apparently supposed to.

But he already knew they wouldn’t. They’d bury it and learn to live with the festering smell. And in that moment he saw all the bodies piling up. Decades of comfortable compromise, of taciturn resignation, of dinner parties and drinks planned two weeks in advance with the same three or four other comfortable, compromised couples. He saw a wedding, a mortgage, a joint bank account, primary school catchment areas, weekend walks to National Trust “areas of outstanding natural beauty,” endless talk of house prices, the state of the railways and the weather, weekend trips to the in-laws, weekends that didn’t feel like weekends at all.

“What are you gawping at?” she said. “I’m making another cup of tea. Do you want one?”

John Miskelly is twenty-nine years old and lives in Bristol, England, in a room with a nice wicker chair but limited wardrobe space. Most recently he has been experimenting with noodle salads, BBC 6 Music and NPR, while waiting patiently for a new Tenement album to drop. He writes irregularly at www.protagonistcomplex.blogspot.com.

A collection of his short stories can be found on this website.