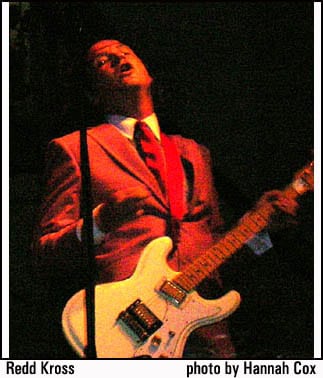 Just a few years ago, Sunset Junction was a somewhat different experience. There were about twice the number of gays in leather chaps and sailor hats. And less people from the >burbs. It’s kind of a drag that the bigger bands bring out all the people who would never even go to Sunset Junction unless those certain bands were playing. And as the fair grows each year, so does the donation and your chances of not being able to see the band you’ve been waiting all year to see. It was only a donation to get in, but now there is a mandatory charge unless you wanna stand there pettily bickering with the young Hispanic girl taking the money about how you supposedly live only like a block away and you’ve come every year for the last ten. It is nice, though, that the money goes to a youth charity and to pay off the headlining bands. In the past, Sunset Junction has brought out some of the most talented and popular bands. Just last year the New York fuckin’ Dolls even played.

This year, Sunset Junction was filled with all the typical L.A. types: the pseudo-bohemian youngsters in American Apparel and vintage, tattooed chicks, tons of bear-ish gay men who stay in their own clan, middle-aged intellectuals with black-rimmed specs, teenage boys who seem to think they’re Johnny Thunders with scarves and scars to show off, new and older generation of punk rockers, nondescript suburban middle aged women, and boys in sequined mini skirts. I saw a few B list celebrities among the crowd, too: Jeffree Star, the infamous myspace queen who has many, many still-in-the-closet fans, Long Duck Don (the weird Asian dude from 16 Candles), some of the Clit 45 boys, Stephen from the Magnetic Fields, and Donita Sparks of L7. 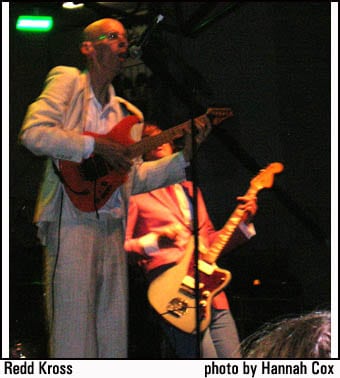 Redd Kross (spelled with 2 Ds and a K mind you) played Saturday night as the sun went down. They played a generally good set, filled with bubblegummy, sweet, and sarcastic tunes. For how old they are, they came off pretty dignified, even when playing songs twenty-plus years old. The line up was Jeff and Steven McDonald on guitar and bass and vocals, the Muffs’ drummer Roy McDonald (oddly, no relation to the other brothers), and Robert Heckler (barefoot) on guitar as well. The boys were dressed in hues of pink, black, and white with ties, button-ups and denim blue jeans. Many of their longtime older fans came out and paid their respects. I was looking forward to hearing “Look on Up at the Bottom,” a cover of the Carrie Nations, the Beyond the Valley of the Dolls onscreen band, but they never played it. For the most part, they stuck to their newer songs off the last album, Show World, which came out in 2004, and Phasesshifter from >93. The songs were still nice and poppy with camp and class, and a spin of heavy guitars for some psychedelia thrown into the mix (“Mess Around” and “It’s a Crazy World We Live In”). I was disappointed they didn’t play their more popular older shit. Not to talk crap on Redd Kross, but I think they’re a little in denial about their last few albums being as good as the older ones. Even today, Redd Kross still has a buzz among the younger kids because they definitely put their two cents into Los Angeles music culture. All in all, it was a very pleasant set and a good match for Sunset Junction, but not as much of a climax as I had expected. 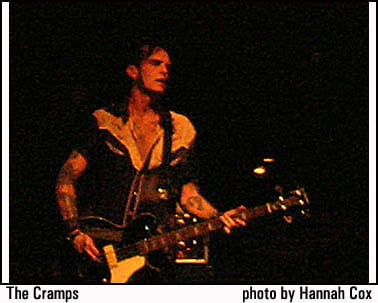 The Cramps went on last Sunday evening, and it was jam-packed with people. The crowd was restless and bitter because they couldn’t see well, and a few drunken punches were thrown. The Cramps, most definitely, lived up to my expectations. They played a nice, long set, with songs off every album they’ve done and a few covers, including a Love song which Lux dedicated to the great Arthur Lee who just recently passed. Lux put on a good show. He looked like a dirty, old wrinkly man in leather pants with bright white hair. Every few songs he took a swig or two of cheap wine and let it drip down his chin and chest, which looked great even though he and Ivy are totally health conscious and don’t drink or anything now, so you knew it was grape juice. And Ivy kept quiet and cool. She still looks hot. When they played “Let’s Get Fucked Up,” a girl standing next to me started puking on the ground, which I thought went quite well with the whole affair. And up front there was much pushing and shoving, with kids climbing on the lamp posts just to get a glimpse of Lux Interior. The Cramps’ garage, insomniac, twisted, trashy, surf, and sci fi sound fit right in with Sunset Boulevard.

This year, I ended up catching only two of the bands I wanted to see. I missed Very Be Careful and Black Rebel Motorcycle Club and some others, so maybe I didn’t get the best overall perspective on the musical performances at Sunset Junction, but I told you what I thought of what I did see. It is always a fun and exciting happening, and I am totally looking forward to next year. They better get some incredible bands.