The day before the show, my enthusiasm was rekindled by a younger friend of mine. “I don’t care how much it costs. I’m fucking seeing Sunn.” We both agreed that it was an experience that exceeded fiscal responsibility. We stood amongst his friends who offered their excuses, but this review isn’t about what those suckers did on August 11th, 2009. It’s about a loud show in a small room attended by people who crave extreme expression and like it when things get a little kooky.

The Eagle Rock Center for the Arts is an old building that was originally built as a library in 1914. From time to time, it houses shows of various natures, but always acts as a resource for the community, whether it is for an after-school art program, or as a lecture hall. The space is a cherished part of the north eastern Los Angeles area. 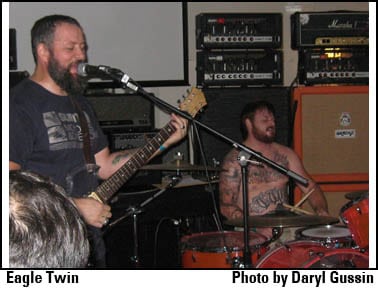 The first band to perform was Eagle Twin: a guitar and drum combo that was heavy and droney with a definite hard rock influence. Changing it up between slow, pounding, sluggish tempos and noisily crafted riffs, they did a great job of opening the show. At times they touched on the chaos that would ensue, but they stayed grounded in song structure and traditional musicianship. 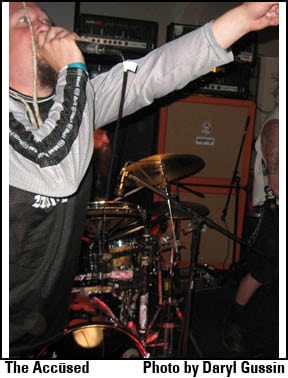 After Eagle Twin, The Accüsed took the stage. At first, I didn’t know how the crowd of devoted progressive metal fans would react to an old school punk band, then I found out that The Accüsed aren’t actually very punk at all. Playing straight-up crossover metal, they blasted through a set that roused some and gave others a great opportunity to hit the bar. And though their set felt out of place at the show, I’m sure everyone agrees that it was pretty cool when the lead singer did the fire spitting thing. They also gave the head-bangers in attendance their sole chance to mosh it up at the show. It was a chance they took and ran with.

Sunn 0))) is not a band I will pretend to be smart enough to fully comprehend. Though I enjoy the amount of thought that goes into it, and I think they’re really good at what they do, they make me feel the way that the Marked Men, Tragedy, or Dillinger Four do. They’re one step ahead of everyone else, and you just have to stand there in awe and appreciate it for what it is. The stage was littered with amps and heads. Outside on the street, an industrial size generator chugged away, fueling the towering electronics. Inside, a fog machine filled the room with periodic eruptions. The crowd was definitely getting tense. I scanned the room, baffled at the amount of people without ear plugs. Did they have any idea what they were in for? Or did they just not care? When three hooded figures—two guitarists and a third guy that does other sound stuff— finally took the stage, I knew that the gates to hell would soon be opened.

They opened with five to ten minutes of harsh, heavy noise. They turned air into a wall that repeatedly slammed you in the face at the speed of sound. They mimicked the sound of airplanes slowly colliding into each other, mountains being torn in half, the moon burrowing itself into the Earth’s core. It’s the sound of destruction and devastation, and it’s so damn glorious to listen to. It puts a big ole stupid smile on my face.

Then the fourth robed figure came out and the cryptic, pseudo-mysticism stuff began. It was still cool, but it can get really cheesy at times. For the remainder of the show, he would vary between chanting, screaming, singing, moaning, and various other creepy oratory noises while the other members continued to crumble the air with cacophony. He did his fair share of ritualistic hand motions and even changed costumes half way through.

Sunn put on one hell of a performance. At times, parts seemed a little dragged out and got a little stale, but they also reached such extreme levels of intensity. It was not uncommon for people to leave the room due to the physical and mental impact that Sunn’s set had on them. If you are at all interested in experiencing brutal, chaotic noise at its fullest potential, do not pass up an opportunity to see this band.

PHOENIX FOUNDATION, THE / HER SPECTACLES: Split: 7″