Sometime last year I’d intended to check out this band Strip Mall Seizures (http://www.stripmallseizures.com/) (pretty funny website, by the way) when they played in the EastBay, but for some reason I hadn’t made it to the show. Last Sunday, though, they were playing at Hemlock (http://www.hemlocktavern.com/), so I headed out. Why not end my holiday break with a (potentially) good show, right? At the end of the night I was glad I’d gone because it was really enjoyable – three interesting bands and good company = fun time!

It wasn’t very crowded, which I liked. The area where the bands play is a pretty small space, really, and can be stupid when there’s a bunch of people crammed in there like the oft-referenced sardines.

I liked Strip Mall Seizures, from the Bay area, right away. I’m not exactly sure what kind of musical genre one might try to lump them into (although I understand from their myspace page that they’re “Magically Diasporic Cyber Nothing Punk”), but I thought they were pretty crazy, chaotic, spastic punk. Their singer totally kicked ass – at one point at the beginning of one of their songs, she ran through this frantic build up of vocals that reminded me of HR or Jello, but with a deep female voice à la PJ Harvey or Carla from the Geraldine Fibbers. Really liked her style. Later in the night in one song she sang prettier and sounded to me like some older (‘40s, ‘50s) chanteuse singing a hula song. Weird! I was into it. I loved her confident delivery. In one song she told us all that she was about to “have a human moment!” whether that’s good or bad I’m not sure, but I was pretty happy about it!

Aside from the singer, the band was made up of a drummer, guitarist, bassist, and keyboardist. Most of the time the tunes were kinda fast and energetic but there were some slower, heavier moments as well. The keyboard occasionally verged into circus-style rhythms but not too much for me to not like it or, to find it to be too kitschy. At one point after they’d started, this (apparently tardy) girl ran into the space, hurriedly threw down her jacket, and then hastily made her way to the front to join the twenty or so kids that were already there dancing to the band. I loved that! Nice to see that type of obvious proof that people are excited about and supportive of local bands. 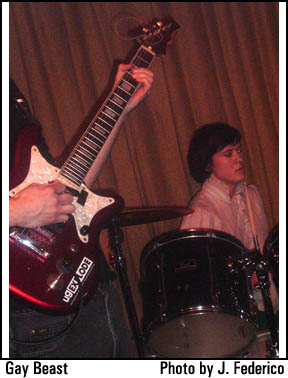 Strip Mall Seizures had a tape for sale but I didn’t pick one up, which I now regret. Will try to get one for myself via mailorder or possibly the next time I go see them play. Really liked them.
Gay Beast (http://www.gaybeast.net/) from Minneapolis were up next. For some reason, I quite like that name. Gay Beast! Indeed. They’re a three-piece singer/keyboardist/saxophonist, guitarist, and drummer. I thought they were pretty good but I couldn’t decide if I liked them or not. The music was interesting and they had a zillion change ups, which I usually like, but which were, for some reason, a little much for me this time around. That may have been because I didn’t know the songs, though. With familiarity, breeds rocking-out-ness. Know what I mean? There was, again, some spasticness but it seemed to me more new wave and less punk than Strip Mall. In the first song, the singer reminded me of some kind of flattish Gary Numan / Devo protégé. In the next song, he held onto the ends of some words in a way that reminded me of Björk. The guitar sound occasionally ventured into a These Arms Are Snakes style that I liked. When the saxophone came out, it got kinda arty and they also ranged into an old-style Blood Brothers manner that was nice. However, halfway into their set I decided that, despite their interesting tunes, ultimately, I wasn’t that into them and I probably wouldn’t listen to them at home. As soon as I decided that, though, they played an instrumental that I really liked. So who knows?! One thing I definitely liked though was when the singer said: 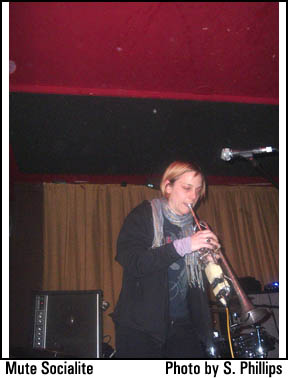 Last up was Mute Socialite (www.myspace.com/mutesocialite), a five piece from Oakland, as well as a radical and not unwelcome concept (a socialite being mute that is). They had two drummers, which automatically endeared them to me. Aside from dark chocolate with marzipan and a few other things, two drummers are definitely a good way to work oneself directly into my heart. The guitarist also sang, the woman playing trumpet also sang, and one of the drummers also played guitar sometimes. Also in attendance was a bassist.
Right away, the trumpet sound reminded me of this excellent song by Dog Faced Hermans that I totally love, and the trumpeter’s singing actually occasionally reminded me of the singer from Dog Faced when she would hit the higher notes, but then she also did some real screaming. I loved when the singers sang together in a kind of yelly, folk punk style. The second song they played was by some funk guy, and it was really funky, but in a more experimental kind of way. The songs were kind of long and, occasionally, my mind did wander a bit, but, overall, I quite liked them and should probably pick up a recording. There was some fancy guitar work and the drummers were very busy. One of their songs in particular I was really into – it had a great big-hearted beat and scary Wizard of Oz vocals. Another brought out a xylophone that sounded beautiful. I really liked their apparent ability to mix it up and add relatively underused instruments into their repertoire. At one point, one of the drummers used what looked, (but was probably not) for all purposes, like a stack of stapled-together strips of card stock. He didn’t (I don’t think, but may have missed this) hit the drums with them, but rather just shook them beside the mic where they made a cool, floppy paper kind of sound. Yay floppy paper! Thank you, Mute Socialite. Recycling at its very best!

ALL THROUGH A LIFE: Self-titled: 7” EP