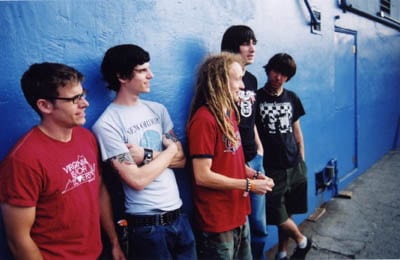 Strike Anywhere: The Evolution of Punk Rock Angst: An Interview by Greg Barbera

Thomas Barnett, the 30-year-old, dreadlocked lead singer of Richmond, VA's Strike Anywhere immediately comes across as polite, apologizing for a botched phone interview, and offers an alternative time to reschedule it in the blink of an eye.

He's expressing a humility rarely found with musicians of today. And like most kids who have spent their entire lives living in and around a punk rock community, he's eager to speak because he wants to share his love of music, educate the oppressed, and fulfill the ideologies he's learned through his alternative lifestyle.

At fifteen, Barnett was booking shows at a Reconstruction-era, two-story granary on the outskirts of Richmond. By 1991, he was fronting punk stalwarts Inquisition. When Inquisition broke up, its members went on to form Ann Beretta and River City High. Barnettt wasn't as quick to jump to another outfit, but by the fall of '99, Strike Anywhere had formed.

"Something about it spoke to me immediately," says Darren Walters, co-owner of the Delaware-based Jade Tree Records, the label that the band calls home. "I was 30, and it sounded like the kind of hardcore that was missing in today's environment. It hit me instantly and left me wanting more. It was derivative of everything I loved about punk, but yet sounded fresh at the same time."

And the band's newest release, Exit English, delivers exactly what Walters says. Exit English offers a fresh take on melodic hardcore and anarcho-punk, yet the common thread of punk rock's various ideologies weaves through it, making the record both nihilistic yet endearing. Not since Youth Of Today have I felt so positive about feeling angry, so good about fighting the man.

Greg: It seems like there's some sort of incestuous thing going on with the Richmond scene where almost everybody has worked or played with one another in some shape or form.
Thomas: Yeah, it's always been everyone helping each other out. That's been the Richmond ethic for as long as I've been involved in it. In high school I was setting up shows at this old barn - a Reconstruction-era two-story granary - on the outskirts of Richmond. And guitarist/singer Matt Sherwood has toured and traveled and worked with bands like Avail. He's been on all ends of the DIY music community.
Greg: Why do you think that Richmond has that sort of tight-knit scene as opposed to other cities which tend to be divided by genres?
Thomas: I think Richmond might be just big enough and at the same time just small enough that there's a balance. Everyone still wants to have parties together. It's a cheap place to live, a cheap place to try to go to college, drop out and still live there [laughs]. That makes a punk scene vital. There's a lot of punk inspiration, as far as what it means, that comes from Richmond and it contributes to the body of punk culture.
Greg: Would you say there is a connection between your locale and activism?
Thomas: Richmond's activist culture really weaves through the punk rock community. But punks can be just as lazy and accept the worst; they can become lazy sloganeering cheerleaders without any sense of irony. There needs to be something almost sound-bite worthy or a graphic that has shock value to it. The deeper values and ideals of rebellion experienced through family life or choked out of culture add a sense of suffocation. That's what drew all of us into this music.

Then you can take it to a larger level with society and people who are really suffering and what values the American Dream talks about and who it's built on and who is still suffering and what that means to you as a person. Those connections are pretty easy to make in Richmond. It's not an academic activist scene. It's a very visceral scene. You see segregated neighborhoods. Poor African-American and poor white communities cut off from bus lines, cut off from ways to even get to jobs. The education that goes from almost Third World to elitist Southern aristocratic class-as-culture, which is even more ridiculous than the way that the upper class manifests itself in other parts of the eastern seaboard.
Greg: In the past year, I've done some work for a private investigator who is hired by the public defender's office to dig up mitigating circumstances for persons facing capital murder charges. For instance, say a group of black men break into a house and one of them has a gun and kills somebody. The whole group can now be tried under the felony murder law. Yet few involved had any idea about the gun or the gunman's intentions nor were they educated enough to know the consequences of their actions. It's like sex education. I believe you need to be teaching that in school along with basic civics classes, too. Things like: "If your friend has a gun and shoots someone to death and you are with him, you could go to jail for the rest of your life or be put on death row to be executed." I'm a middle-class white guy with a college education and nobody ever told me about genital warts or felony murder until it could have been too late.
Thomas: Totally. It's like during the Civil War when both the Union and Confederate armies burned Richmond. All the people knew was the town across the way was burned by some people from the Union army. So they're like "Fuck that, those guys just killed my cousin." That's exactly what's happening in poor, urban communities with the level of crime that occurs. It's crime based on illiteracy.

In Richmond, there's so much ruin and decay right along the river; right along where the slave auction blocks were, these haunting reminders of this incredible history that public school education doesn't cover very well. But you can see it. It's like, "There was so much more to learn, why wasn't I taught this?" There's so many things that I can find sympathy and solidarity with. Every one of us needs a greater truth. Every one of us knows it's emotional before it's even academic; some things we weren't even taught.
Greg: Is it difficult to write socially charged music yet still have it be about dancing and singing along?
Thomas: We don't entertain thoughts of being on any of the pedestals, or conceits that we're all scholars, or that we even have a party line. It's more like the folk tradition where we have stories in our songs from personal experience. We see this and we can filter it through our social consciousness, our sense of outrage, our sense of disconnection in American society and wanting to make a connection. The only way you do that is through putting your arm around your friend and singing along. Or stage diving.
Greg: So you're not really involved in local politics, per se, or having any political affiliation. Rather, you're just documenting what you see.
Thomas: We do, on occasion, play a benefit show or even as individuals work with a coalition for the living wage through Food Not Bombs. Our friends are activists and these are the people that we write songs about and inspire us. So we are involved, although not very often.
Greg: Punk rock has become much more homogenized over the years.
Thomas: Yeah. People are making money off of its look and the most superficial elements of punk. Every 7 or 8 years some A&R guy from some major label decides he's discovered punk... again. It's laughable, but that doesn't mean anything to everyone in the cities, to the kids. And you and me, in our 30s, being kids as well. The "kids" being part of our vernacular that doesn't actually have to do with physical youth but with mental youth. We are not apolitical; we definitely have social viewpoints and we are connected with activism in different ways. But we're not leaders. We don't have instant leadership cards. We just happen to be musicians and songwriters and that's our humble contribution.
Greg: Do you consider yourself patriotic?
Thomas: No. Of course not. I'm probably more patriotic toward Richmond. I don't hate America in a ham-fisted way. I definitely see the positives. But it's a nation and national identity is such a horrible thing to buy into.
Greg: Being that Strike Anywhere has toured in other countries, I'm sure you have gotten feedback from fans and bands abroad. What's their perspective on what the United States means or represents?
Thomas: It's such a big monster to so many people, but there's some great traditions and some good things that are still alive in the U.S. like dissent and protest. Yet these are becoming luxuries that our leaders cannot afford us anymore. We're seeing exactly just how much control can be exercised. And how flagrantly people can abuse civil rights and rights of speech and just that the cultural conditions are being manipulated against the people. A lot of people aren't going to want to accept this, they think it's hysterical and some ridiculous left wing banter. Yet in other countries it's something quickly taken away.
Greg: What do you think is the biggest hurdle this country has to overcome?
Thomas: I could tell you what I think the best parts of America are: I think the civil rights movement was incredible and had a very American quality to it. The way it brought together ideas of non-violence, earthy religious overtones and things like the Highlander folk schools where people were taught how to bring ideas of freedom to people who didn't know how to read yet, how to mobilize people for voting and be supportive of grassroots democracy. People having education stolen from them in the poor working class is probably the biggest hurdle. Our educational systems, for the most part, are inconsistent and poorly orchestrated. 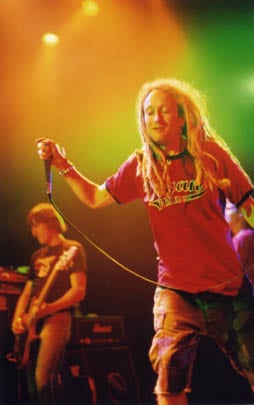 The disintegration of the family would be another big hurdle.

So Fugazi came down and played this reggae club and then I went up to D.C. to see Fugazi a lot and every show was a Positive Force benefit and they played with bands like Fidelity Jones. It was awesome. That segued into the more hardcore scene like Worlds Collide or Four Walls Falling and a lot of that was just as meaningful because it was really political. It was straight edge and the sub-cultural kids that went to the shows were different than say, the conscious Dischord punks, and it was nuts to melt, like, straight edge as a lifestyle and let's-beat-some-people-up with other issues like compassion.
Greg: It's kind of weird how straight edge became like a bad jock fraternity beating people up who were smoking at the shows or wearing leather when punk rock was born out of a bunch of boozed-up derelicts tired of bad FM radio. When I got into punk rock it was mostly displaced goth girls and old bald guys tossed together with divorced latch key kids from suburbia. Everybody was a freak and there was some solidarity in that we were all freaks.
Thomas: And that's the same thing from the beginning of this conversation. There's just not enough to have that much separation in Richmond. It was just too ridiculous to not have shows where the nihilistic drunk punks would play alongside the straight edge kids. Our band is made up of drunk punks and hardcore kids [laughs]. We are definitely a product of Richmond where we would be at the same shows together and have the same musical tastes. I love Turning Point, Judge, and Gorilla Biscuits as much as I like the Subhumans and Conflict and Flipper and D.I. We have a lot of shared tastes but our lifestyle choices have been based on some of the differences in the shared taste.