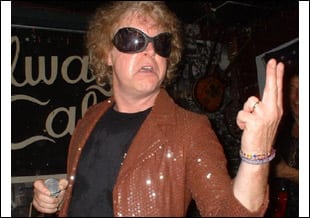 Stiv's Drinking Buddy: An Interview with Mach 5 By Brian

Once upon a time, in the far distant past, you didn't hear words like "punk" or "hardcore." It was a time where you were just beginning to hear the words "heavy metal." And even when there were recognizable stylistic differences between bands, that didn't mean they couldn't be on the same bill together. A glittery hard rock band could play a place like the Rat in Boston's Kenmore Square on the same night as a bunch of snotty young kids from the Midwest, recently transplanted to New York City, and the audience could sincerely enjoy them both. Not only that, but the lead singers from these two bands, coming from very different musical directions, could strike up a friendship that would last a lifetime - even if one of them didn't live all that much longer. The two singers in question were Mach Bell (with Thundertrain) and Stiv Bators (you know who he sang for, I hope). One of the great tragedies of the current state of rock music is that you almost never see this kind of diversity on a single stage any more. Of course, there've never been too many singers with as much stage presence and charisma as either Mach or Stiv.

Nowadays, Mach Bell is the front man of a new band, the Mach 5. They started as a bit of a lark, playing the fiftieth birthday party for Miss Lynn, publisher of The Boston Groupie News, one of the oldest zines in the country. Miss Lynn started BGN in 1975, and one of the first bands she covered was Thundertrain. When she was planning her big birthday bash, Mach was one of the first people she thought of, and she was instrumental in hooking him up with drummer Jimmy Birmingham and bassist Carl Bianucci, both veterans of the Boston rock scene. Mach brought along his old friend Jeff Thomas, a bassist by trade, but a more than capable guitarist for a one off like this. They performed a bunch of covers, along with a couple of Thundertrain songs, and were very well received by the audience. One thing was for sure: Mach Bell still had it.

After a break of a couple of years from performing, Bell was ready to dive back in, and Mach 5 seemed like the perfect vehicle. The four original members started rehearsing together, but for one reason or another Jeff Thomas stepped out. This was just the opportunity Dee Stroy had been waiting for ever since Miss Lynn's birthday bash. Stroy and his band Sugabomb had also played that night; and as he stood in the audience watching Mach 5, he thought to himself: "I've got to play with these guys." He fit in immediately, providing the perfect manic balance to Bell, while Bianucci and Birmingham laid down the solid foundation. It wasn't long, however, before Bianucci quit, citing the ever popular "creative differences." Once again, however, Bell wasted no time finding a replacement. Jeff Thomas was thrilled at the opportunity to jump back in, now on his true instrument, the bass guitar.

After that, things started to move pretty fast. Writing songs, playing as many shows as possible, trying to reestablish old connections and forge new ones. Bell took advantage of his old association with Gulcher Records to get his new band signed, but once Gulcher heard the recordings they started making creative suggestions that Bell and the rest of the band were uncomfortable with. Enter Dee Stroy's long-time friend and independent label owner Eric Law, who offered to put the record out on his Lawless Records. The result is the sort of record that, like those Thundertrain/Dead Boys double bills at the Rat, defies categorization. The only thing that's for sure is that it's rock'n'roll, right in the same long tradition that started with Eddie Cochrane, Little Richard, and Chuck Berry; and passed through the Sonics, Thin Lizzy and AC/DC on it's way to the Ramones, the Real Kids, and, yes, the Dead Boys.

What follows is the result of several conversations before and after Mach 5 performances in and around Boston, plus one sit-down conversation in my favorite coffee shop, Kiskadee, in downtown Plymouth, Massachusetts, America's Fucking Hometown (I swear, that's what it says on the Chamber of Commerce signs). 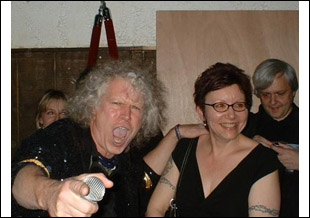 Brian: I think Kenne Highland is one of the most interesting characters to come from the Boston scene. Did you know him back in the day? I know he was married to Miss Lynn, and that you and she are friends from way back.
Mach: Yeah, Brian! Miss Lyn of the Boston Groupie News and I both grew up in Holliston, a little town west of Boston. We hung out together all the time. In '76 I read about "Muffdiving in Wilkie South" by the Gizmos in Cream Magazine. I ordered the single mailorder from Gulcher Records out of Bloomington, Indiana. That was the first time I heard the great Kenne Highland sing. In 1977 I was startled to see Kenne himself standing on my doorstep - with my sweet Miss Lyn in tow! Things got weirder. Kenne joined the US Marine Corps; he released his unforgettable debut Afrika Korps LP; Kenne and Miss Lyn got married. Thundertrain and the Afrika Korps played Cantone's for Mr. and Mrs. Highland's wedding reception (Afrika Korps Live at Cantone's 1977). The marriage didn't last, but my friendship with Kenne did. Highland kindly invited me onstage to join him at numerous Vatican Sex Kitten shows prior to the launch of Mach 5. Seems Kenne has dropped out of sight for now but we all hope to see him rocking Boston again real soon.

The following is a conversation I had with Mach 5 drummer, Jimmy Birmingham:

Brian: I know you spent some time playing in the Real Kids and with Felice in another band. How did that first come about?
Jimmy: I was hanging at Axis back in 1993 and saw the Real Kids play a "Spit Reunion" night. I told Felice after they played I was a fan of the Real Kids and he said that he had a new project called the Devotions and that I would be perfect for the band. I left after one week and one show because of the "stuff" that he and Billy Cole were doing. I also was starting a business and didn't need the extra aggravation. Fast forward to 2002, when I ran into John at the Abbey. I was there to meet with a new band that needed a drummer. I was at the bar with these new guys and knew they weren't for me. I saw John and he was extremely nice to me. He said that the Real Kids just fired their drummer and they had some shows next week and was wondering if I would join to play them. "No problem," I said. "Where are the shows?" Detroit and Chicago. So I joined the Real Kids, and let's just say it was a total roller coaster ride. I did three small tours with them, across the Midwest and the South, played New York City about fifteen times, played with some great bands like the Dictators and met some amazing people. Being in the Real Kids got my name back out there in the music circuit. It also got me a drum endorsement and I'm in a great music documentary. I owe a lot to Felice and the Real Kids. If it wasn't for the Real Kids, Mach Bell would have never saw me.
Brian: Compare working with Felice to working with Mach Bell.
Jimmy: Where do I start? John Felice is one of the best, most naturally gifted songwriters ever! The classic songs are timeless. Unfortunately John has a monkey on his back that he couldn't seem to shake after three decades. It's so sad because that band could have been bigger than most of the bands that got famous in that punk/garage era of the late '70s and early '80s. John never pushed anything hard enough, he just quit when things started to get tough. I love Felice when he is Felice - he would give you the shirt off his back. But when the other Felice came out, watch out! Mach Bell is the singer that I always wanted to play with. I knew that he grew up with music similar to my style. Hard rock on the metal/punk edge. I was never a good fit for the Real Kids - as I say, they wanted Tommy Ramone and got Tommy Lee! I played too hard, too loud and I was a showman. Felice hated that! I was everything that Mach Bell wanted and needed. Mach is such a straight ahead guy, too. I can make suggestions and he listens; if it works, we change it. I had no input in the Real Kids. Mach's energy level is crazy, too. That guy can go for hours up on a stage, with the energy of a twenty-one-year-old. This band is one of the best, most fun bands I have ever been in, and at forty, being happy playing is key. 'Cause we all know it's a great hobby, not a job. 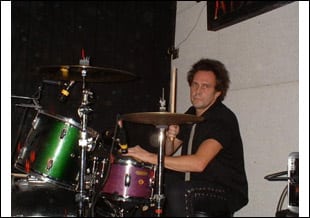