San Francisco’s Potrero Hill District is a strange part of town. Just east of the Mission its sparse placement of restaurants and bars keeps scenesters from shuffling about within its streets and its proximity from the SOMA renders it a perpetual warehouse lot for the suits downtown. Amongst the empty streets and barren sidewalks stands a bright red one-story known as Thee Parkside. Though undoubtedly a dive in the truest sense of the word the venue has still hosted a number of classic punk bands ranging from TSOL to NOFX to the Cro-Mags, turning their cramped little space into a human sea of shouting, shoving, and shameless rock’n’roll. It’s one of those places were well established acts can bank on a packed house and up and comers can test the waters. The show that night was a little bit of both, mixing the sounds of a few different groups you may not expect on the same bill, but nonetheless all managing to pull off a collectively solid performance.

Starting the evening off was The Complaints. Out of all the bands that played that night they were one I was the most unfamiliar with. After their first song some people in the audience started throwing their beer cups at them onstage. I’m assuming they all knew each other because the lead singer just laughed about it and the audience members starting throwing up “rock on” hand signs like nothing happened, but still, it was a weird moment for everybody else. For the most part I’d file these guys under the power-pop catalog, with tinges of The Mr. T Experience’s Dr. Frank in the vocal department. A majority of the songs utilized sing-a-long group vocals for the chorus that, while fun for the first few, began to dry the well by the end of the set. Tight musicianship and a consistent delivery are probably the best things going on here and for an opening band they did their job well enough. 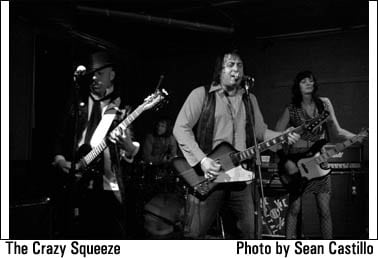 Next up was The Crazy Squeeze. This band is a side-project from Stitches guitarist Johnny Whitmer and I can understand why he’d work within another group for these songs; their style is much more in the vein of early Clash and Damned records and I’d even go as far as to say they take a few hints from the Jam’s In the City. Whitmer shares vocal duties with fellow guitarist Frankie Delmane and the two make a good combination, trading off between denser annunciations and the latter’s more nasally, uplifting approach. As they made their way through their first three songs the power went out right as they began their next. After cranking each knob back and forth and mixing and matching every cable within reach they were back in business and continued their own brand of classic first-wave punk with songs like “C’mon And Dance” and “With A Girl Like That.” Also worth mentioning is their drummer Johnny Sleeper who, donning full muttonchops and dressed in a multilayered mod-inspired outfit, was busting his ass and sweating it out like a crazy man behind his kit. 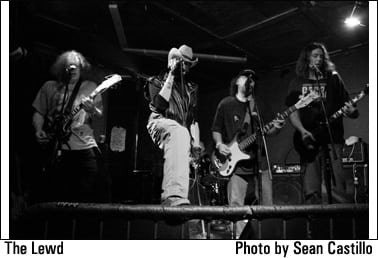 The Lewd, one of the West Coast’s earliest hardcore proprietors was next, and as soon as they started playing the room was filled with a whole different kind of energy. Over 30 years after they formed The Lewd can still rock with just as much of a go-screw-yourself attitude as they did when they started, but for a band that had its first show opening for The Ramones could you really expect any less? Consisting of original vocalist and guitarist, J Sats Beret and Bob Clic, and filled out by a few other vets of the Bay Area scene—including Clic’s very own son—this current incarnation definitely manages lives up to the band’s long standing reputation. While it’s easy for a number of groups to “re-form” with a completely different line-up, often to the dismay of their most loyal fans and inevitably losing their essence all together, it’s nice to come across one that actually plays with respect to its history rather than butchering it. I once had the guitarist of a quite popular folk duo once tell me, “Sorry, we don’t play that live,” when I requested one of my favorite songs from their catalog. Thankfully The Lewd doesn’t pull that crap and their set list included some of their signature songs including “American Wino,” “Kill Yourself,” and “I’m Not Pretty,” plus a few of their lesser known tracks like “Cockroach” and “Heavy Metal Party.” It was a refreshing shift from the more pop sound of the evening and a great lead into the headliner. 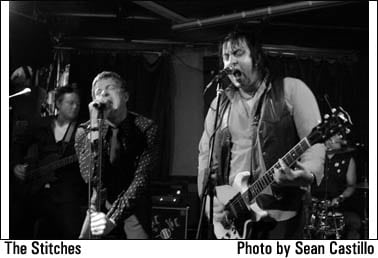 If you looked at the first two bands as channeling a first-wave punk feel and The Lewd bringing a classic hardcore vibe, then The Stitches were the modern incarnation of both those idiosyncrasies. Walking on stage they setup their gear and stood ever ready at their positions but stayed laidback enough to show you they obviously know what’s about to happen next; an uncontrollable blast of raw sonic assault that emits from the speakers and proceeds to nearly melt your face off.

The crowd suddenly morphed into a flash flood of bodies violently crashing into each other, a sight that came unexpected on my end seeing as how they’d been fairly quiet all night. I no sooner had to understand than to witness frontman Mike Lohrman bouncing around like a wild man, taking hold of the mic and stage as if the life of every person in attendance depended on it. Highlights included “I Don’t Know,” “My Baby Hates Me,” and “Automatic,” but in truth they played every song with the malicious intent to shatter your eardrums.

Overall it was a good mix of bands, and I’m hesitant to say they were going for a “retro night” in terms of musical styles but a couple of the groups definitely drew upon some early influences. As the final set finished, the crowd dispersed, and the lights powered down I stood in front of Thee Parkside staring at the dimly lit sidewalks and parked cars. The next day people would be walking their dogs and taking their children to the nearby playground completely oblivious to the pandemonium that just occurred, but I guess that’s what makes it that much more satisfying of an evening.