Far be it from me to give Jake Burns advice, but hey, having Throw Rag as your opener is just a really, really bad idea if you’re an aging punk band looking to make an impression.

Stiff Little Fingers, whose members have slowly fallen away over the years like dry leaves from a dead tree, continue to soldier on valiantly with ex-Jam bassist Bruce Foxton and a revolving roster of backing musicians.

They’ve still got the energy to render classics like “Alternative Ulster,” “Tin Soldier” and “Fly the Flag,” with enthusiasm but I probably speak for a lot of longtime fans when I say their 1981 album Now Then saw the band voluntarily cut off their previously militant balls in favor of more sensitive material, beginning a long, painful slide into irrelevance, then disintegration. Burns maintains it was their best album ever but it wasn’t until they regrouped in 1988 – returning to form with the meaty Flags & Emblems a couple years later – that fans could earnestly and righteously shake their fists in the air again.

So when they came to San Diego’s Brick by Brick on August 9, it was with guarded optimism that many fans heralded their return. While their show at the Casbah last year had sold out and was met with positive reviews, those who weren’t there were still waiting to be convinced.

Opening the show was the regurgitated oi-by-numbers band the God Awfuls, who performed competently but didn’t leave much of an impression. That job would be left to Throw Rag, one of the funniest, hardest-working touring bands of the last five years. 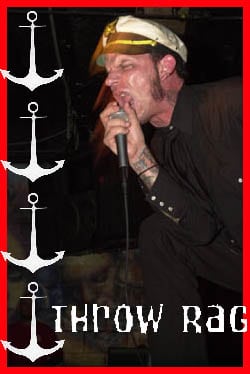 Hailing from the hot, dried-out desert wasteland of the Salton Sea, Throw Rag has made a name for themselves largely – and perhaps more to the point, ironically – as a support band for the likes of the Supersuckers, Gaza Strippers, Zeke and other grimy, balls-out punk bands for thirty- and forty-somethings. The sad thing is that as the more established bands slip and slide with age, these desert-dwelling sailors remain an also ran.

Lead singer Captain Sean-Doe is well-schooled in the antics of Leonard Graves Phillips. Hilarious, but no less rocking numbers like “Space Hump Me” and “Hang Up” recall the Dickies at their outrageous best with washboard impresario Action Craig Jackman supplying the band’s grossest gross-out moments. The spoons he plays with, when they’re not hitting the washboard, can be found in any of Jackman’s individual crevices, filling up with various bodily fluids which he playfully flicks on those unfortunate enough to be standing too close.

So how in the hell does a relatively serious band follow that? Whatever their past or present shortcomings, Stiff Little Fingers came out swinging, dutifully hauling out all the classics along with a few genuinely inspired moments.

Watching past heroes can be hard once a band has slipped into relative obsolescence. Twenty-six years after hitting the scene as Belfast’s closest approximation of the Clash (but not before playing REO Speedwagon songs as a cover band), SLF has gone through a lot of changes. Drummer Jim Reilly was the first to leave, joining the Red Rockers in 1981 and was replaced by Dolphin Taylor of the Tom Robinson Band (who, in turn, left in the early ’90s to be replaced by a string of different drummers); Ali McMordie left after SLF’s 1989 reunion tour to be replaced by ex-Jam bassist Bruce Foxton; and rhythm guitarist/vocalist Henry Cluney left after the band’s return to form, 1991’s Flags & Emblems. So go ahead and call them The Jake Burns Band. It’s not far off the mark. 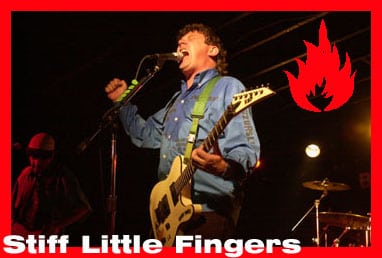 Burns’ passion, however, is the band’s saving grace. He still rants coherently about the situation in Northern Ireland, even if his only contribution is in doling out heaping gobs of contempt for anyone daring to have an opinion on the situation.

“No one understands what’s going on over there, I don’t care who you are,” Burns raved, introducing the non-partisan song “Each Dollar a Bullet.” “Not you, or you or you or even me. And I lived there!”

Like a lot of bands of the last two years, Burns paid tribute to the late, great Joe Strummer. Dedicating “Strummerville” to the man who was his most obvious influence, Burns said that had it not been for the Clash, SLF would never have found their voice. It was a commendable addition to a show that was fiery in demeanor but unsurprising in content. Classics like “Roots, Radicals, Rockers and Reggae,” “Barbed Wire Love,” “Alternative Ulster,” “Tin Soldiers,” “Nobody’s Heroes,” and “Suspect Device” still sound timely, dated for only those of us who’ve followed their career for twenty-five years.