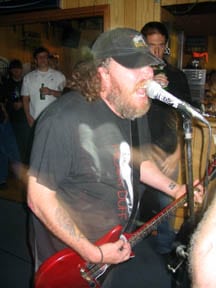 "That was 53 minutes," and that is how the show ended, followed by some AC/DC song played by some DJ who was probably trying to get laid (at least, I know that's what I would be doing if I were a DJ). But fuckall, the one show I seen of the Spring Break McTurtle tour was a bitchin' awesome good time.

First off, I'm not sure who is reading this, so I am going to talk to you like you don't know shit. When bands tour, most of their miles are spent sitting in a fucking van. Tiltwheel, the Dukes, and Altaira all played in Chico, CA (Frat boy, USA) the night before they played San Francisco. And the night before Fratboysville, the girls all played Portland, OR. Put the three of those towns together and you would think you gots tons of pussy, pizza, and beer under your belt, but I think all they ended up with was hangovers, inflated gas prices, and asses, except for Boyband, the bass player of Tiltwheel, who got "BITCH" spray-painted across his chest when he passed out in Chico. Long story short, the miles that led to San Francisco appeared to be in vain.

The bands arrived at the Red Devil Lounge around six o'clock in the evening and the confusion began. Turns out the show was a last minute addition to three other bands that were on the bill for that night. The guy who set up the show told Davey Tiltwheel that if one of the bands cancelled, the three bands would have an hour to play. But if all three local bands (not worth mentioning) played, the three touring bands would only have a half hour to play. After a team vote, the Spring Break McTurtle tour set its sights on playing three-song rallies and hopefully selling two t-shirts. Everyone pretty much looked on the bright side and decided even if they didn't play, everyone got to sit around and drink until midnight, except for Phil, the drummer for the Dukes, who was extremely disappointed to discover that no liquor stores carried Thunderbird.

Nevertheless, the vans were parked and beers were drunk. Everyone was feeling most triumphant. Before I knew it, I had about six Sparks in my system (something I don't recommend) and the last band (Strychnine) was finishing early with a cover of Turbonegro's "Apocalypse Dudes." Titlwheel started setting up and everything almost started to fall into place. 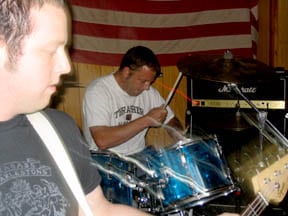 A few chords began blazing and the crowd started shouting, "Why am I so depressed?" Arms crossed over strangers necks and fists were thrown in the sky. It was about this time I cracked my seventh Sparks, which I deviously stashed in my pocket and opened her up just in time for the second song. This is when I discovered that Tiltwheel had squirted out a new song. This threw the crowd into a "hey what is this?" kind of dance maneuver. But by the end of the set the crowd was happy and the floor was sticky. And next up were the Dukes.

When the Dukes of Hillsborough took the stage, most drinks were empty. But the Dukes started off with a bang like Oklahoma City and brought the rock like Alcatraz. It was the first time I heard the Dukes and I was pretty impressed. They played "Black Watch" from their Undefeated at Russian Roulette album. This is now my favorite song by these boys. It's a pretty badass jam like strawberry jelly. Next they played one of their songs from a split release with Altaira. The Dukes definitely got a lot of that Florida sound to them and some melody that makes you want to take your shirt off and hug a fat guy.

When Altaira took the stage, everybody was fucked up. This is a fact. Altaira was up and I have seen them a few times before, but I've got to say that this time, they brought the suck. I don't know what happened but the guitar dude, Silly Billy, was lost or in jail or something and made it onto the stage about three chords after the song started. Then the boys seemed confused about what song they were playing. By their second song they almost had their shit together and it sounded pretty neat-o. But then they started yelling for Davey Tiltwheel. I guess on Altaira's split with the Dukes they got Davey singing on a track and so they were trying to play that song. But time was short and they were arguing with the bookie. The bookie-turned-MC kept jumping on stage in between bands saying the dumb shit you might expect a dumb drunk guy to say. To end the story: Bookie McDumbshit one, Altaira zero. And that was my fifty-three minutes at the Spring Break McTurtle tour of 2004.