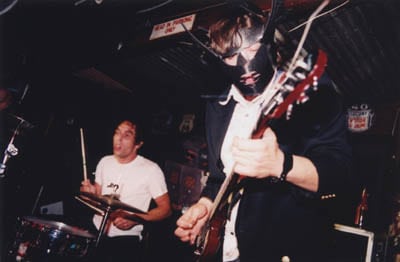 When I walked through Zen Sushi's front door at 9:15 and saw the night's set list, I felt like an old man: contrary to the 9:30 time frame I was told on the phone, the Spits weren't taking the stage until 11:15. My heart sank. I knew with absolute certainty that tomorrow's workday would be a bumpy ride, but the road to rock 'n' roll glory is paved with excess, self-abuse, and sleepless hours. Plus, the last time I saw the Spits, I was so full of whiskey sours that I all but passed out at the show, so I wanted a rematch. I sucked it up and headed across the street to Bogie's Liquor to bolster my resolve. Taking a line from the Spits themselves, I bought a Coors tall boy and headed into the dark Silverlake streets behind Zen to kill some time and "take back the alley."

This promised to be a show to be reckoned with: hailing from sunless Seattle, the Spits are head and shoulders above the crop of new wave bands that have latched onto the recent '80s retro wave. Breaking away from the pack, they don't wear futuristic shades or roll their jacket sleeves past the elbows. Their sound is dark, mean and sinister, built on simple three-chord guitar riffs and spooky keyboard stylings.

They're not afraid to be a party band either, as the song "Let Us Play Your Party" testifies, often playing gigs in funny costumes or rubber masks. Their performances in the Pacific Northwest have become the stuff of legend: armed with smoke machines and wigs, they always keep things interesting. One famous Portland, Oregon show was at a sleazy strip-club, where the dancers continued to grind while the band played. 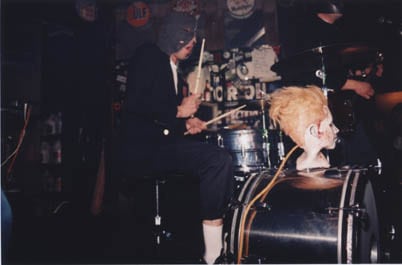 Instead of slavishly mimicking '80s new wave hits from the major label likes of Devo and Blondie, the Spits delve deeper into the fetid junkyard of music history for their inspiration: informed listeners will recognize the sounds of LA's seminal keyboard punks the Screamers, as well as garage punk bands like Afrika Corps, amidst their songs. In the last few years, they've released a handful of singles and three smokin' self-titled albums. I'd been anticipating this concert for days, since they rarely tour.

When I returned to Zen forty-five minutes later, things were finally shaking. An opening band called the Mormons were already on the job. Their gimmick was good for a cheap laugh (all five band members were dressed in white shirts, black slacks, ties with back packs and bike helmets), but their sound was sadly undeveloped - a dash of Devo, a dash of Talking Heads and none of it mixing together too well. Yet another yawnsville attempt at "New Wave."

The party started when the Spits made the scene: they took the stage dressed in green surgical scrubs, complete with face masks, and their trademark butt-rocker wigs. Without so much as a how-do-you-do, they whipped into their set. The crowd, which had been somewhat anemic before, suddenly filled all available space in front of the stage. The band was loud, loose and energetic. They played a few songs from their new Dirtnap album, including the stand-out "Witch Hunt," and a few from the previous LP, rough anthems like "Take Back the Alley" and "Rat Face." I was grateful they steered clear of their few noise numbers in favor of their boppin' keyboard-laced skate-punk madness.

A drunk girl jumped on stage and gyrated around. The moshers up front (it was an all-ages event) accidentally knocked her into the drum kit. She went sprawling with a clash of cymbals and someone helped her back up and out. Moments later, she was back on stage, fulfilling drunken go-go dancer duties. The Spits didn't miss a beat. They were more about spontaneous energy than perfect music. A little later, two guys up front got into a fistfight. I felt like I was in Decline of Western Civilization. It was almost funny, like an exaggerated cartoon. Two young men swinging away at each other, momentarily locked together, then yanked apart by other concert goers. One broke away from restraining hands and dived back into his opponent, slamming his fist into the guy as he went down in a whirling mill of bodies. The look on the puncher's face, frozen in my memory for all time, was a mask of what can only be described as a crazed kind of joy. "Hey," called guitarist Sean, his fingers pausing over his frets. "No fighting." And before the bodies had been cleared, they whipped into their next frantic number. 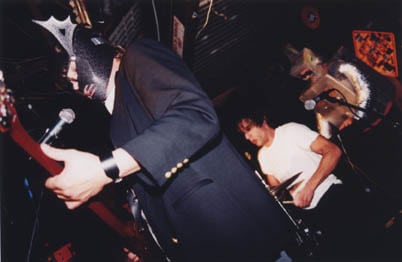 Despite the late hour, a new energy was coursing through my veins: this was punk fucking rock. It had been a long time since I'd felt such exhilaration at a show. No one there was untouched by the music. Everyone was focused on the stage. There was an element of danger, a whiff of mayhem, just barely contained. I decided I needed to take in all-ages shows more often. The last song before the lights blinked on was a rousing version of "SK8." I felt like I'd gotten my $5 worth of entertainment.

Of course, I felt differently when the alarm went off at 5:30 the next morning. But that's what coffee's for.