All photography by Eric Rife.

Sometimes, going on last can put a band in a very fucked position. On the evening of August 16th, Speedbuggy could be excused for not enjoying the same sort of enthusiastic response they usually get. Not that their show at the Garage wasn’t good, but when more than half the audience is there for the farewell show of the Streetwalkin’ Cheetahs (and subsequently leaves immediately after), it can put a damper on the evening.

The Garage, a small, corner bar located in Silver Lake, CA, is the sort of place where old timey punks feel right at home with a modest, but cool, décor. With a few minor additions, one could even pull their ’67 GTO in here for a little detail work. Like a lot of people, it makes me feel kinda creepy going to shows where most of the kids are half my age. Call it fear of mortality or whatever you want, but I prefer to listen to bands my own age and be served drinks by people my own age. The Garage provides both.

The night started with the Dolls-y posturing of San Francisco’s American Heartbreak, a punk-cum-glam-cum-garage band with a rather odd pedigree. The music press has dutifully reported the group is made up of ex-members of Exodus, Jet Boy, Mordred and the Bay City Rollers (although none of the band members appear on any BCR albums or websites that I can find). Regardless, their trashy image has earned them a huge cult following in Japan and rave reviews from the British music press. Although their commitment was apparent, too often the band came off sounding more Goo Goo than New York.

Much more up to the occasion was the Excessories, featuring the husband and wife team of Melanie and Rich Coffee. Hailed as the best thing in punk pop since the Muffs, the Excessories mine the common, but fertile ground sowed by such compatriots as Cheap Trick, Redd Kross and (most commonly noted) the Muffs. But unlike some who have gone before them, the Excessories maintain a certain edge that never really wavers into banal love songs or cutesy poo harmonizing. Like Rick Neilsen at his hyperkinetic best, lead guitarist Rich Coffee is a musician possessed with an overwhelming desire to perform , jumping and flying around the stage, and in a moment of pure abandon, taking his whirlwind mania into the audience.

Melanie, whom every music crit is tempted to describe in coying terms, is really quite a dynamic frontperson – more Chrissie Hynde than Debbie Harry. Although her publicity photos usually show her dressed up in fashionable, girly clothes, Melanie is more of a t-shirt-and-jeans kinda gal and it shows in her vocal stylings as well – especially on “Punk Rock Boy,” an answer song of sorts to the Dead Milkmen’s “Punk Rock Girl.” 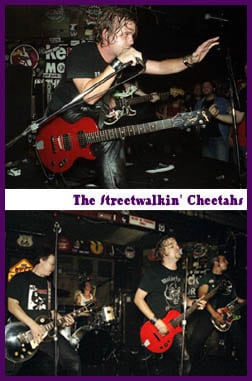 After serving more than seven years as LA’s vanguards of meat-and-potatoes punk rock, the Cheetahs called it a day (at least, temporarily) with a kickass, forty-five minute set. Opening the show with “Mama Train,” guitarist/vocalist Frank Meyer, drummer Eric Herrmann, bassist John Ramirez, and lead guitarist Art Jackson, charged into every song with the same sort of fury unleashed by the band’s most obvious influences – the MC5 and the Saints. The band raced through a set including the frantic “No More” the salutatory “Motor City Rock’n’Roll,” and “Future Lost,” which saw Meyer and Jackson work their way through the audience for an impromptu, bar top guitar duel.

Although the band omitted some of their finest recent moments – the over-the-top cover of “Know Your Product,” the detox hysteria of “Coming Down” and the extended jam “Dirty Mockingbird,” – their encore salute to the MC5 would do both bands justice. Original bassist Dino Everett (now one of the Excessories) and Frank’s actor brother, Breckin, took the stage to lend a hand on two visceral covers, “I Want You” and “Black to Comm.”

The Cheetahs maintain that despite the geographical relocations of some members (Jackson is moving to Vegas and Herrmann is moving to England), the band is NOT breaking up, but rather, will simply not be touring to promote their upcoming release, Gainesville. So if you weren’t here for this show, you might just have to book a plane to Europe, the most likely place they’ll be playing next.

By the time Speedbuggy took the stage, a very sizable portion of the audience had downed their last drinks and wandered out. What remained was a very rowdy clutch of greaser punks, one of which showed his appreciation for the band by throwing half-empty beer bottles against the back wall of the stage. Unperturbed, and perhaps a little emboldened as a result of their reception, the self-described cowpunks plowed through an amazing set that no one should have missed.

Eric Rife is a writer/photographer who makes his living as a librarian in the History Department at the San Diego Central Library. But he’d quit in a minute if he thought he could make a living shooting punk bands. Check out http://photos.yahoo.com/librarianeric to see over 20 years of live concert photography.