Last time we ventured to the Dog and Partridge on the outskirts of Manchester was to see Leatherface and the Great St Louis. That was a great night, early spring evening, beer flowing, and with great performances by both bands. Could this evening aspire to achieve similar lofty heights?

The line-up was an interesting one, a bit of what I might deign to say was a latter day genealogy of the best of British underground punk.

You could tell this was going to be an interesting one. Niall (Hope/Internet Radio) had flown in from Dublin Ireland, Craig (Don’t Be Shy Of The DIY) had wandered across from what was once known as The People’s Republic of Sheffield and there were esteemed representatives from the northern lands of Scotland, the western provinces of Bristol, and even the distant and imaginary metropolis of London. Right from the start we could tell something strange was happening. At the end of the day, this is a DIY punk gig of British bands in Bolton and people don’t normally travel. It reminded me of the Eminem song and the quirky Sarah Palin video for the song ‘We Made You’ which has the lyric ‘we invited everybody and everybody came’, but this was way cooler and would read more along the lines of, “we mentioned this to a few people who we thought might be interested… and they all came and even brought along their friends.”

The heavy traffic on the cross-county route from Blackpool ensured we arrived late. We were disappointed to miss John (The Doublecross) doing a solo acoustic slot. I was reliably informed by Ryland that he had played well and was well-received. I have heard a few of John’s releases; they are all fairly solid mid-paced songs which are well-crafted and pleasing on the ear.

Next to take to the stage were the North Manchester outfit Holiday. My working knowledge of the band was their great four-track debut 7” single on beautiful mint green vinyl, a few e-mails we have exchanged, and a recent video interview shot after a show in Berlin. The 7” single received some really positive reviews and one of the quirkier and more memorable aspects of the four songs that struck many listeners are Matt’s distinctive vocals. The band certainly has northern punk rock pedigree with the drummer hailing from the aforementioned Great St Louis and the other members cutting their teeth and honing their skills in bands such as The Autonomads, Black Star Dub Collective, Dead Subverts, and PaperTown. The band didn’t disappoint and with “Missiles on the Roof” and the inestimable “Sunshine” probably being the choicest cuts of a good set. They played with an intensity that impressed me, more so than the single suggested they would. Matt’s vocals cut through really well. They even dedicated a song to some idiot from Blackpool who helped release their single. 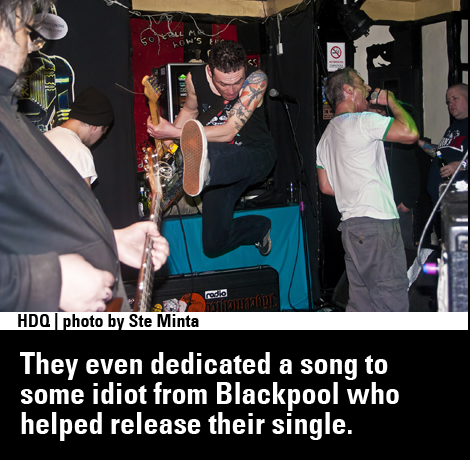 Then Stay Clean Jolene took to the stage to make their local debut. The band had only played one previous gig at a festival in Dundee to a small yet appreciative audience, so this one ranked as their biggest to date and hopefully the dawn of greater things to come. SCJ are best understood as a well-balanced equation of two distinct halves John and Dan (Great St Louis) along with Will and Neil (The Leif Ericcson). So whilst there is pedigree in abundance there is also a great blend of gruff and melodic vocal harmonies, chugging guitars, and clever licks that represent the most vital ingredients in the concoction of a great band.

The crowd waited expectantly for the local boys and we all willed that they would make good, and indeed the boys “did well” as a local football manager might say in his post-match interview. One website had already described the band as destined to fill the hole left in the wake of Frankie Stubbs (Leatherface) latest departure from the U.K. scene, so no pressure there then boys. To date, their output has been a three-track 7” and a few studio tracks that have sneaked their way into the digital ionosphere, appearing on various websites hinting something pretty amazing could be coming our way. I secured a vantage point at the back of the room perched precariously on a bar stool beside the PA desk. The engineer kept fiddling around excitedly with a laptop which was emitting lots of bright lights from its various bar charts and wave formations, the significance of which will be revealed later.

The Stay Clean Jolene set was amazing and I understand that that is a big first word to describe a gig, but on this occasion it is apt. The mix was impeccable, the drums, the bass, the guitars, and the vocals all streamed through beautifully to delight our cerebellums. Good energy throughout with even the rougher edges seeming deliberate. It may be too much to say it was a case of effortless brilliance because you can just tell how vocalist John Dagger means every word as though it might be his last. Dan, Will, and Neil play every note like their lives depend on it.

It was time to draw breath, compose oneself, and re-trace my halting steps to the bar for just another pint of the fine local delicacy that is Flat Cap Bitter. Between songs John had announced excitedly, “Southport and HDQ at the Dog… fucking mint!” and next up in Bolton’s finest watering hole are indeed Southport.

Last time I had seen Simon and the boys was at a very enjoyable all-dayer in Wakefield with Caves and The Magnificent. This time Southport played without their keyboard player (a Millwall fan if I remember correctly) and after a few initial bass-related problems the three-piece launched confidently into one of their typical soulful and harmonious sets. Judging by the number of rhythmically nodding heads in front of me everyone knew the songs and so they should. 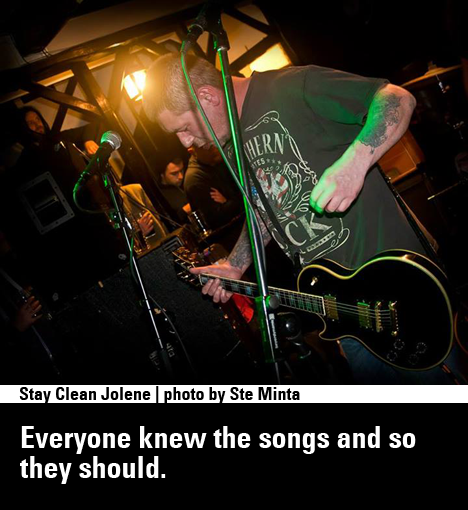 Simon is a great songwriter and their last album Southern Soul is excellent. My favorite track of the album is the opener “Slide.” In fact, it’s a bit of a masterpiece of which I never tire and after its slow, meandering introduction the band launched into it with absolute aplomb. We marvelled as Simon attacked the microphone with closed eyes, like a young child enjoying every last slurp of a delicious ice cream. I think we were all feeling it and enjoying it with him. After a few older classic Southport tunes and the boys exited to rapturous applause and demands for another, to which they duly obliged.

Next up was Sunderland’s HDQ. The melodic powerhouse guitar-playing of Dickie Hammond, such a staple constituent of that distinctive Leatherface sound, sits well in any band. Last time I saw Dickie playing with HDQ was at Rebellion Festival in summer 2013, he was very drunk, very happy, and made up to look like a wolf-man apparently to annoy some of the less politically engaged who frequent the aforementioned event. No such adornment this evening, he just provided the solid foundation stones around which the band develops and delivers its songs.

I had only caught the back end of their set at Rebellion, so I was pleased to be able to enjoy a full set, occasionally raising my penultimate pint of Flat Cap in appreciation. Again heads nodded, people clapped, and drank in unison. It’s hard to compute, but it really is twenty-three years since the band’s last release. In the intervening epoch what now persists as HDQ (Dickie and Golly) have what could be described as a more matured and polished sound and their latest release Lost in Translation is arguably their best to date, aptly described by Punknews as “the perfect comeback.” Since the gig the CD has been a favorite, accompanying me all over Milton’s green and pleasant land. Always notable for high energy and fun, the band duly obliged.

What an enjoyable evening. Niall sold all his fanzines and Sarah extolled the virtues of Southport to anybody who cared to listen. Oh yes, and the significance of the sound man’s computer is that he has provided the soundtrack to the last hour of my life by providing some pretty amazing live MP3s of the SCJ tracks I have been listening to whilst typing up this review—believe me they are great and the world needs to hear them. So click this link and you can smile…