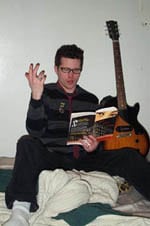 Somebody Still Remembers Rick Springfield: An Interview with Chaz Halo by Brian Mosher

Over the course of a week, more or less, Chaz Halo and I exchanged some emails, which I then compiled into this interview. I don't really know Chaz. We've never met, but I have taken a few peeks inside his mind through his LiveJournal, and I've really enjoyed both of his homemade solo discs, both of which are available by contacting Chaz at [email protected], or through his website, www.angelfire.com/punk/haloes. He's the former leader of Boston's almost legendary power-pop/punk outfit, The Dimestore Haloes, who probably never had a real shot at commercial success given the fact that their music was so good, and the fact that they were all a little unbalanced.

Chaz is a very talented guy. But, this being the world it is, where our society places more value on the size of our vehicles than on the arts, very talented people like Chaz Halo don't often find success. Instead, they have to stack apricots and canteloupes in the all-organic food store that caters to upper-middle-class snobs who don't know their Exploding Hearts from their elbows. Or they have to shuffle paper in the nine-to-five world of Fortune 500 Financial Institutions, whose only function in the world is to siphon money out of the pockets of regular people and into the Swiss bank accounts of the friends of George W. Bush. The only thing that gets people like this through their day without shoving an apricot up the nose of some Volvo-driving, Ben Folds Five-listening asshole is the non-stop soundtrack in their heads. And the source of that soundtrack is people like Chaz Halo. Now, step inside, and don't mind the fact that the apricots look disturbingly like Bart Simpson's ass. 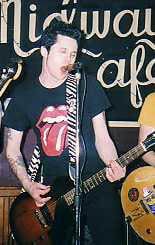 Chaz: We didn't schmooze, we didn't tour enough at all, we were arrogant (as theater/irony, but nobody got it), we were all mentally ill, all of us, in some form, certainly dysfunctional, and people thought we were unreliable, unstable weirdos, which was right on the money, babycakes.
Brian: Do you have any immediate plans for a new band?
Chaz: Um, in a lazy sunbather kinda way. I'm on the lookout for hot rockers and I've got a steady willingness from ex-Halo Jake Wark, king of suave bassplaying coolness, to rock with me whenever I feel the need. If I found a REALLY hot and reliable drummer I would do it, but I'm only looking as an afterthought right now. I'm a studio songwriter at the present, with no real burning desire to perform... yet. But I'm making records and they're out there, and soon everyone will know this.
Brian: As great as your homemade solo discs are, do you think the songs could be recorded even better by a full band?
Chaz: Nah, because this way I can make 'em sound like they sound in my head, and if I fail, there's no one I can blame. With the Haloes, a few really good songs were kinda ruined by people who didn't care much, you know? So yes, I'd like to have a band someday, or more specifically a ryhthm section, but right now I just want to record my tunes myself and get 'em out there.
Brian: You talk a lot about your girlfriend, Jenny. Does she have any aspirations to be a rock star?
Chaz: Nope. She's gonna be a nurse. I need a nurse! She plays a great piano, I mean she's really fucking good, but she has no desire to write or record or perform. Her keyboard skills will be used on future Chaz Halo discs though, I'm sure. She doesn't seek the limelight. In fact she may not even dig that we're talkin' about her in print, boy-o!