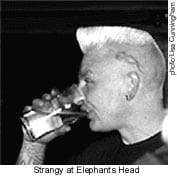 Somebody Buy Me a Drink: Graham Russell's "Bitterness Personified" Column

Camden Town in North London has become gentrified in recent years, but The Elephants Head pub on the corner of Camden High Street remains a gloriously rough-edged, unvarnished patch of pre-Starbucks and Gap old Camden--like a stain. It's redolent of the days when Camden Market was still a treasure trove of chipped China dogs on card tables and the main street still had a totally idiosyncratic, beer-sodden, aimless atmosphere. In these days of anonymous identikit pubs, The Elephants Head still reeks of aggressively shabby, low-life anti-charm--a cherishable quality.

Previously, its closest spiritual equivalent probably would have been The Good Mixer around the corner on Inverness Street, which provides a sort of cautionary tale. A true, old-fashioned spit-and-sawdust old-man's pub with a peeling, threadbare decor, it was conveniently situated across from Arlington House on Arlington Road, a halfway house for elderly, mostly Irish alcoholics, who (seemingly permanently off the wagon) provided the gin-blossomed clientele. It was always respected as their territory; we were the gatecrashers. When I first moved to London (1992) it was still the preferred local of the Bryl-creemed members of the band Gallon Drunk and their satellite bands (first The Stingrays, then The Earls of Suave and now The Flaming Stars). Gallon Drunk actually wrote about the neighborhood and milieu in the song "Arlington Road" on their 1993 CD "From the Heart of Town." The memory of the Good Mixer's jukebox, seemingly unchanged since the late '60s, still makes my eyes tear up: prime rockabilly and country & western. Screamin' Jay Hawkins' "I Put a Spell on You." Johnny Cash's "Ring of Fire." Elvis. Roy Orbison. Patsy Cline. Nina Simone. Nancy Sinatra and Lee Hazlewood. You know: drinking music. The pub was always a popular haunt with local musicians. In the mid '90s this began to include the emerging new generation of indie rock bands like Blur, Oasis, and Elastica. When Britpop exploded, The Good Mixer was namedropped in virtually every magazine article about Cool Britannia. Wannabe Camden hipsters, students, Britpop indie kids, and tourists from all over the world began congregating there to star spot and seek cool by association. The delicate ecosystem of the bar's seedy ambiance was destroyed and the old crowd squeezed out. After not having been there for maybe a year, I ventured in and unthinkingly immediately pumped money into the jukebox. To my horror I didn't realize until afterwards that all the old records had been yanked and replaced with Top 40 Britpop singles. That was many years ago: I never set foot in that two-bit pop stand again. 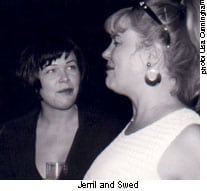 t's unlikely The Elephants Head will ever become similarly trendy. . .thank Christ. The pub's name derives from the fact the Elephant Pale Ale brewery used to be located across the street. (This building now houses the studios of MTV Europe!). During the week the bar is pretty nondescript. It's on weekends, when it features live resident DJs that it squirms to life and your lost weekend begins. You'll recognize the place from the motorcycles and sharp-finned vintage cars parked outside. Push through the swinging doors and feel your blood pressure instantly plummet. Saturdays are 1950s rockabilly (with DJ Mouse) and Sundays are ska and northern soul (with Shaun and Mick). Food and coffee are available, but who cares? If that's your priority, you're in the wrong place. One of the chief attractions used to be the much-missed French bartender Cyril Roi. A pasty-skinned, debauched looking cult figure in waiting, he plays bass in garage punk bands like Dollicious, The Sires, and The Bristols. Unlikely as it sounds, Cyril's currently living in Japan with his girlfriend Aiko, but in the summers he used to work behind the hotdog stand outside wearing a beret, with a cigarette dangling from his mouth like a French nouvelle vague anti-hero. If you asked him nicely, he'd regale you with intimate details of his sex life in a guttural rasp saturated with Gitanes smoke. 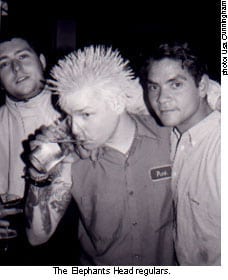 The Elephants Head clientele--rockabillies, psychobillies, bikers, skinheads, punks, assorted lunatics straight out of a David Lynch film--look fierce. But in spite of appearances, facial scars and prison tattoos aren't mandatory in order to drink there. It may be the kind of crowd who, if the DJ played Link Wray's "Rumble," look apt to break into a spontaneous knife fight, but actual violence is rare. OK, rare-ish. And outsiders rather than regulars usually initiate it. The Saturday night rockabilly sessions, in particular, are a blast. With Mouse blaring Little Richard or Charlie Feathers, surrounded by side-burned billyrockers and their bullet bra-ed girlfriends with Bettie Page hairstyles, it feels like crashing into your own private 1950s juvenile delinquent flick. You half expect The Wild One era Marlon Brando to swagger in. See you in there. Mine's a pint.

Endnotes:
Thanks to my drinking buddy Lisa Cunningham for taking the photos of Elephants Head regulars. Lisa resides in London's East End, plays saxophone, used to manage the band Delilah Jacks, and was briefly in a band herself called Beaver Las Vegas. Her Mohawk is growing out nicely. Check out Lisa's website: http://www.girlracer66.fsnet.co.uk.

After five years Tina Caruso (aka Prowler Burd), the lead singer of local garage-punk bad girls The Dirty Burds, has quit the band. The split was amicable and The Dirty Burds intend to carry on without her. Tina's now fronting Suicide Milkshake full-time, a new band she's formed with her boyfriend Jake, the drummer from 53rd & 3rd, a Ramones cover band. Suicide Milkshake have already released their first single, "Ride with the Tide," on Submerge Records. http://www.suicide-milkshake.co.uk 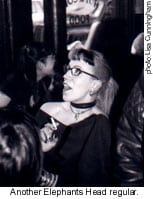 Britain's loss is America's gain: The ex-Headcoatee Holly Golightly has moved to the US and is currently living in San Francisco. She's assembled a new American band and is recording and playing in the US. I know she plays gigs fairly regularly at Bottom of the Hill and recently shared a bill with White Stripes.

An update to the Dollicious interview on the website: That interview was written ages ago. In the meantime Get Hip released the band's debut single ("Cold Cinders/Sevens") last year, and singer Jane and drummer Johnny got married. I was at their wedding reception: it was swingin'. The Dollicious line up has changed a bit since that interview (for one thing, their bassist Cyril moved to Japan, as explained above), but they are preparing to record a full-length debut CD.

Another recent punk rock wedding: The demented punk poet, cross-dresser, artist, and Billy Childish associate Sexton Ming married his American girlfriend, the artist and musician Ella Guru (who used to play in The Voodoo Queens) in April. (The couple play together in the band The Tasty Ones, with former Headcoat bassist Johnny "Tubbs" Johnson.) They had a gender-fucked wedding in Dorset, with Ella clad in a tuxedo and top hat as the groom and blushing bride Sexton resplendent in a long white wedding dress and platinum blonde wig, with drag queen bride maids in attendance. Check out the wedding photos for yourself on http://www.support.synergy-interactive.co.uk/ella/wedding/wed_pix/. 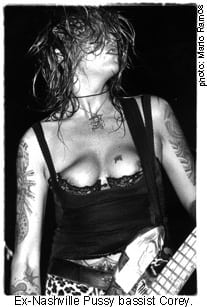 Nashville Pussy played in London on the Fourth of July. It was only the second time they've ever played in London, and the first time I've ever seen them. (So I never got to experience Amazonian former bassist Corey's fire breathing shtick.) Anyway, the new line up was fierce, and they pulled a sold-out crowd of punks, psychobillies, metal heads, and even some ageing bikers with paunches and gray ponytails.

OK, my diet pill's starting to wear off, and you're getting on my nerves. Contact me at [email protected].