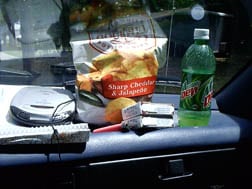 Ever since I moved to Gainesville, FL, it seems that I've gotten lazier. It might be the hot, sticky air. It might be the over-all slothfulness of the drunken inhabitants. Either way, the protestant work ethic which was engrained into me during my Midwestern upbringing has gone by the wayside in a few short months. Not that I embrace the idea of working myself to death the way a lot of people do, I just feel like maybe it's time to start writing again. And what better place than here? In this, my first column for Razorcake, I'll be discussing one of my personal favorite things. The overnight drive.

Let's see if this scenario sounds familiar. It's 3 a.m. The show is over. People have scattered into the darkness. The equipment is loaded, and so are your traveling companions or band mates or whoever. Looming ahead of you is a long drive that, as the lone sober person, you have been nominated to undertake. You feel exhausted and definitely not up to the task of driving overnight.

It seems impossible, but it certainly is not. If you have the ability to alter your attitude and look at the task as a challenge rather than a chore, the likeliness of success is greatly increased. Set goals along the way and stop seldom.

As you go, be sure to watch for signs that you are too tired to be behind the wheel. The first and most obvious sign is yawning. Next comes eyes that burn and practically beg to remain shut when you blink. These physical signs can be overcome pretty easily, but once you start experiencing the mental signs, it's time to pull over.

If the lines on the road or headlights from other cars begin blending together, you don't have long to go. The next step is usually hallucinating. If the road ahead of you takes on any shape other than a road - for example a gate or a lake - you may be in trouble. Also, when you start convincing yourself that resting your eyes for just a few seconds is okay, you're done.

There are a few things that you can do to help yourself. Having a beverage is of the utmost importance. I suggest Mountain Dew because of its high caffeine content and the largeness of the bottle. Red Bull is a good idea, too, but the cans are pretty small and don't last long. Also, having an empty bottle with a cap is a good idea when you have a van full of people who have been drinking all night, and you don't want to stop every half hour when one of them wakes up needing to pee.

But what if you don't like soda or aren't a caffeine person? Grapefruit juice is a great alternative. The fact that it tastes tart and sweet, and has that fresh citrusy smell is very stimulating to your senses. Also a little extra vitamin C content never hurts anyone traveling in such close quarters with so many other dirty punk rock fuckers.

Sunflower seeds give your mouth something to do, only if they are the variety in the shell, though. Getting the shelled ones kind of defeats the purpose. Suckers work the same way. Hard candies work in a pinch, but since suckers have a stick, they are harder to swallow and choke on if you start to doze. I recommend blo-pops. With the gum in the middle, you'll have something to chew on for another short while. The gum loses its flavor pretty quickly, so with its inevitable disposal, you automatically have more things to do.

A trick that I discovered during the last leg of a twenty-hour drive is jalapeño chips. Those little bastards are a jolt to any tired person's taste buds, and smokers have the opportunity to enhance their power tenfold. If you smoke a cigarette while eating jalapeño chips, something happens between the little leftover jalapeño flavorings in your mouth and the smoke; a pleasant chemical reaction of sorts. Well, maybe not pleasant

Out of all the suggested items for remaining vital during a grueling nighttime drive, music is by far the most important. Rocking the fuck out is the best mental and physical stimulus in this situation. Listen only to albums that are predominately up-tempo, and to which you know most of the words. Bands like Strike Anywhere, Hot Water Music, and Dillinger Four are usually in my CD player when I'm behind the wheel. Oddly enough, though I love them, Leatherface tends to put me to sleep while driving at night. There is something strangely soothing to me about Frankie Stubbs' voice, so I save them for daytime drives. It affects everybody differently, though.

So basically, be safe while you're out there. And if none of the things that I recommended help you at all, there's always good old trucker speed, right?