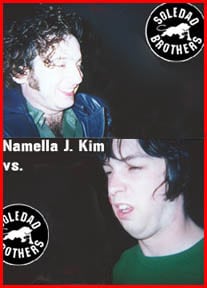 Soledad Style: An Interview with the Soledad Brothers By Nam

Maumee, OH: Two bored twenty-something man/boys jam out in their bedrooms, eventually making it all the way down the basement where the stairs creak, the spiders bite, and the must has to be so foul that one would hardly fathom breathing in those microspores, but the Soledad Brothers did just that one fateful day and the result has been nothing short of a magnanimous victory against musical mediocrity. Countless empty beer bottles, broken hearts, spite for the system, and the fucked up state of the world as we know it has spurred one of the best new musical acts to grace the stage here at lovely Los Angeles's Spaceland on Tuesday night. The Soledad Brothers (not "Bros.") began with drummer Benjamin Swank's (née Smith) ardent love of the blues skewed with that punk rock abrasion that makes all music worth a damn. Mr. Swank began playing in a band named, curiously, Henry and June, after one of the greatest twentieth century American writers and his wife. Johnny Walker soon fell in with Mr. Swank with a somnambulistic response to the love of blues that they both shared. They quickly emerged as The Soledad Brothers with a debut single on Italy Records entitled Sugar and Spice which garnered them a cult following among blues punk rock audiences. The Soledad Style is an uncompromising dedication to get loose, get busy and get wild, and they had managed to perk up the keen ears of Dave Crider at Estrus Records who released the self-titled full length debut. The next move for our Soledad Brothers is a new album called Steal Your Soul and Dare Your Spirit to Move (I love them literate rockers!). They've added on Mr. Oliver Henry to the lineup to add his sax and second guitar handiwork. What you see is what you get with The Soledad Brothers, and the Soledad Style, my friends, makes you want to move with the power of Christ and the Devil-locking horns amidst the fury of the days of the coming Apocalypse - now.

The scene: Backstage, where the beer is at. 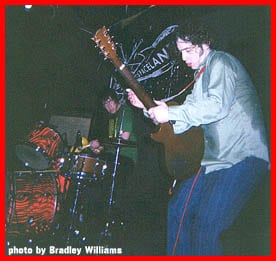 Nam: What the fuck are we talking about? Here, I'm drunk so he's gonna do it [points to poor Bradley. The guys fumble around for last minute equipment collections after the set].
Ben: [breathes heavy]
Nam: Oh, I have to put that on my answering machine… I'm standing here next to Johnny Walker. Please describe Soledad Style.
Johnny: It is good clean fun. Nothing but the cleanest of fun.
Nam: Are we talking about soap-and-water fun or drugs-and-partying fun?
Johnny: Mostly just the blues part for me.
Nam: So, how did this music come about?
Johnny: I've been playing blues for about six or seven years and I basically started out playing on the (street) corners for change and it was just a way to get a bite to eat. It was a way to hustle a little money.
Bradley: Where was that?
Johnny: Toledo, Ohio. There's not a lot of money there.
Nam: I can imagine. Hey, aren't those hicks very apathetic towards the blues?
Johnny: Uh-uh (no), they love it. Oh yes, Toledo's all about that shit. They have the best shows there. If we were in Toledo right now there would be about three or four people puking in front of the bar right now.
Nam: Uh, I'm not gonna say anything right now.
Johnny: (sniffing the trap) Just because they like to drink. People dance in Toledo. LA is pretentious.
Nam: Well, you have to realize that LA is "very pretentious." We show up in droves but we like to drink. Some of us do like to dance though.
Johnny: (Toledoans) like to drink AND dance. If you haven't noticed.
Nam: No, I have noticed. You guys are all up on it. Yeah, what's up? So, how do white dudes from Toledo, Ohio derive their inspiration to rock?
Johnny: There's nothing else to do.
Nam: Oh look, here comes that really cute guy. [Distracted] We're like drinking right now and this is all just cold fusion now.
Bradley: It's the drummer and his name is…
Ben: Hi, I'm Ben.
Nam: Ben, so how did white dudes from Toledo derive their inspiration to rock?
Johnny: I mean there's nothing else to do. I mean we fucking hang out and play music all day long, smoke a bunch of cigarettes.
Nam: What happened to college?
Ben: [dreadfully] Oh no.
Johnny: You end up like me.
Ben: I've been in college for fifteen years. I'm gonna be a doctor in June. I'm gonna be an MD in June. I have fifteen years of schooling under my belt. I'm gonna be a psychiatrist.
Nam: Oh no. You're gonna kill yourself if you do that, you know. OK, how did you get John Sinclair to write the liner notes describing Soledad?
Johnny: We backed him up in Cleveland for a show and I drove him to Ann Arbor, MI and we've been the best of friends ever since.
Bradley: Was it one of his poetry shows?
Ben: Yeah, he was doing spoken word.
Johnny: Except Ben and I were backing him up.
Ben: He came over to our house and we jammed.
Nam: Oh, and he approved, gave you the thumbs up.
Ben: He told us stories about the MC5.
Nam: Did he talk about jail?
Ben: No, we didn't ask. That's just harsh.
Johnny: He's a laid-back guy and he DJs now. People should have more respect for that guy and pay more attention to what he's doing. People should definitely pay more attention to what he's doing and saying.
Nam: You guys should bring him out just to even introduce the band or something, just get him out there. You know, Wayne (Kramer) is down here and they should do something together.
Johnny: You know, Wayne and John are super tight still.
Nam: Well, you guys should talk them into getting back together - hello! Okay, so was there a multi-label bidding war for your album? [Everyone's making "eeeeh, wrong answer" quiz show noises.] Wait, shut up! OK, Long Gone John (Sympathy For The Record Industry), Dave Crider (Estrus), and Larry Hardy (In the Red) sitting around a motel room in Austin with a pile of cocaine and a bunch of fucking strippers going, "Yeah, what's up?"
Ben: [regretfully] No, that never happened.
Nam: So, how did you get on Estrus Records?
Johnny: We had our debut single out on Italy Records (A great label that put out The Dirtys back in the day and released the posthumous Larry Dirty single. Props to them.) from Detroit and I didn't think it was spectacular. No, it really wasn't spectacular!
Nam: Oh shut up! You know it was good. Why would I be here if it wasn't?
Johnny: Who knows why they made you come.
Nam: Hold on. Time out. No one gets paid doing this. Look at this! [Pointing to cheap little micro cassette recorder just purchased that day.]
Ben: Did you pay for that out of your own pocket?
Nam: Yes, I did!
Johnny: [Says something really offensive.]
Nam: Fuck you, asshole! [Makes beating up noises.]
Johnny: I wasn't gonna say anything about that.
[More garbled exchanges about The Lords of Altamont, Thai Elvis, and things not pertinent to the interview.]
Nam: If you had twenty-four hours to take buckshot to anyone, like in the back cover of your old CD, who should wish they wore their bulletproofs that day?
Ben: I'd put every CEO of the Fortune 500 on there and - I don't know, pretty much anybody of authority. I don't know how to put it, but everybody on that list deserves to die.
[Johnny takes the liberty to peek at my notes and ask the next question.]

And for the ever-crankin' music machine for a label, click: http://www.estrus.com