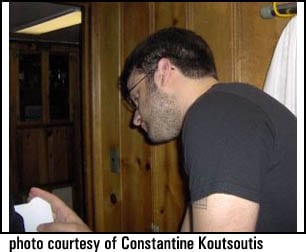 So a College Professor Walks into a Punk Show…: Constantine Koutsoutis' First Column

Most days, the name of poet John Clare’s publisher during the 19th century (it was John Taylor), the history of feminist Jewish-immigrant literature in the United States during the early 20th century, and maybe a little dash of James Joyce are usually swimming through my thoughts. The rest of the time though, it’s basically me musing on when I’m gonna get to go to the bar, and the lyrics to “Mrs. Brown, You’ve Got an Ugly Daughter” by the Queers. Quite the set to set the ends of the spectrum, huh?

I don’t really get upset about a lot of things because I’m basically a nice guy. Quiet, sort of funny when drunk, but not really a prick or anything like that. However, I do have my passions, like music and literature. And something I’ve found to be difficult in life is combining these two. Even before punk rock, there were books. Like, TONS of them. Picture books, comic books, regular books without a lot of pictures, books that had no pictures. While like any child of the early ‘90s I could be easily subdued by turning on the TV to draw my attention, one of the driving forces of my life ever since I figured out how to string together letters of the alphabet to form words has been reading: at the table while eating (which I used to get in trouble for); in the car, in my room before bed; on a Sunday afternoon; and over summer vacation when it was too hot to go outside. Books were an escape, a way to temporarily delve into another world that had nothing to do with my own boring life. And trust me; my regular life was pretty boring.

Now here I am, twenty-four and still the same: still boring after all these years. And I’m very rarely without a book or something to read during the day, unless of course I’m out drinking or listening to music or sleeping. At the dinner table, on the subway, in a car (if I’m not the one driving it, obviously), before bed, at a diner, at my desk at work, I’ve got my scruffy, slightly bearded face buried in a book. It’s carried over towards my future, inspiring me to want to be a writer, to teach literature, to waste a decent chunk of my life in college and graduate school studying varying aspects of literature. I’ve been studying the stories people tell and the ideas people write for a long time by now, bound in between thick paper, cloth, and leather bindings. Not as long as some, but longer than others would even think of giving up in the name of books. The ideas that have had men hung in the name of social conformity and the Church, and the stories of families brought together over the oceans to take a stab, however pitiful it might seem, at the American dream. Literary theory that has me seeing layers within layers in a cheesy “summer reading” novel that probably aren’t there, but my mind’s been trained to find them anyway. It all makes me a really annoying person to ask for book recommendations because I start to analyze every one I’d pick and start to wonder whether or not the subtext of said choice is something the person I’m recommending it to is something they’ll like.

As you can see, it gets complicated and I end up blurting a selection of choices like The Art of War and The Amateur’s Handheld Guide to Alcohol Poisoning*.

So yeah, literature, reading and writing, and all that jazz are a big part of my life. And here is where the problem beings to emerge. See, somewhere along this path towards ultimate nerd-dom, I discovered punk music. And while my exposure to non-mainstream music, media, and general ideas has helped me push myself to truly seek out interesting things (like books!) as opposed to just what I was being fed by mainstream media outlets, there’s still a problem. It nags at me and just drives a wedge in my mind between the love that I have for books, and the world and culture that seems to have built up around them like so many icicles in a snowstorm on a porch, icicles that I detest because of the class structures and behavioral patterns that they uphold.

If I’ve learned anything in graduate school it’s that the stereotype of academic snobbery, while not entirely true, is still there in some form. The elitism of literati and their attachments to “higher culture” drives me to, on occasion, toss a cup or two of homemade hydrochloric acid on someone just out of spite. It is as if, as academic and educational sub-cultures have progressed through time since the inception of educational facilities and abstract literary philosophies, such groupings and established organizations of academics and literati have purposely sealed themselves off from the outside world, very rarely allowing external influences in and even in cases of sub-genres like realism, allow very little of the outside world in. We have visions from movies and TV of stuffy college professors who lack any sort of actual social skills, frightened of the outside world and seeking instead solace in their texts. While you do see this, there is more to it. Fucking slick hipster types, secure in their social standings, are fueled and achieved through not only their literary knowledge levels but also in the incorporation of pre-perceived notions on the “proper” behavior, a so-called “upper-crust” style that was birthed out of the amalgamation of clichés, on the corner of Conservative Anti-Academic Paranoia Blvd.

Of course, whether or not said folks are actually literati and not just posers (God I hate that word but it’s the only thing that comes to me right now) who saw what they thought were real academics on TV or something is up for debate.

That’d actually be sort of funny, now that I think about it. Seeing literati on TV, hehe.

The broad spectrum of book lovers, myself included, come from all shapes and sizes from so many walks of life, it’s honestly refreshing sometimes. It reminds me that perhaps there’s hope. A love of books, rooted not necessarily in school and schoolwork (in fact, you can probably trace a lot of people’s distaste with books to school) does not discriminate. Nor should it, when the books themselves, the very books I’ve loved for most of my life, cover so many different things it’s impossible to pin down my tastes.

But anyway, back on topic, punk rock, which has helped shape so much of my life and helped me become a more confident, self-assured, and all-round better person, has taught me to look beyond institutional standards of behavior and identification. It’s taught me to look for the meat of something underneath all the fluff and other shit that gets piled onto media to make it look good and presentable in some form to the slathering heathens at the gates, clamoring. Be it sub-level mediocrity tossed to the masses or the ultra-rare and nigh-incomprehensible produced by the academic elites (more or less the same thing written sixty years ago but with newer words inserted in to “update it” every so often), in the end it’s all bullshit compared to what I’ve found in the music. In the arm-in-arm sensation you find with total strangers and the raging guitars and pounding bass and drums the music spit out. No regard for form beyond a desire to not TOTALLY blow out your eardrums.

So how is it that I can truly throw myself into the world of academia, the world of quiet study and work, of order and traditions that build up atop school atop school (of thought), studying World War I poetry, the Romantics like Lord Byron and John Clare, or even the basic tenants of literary theory (such as the applications of theory like Marxism or post-modernism) when my brain is constantly screaming “this is SUCH PUFFED-UP BULLSHIT!” at me?

Watching the news, reading the newspapers, and trying to take in news media you see it. As conservative ideals and politics establish a firmer and firmer foothold in American life and the stigma of intelligence and academics is allowed to flourish (in case you didn’t know, being an academic nerd and college grad student apparently makes you some sort of terrorist and un-American child murderer. I know, weird, right? Check the papers though, or watch Fox News or something). How can I manage to convince myself that the career choices that I’ve made are really what I want and not just the default options for a bookworm who discovered Screeching Weasel, skateboarding, and cute girls with bright two-tone hair along the way?

Sometimes I think that I’m probably crazy in attempting to try. I spend time learning and writing and, I am ashamed to say, driven occasionally to the point of wanting to swear off literature and writing off in all its forms forever, I’m so fucking sick of it and staring at computer screens and book pages and notepads of MLA citation formats. It drives a poor, tortured, and totally caffeine-strung out soul like mine to think that perhaps there is no chance for a punk like me to find balance between the music, the message, and the marks on the paper. There are always nights when I’d come home from my classes, constantly doubting my choices in life thus far. The conflict that racks my head is just too much sometimes and it makes me want to throw away every book I’ve ever read and just go work in a bakery somewhere. Not strain my mind with anything more complicated than the local funny pages.

In the end, though, I think I’ll probably always be in this sort of shit. Not literal shit of course, because quite frankly that would be terrible. Smell awful, too. However, I think back on it and something occurs to me. In all those crazy years, stress-filled and hectic, where I’m constantly wracked with the sort of emotions that normally make for a halfway readable teenage girl’s Myspace page (I know there’s no such thing, but it’s the best comparison I can think of), I produced some of my best work. As much as I hate it, in the long run I can’t seem to imagine my life without it. Not in an ironic way, but in the genuine way that you learn to see that there are some parts of your life that, as bone-crushing and aggravating they are, you can’t imagine your life without them.

All the stress, the sleepless nights struggling page by page to meet deadlines, the countless cups of coffee and cans of soda to stay focused, the shitty food and alcohol. The pounding music and sweaty bodies and beats and rhythms and words and incredible highs and lows. The friends and loves that punk rock has brought me, and the journeys through stories and lives that literature has brought me; they’re inescapable. It’s taken me a while to figure out that I can’t run from the two, no matter what. What’s more, it’s even more impossible (if that’s possible) for me to try to mix them into a single compatible beast that I can identify in my life, something I could leash and collar and add to the pack of interests I have pulling my metaphorical dogsled of life.

Don’t think of it as giving up. I’d like to just think of it as a sort of acceptance of one of those things that I just can’t change and instead embrace as an essential part of me. And instead focus on stuff I can change, like underwear and my haircut. Speaking of which…

* NOTE: Not an actual book!

Get in touch, if you care, at [email protected]