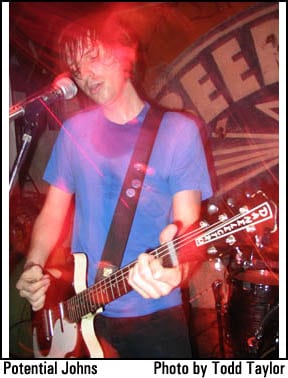 Skin Like Iron, Young Offenders & The Potential Johns: At the Knockout, SF, CA, June 26, 2008 By Federico

Before the show last night, I hadn’t gone out in awhile; a little strange for me. However, I knew the Potential Johns would be a great show to get out for. I wasn’t super psyched that they were playing at the Knockout (http://www.theknockoutsf.com/), just ‘cause it’s real small and can get kinda crampy, but it didn’t turn out to be that crowded (surprising!). So it was cool.

When I arrived at the Knockout, they were still playing bingo. As is often the case, I was unsure about exactly what time the show started due to varying information. A call to the bar itself was, unfortunately, not particularly illuminating. No matter. The bingo—which I have played once before and which I thought was actually pretty fun (it’s amazing what alcohol and a sassy number-caller can do for a bingo game)—was almost done when I arrived. Due to the numerous false proclamations of victory from the participants, I learned quickly that they were playing “Blackout”—the version of bingo in which you have to get all the squares on the board, not just a row or whatever (“You have bingo? Nobody cares. We’re playing blackout.”).

Also, they were playing The Wizard of Oz on a few screens in the bar. I love that movie, and think it stands the test of time most thoroughly. So I was happy to watch Dorothy and the Scarecrow go along their merry way while I was waiting for bingo to be over and the bands to start. I will also mention that they were playing some killer music before the first band went on. Oh, how I despise myself when I do not take the initiative to find out what song or band is playing when I don’t know. Why do I do that? Luckily for me, this is less often the case than when I do find out what song or band is playing, but on Thursday I was too busy listening and didn’t make the effort. Thus, if anyone is a.) reading this, b.) was at the Knockout on the Thursday in question, and c.) knows what song was playing before “My Shadow” by Jay Reatard, I’d be much obliged if you’d let me know! It was fantastic. Reminded me of a cross between Wire and the A-Frames. (Wire was played later, so maybe it was just a song I didn’t know?) Anyway, was probably just somebody’s ipod.

So the first band up was called Skin Like Iron (www.blacksummer.com/sli). I’d never heard them before, and still at this point the jury is out for me on whether I liked them or not. They came out strong with a nice rockin’ number. They seemed to me really fucking loud and I thought the sound could have been better. In one song the bassist did a little solo that reminded me of Bleach-era Nirvana, only a little sloppier. Their rhythms could sometimes get on the metal side of hardcore but then would even out into a more punk sound: screamy vocals and a guitar sound you wouldn’t think would fit, perhaps because the guitarist was wearing a Joy Division shirt. Made it interesting. I liked them one minute and then I wasn’t crazy about them the next. They had some unusual change ups but I thought sometimes they could have actually kept the rhythm steady for longer. They built up the last song like it was going to get all heavy and/or fast, but then it didn’t. I liked that.

In the back of the bar people were singing “Happy Birthday” to someone and I actually thought that was kinda lame. Not to rain on anyone’s parade, but perhaps they could have saved it for in between sets. It’s gotta suck when you’re the band up there playing and you can hear people singing “Happy Birthday” at the same time you’re trying to rock out.

After Skin Like Iron, the Young Offenders (www.myspace.com/youngoffendersmusic) were up. I’d reckon they’re from Northern Ireland or thereabouts originally but they’re located in San Francisco currently. I’d also never heard them before and I got a real treat. I wasn’t too into the first song, but after that, they won me straight over. Very good, solid power pop with a nice cheeky attitude to go along with it. Totally liked them. Very crisp and tight. The sound was a million times better as well, likely due to the vast difference in style between the first two bands.

The Potential Johns (www.myspace.com/potentialjohns) played last. What can I say? Love ‘em. Features Jeff and Joe from the Marked Men. I’m sure that any fans of MM would find a place for the Potential Johns in their heart as well. Many of the songs were similar in style to MM but there were also some that were a little faster and heavier—more punk and less power pop. They played at Thrillhouse Records (http://www.thrillhouserecords.com/) on Friday and I’m sure it was a great show as well!