For those of you that don’t already know, Shonen Knife (http://www.shonenknife.com/) is a Japanese pop punk band that was formed in Osaka, Japan, in 1981. The fact that all the members of the band are female draws some attention to them, although in my opinion it is really not such a big deal. Regardless, they are likely inspiring to many girls around the world, and that is definitely a good thing.

Although they undoubtedly had a solid following beforehand, they may have, I believe, become more well known internationally after the world at large learned that Kurt Cobain was really into them, and that Shonen Knife did tour with Nirvana shortly before Nevermind was released. In addition, other U.S. bands like Sonic Youth and Red Kross are mighty Shonen Knife fans. In fact, Shonen Knife has a song called “Redd Kross” on their album 712 (on which members of Redd Kross played). Redd Kross later recorded a song called “Shonen Knife” on their album Third Eye. Sweetness!

As they are touring in support of their new album Super Group, Shonen Knife did an in-store at the Amoeba in San Francisco on a Sunday afternoon, prior to their show at Bottom of the Hill. I was happy to catch them at the in-store—although usually an abbreviated set—it is always a treat to see bands that you like for free!

I have never been some kind of massive Shonen Knife fan, likely because I usually like stuff that’s a bit heavier, but they do have their heavy moments, and, at other times, songs like “Little Tree” are so fucking darling that it just slays me. However, on many of their songs, like their new one, “Super Group,” they are not quite as sweet (although it seems practically impossible for them to get away from that altogether), and you can hear more directly some Ramones influences—Shonen Knife being big Ramones fans (they have in the past played as a Ramones tribute band called The Osaka Ramones).

The in-store was super fun. Shonen Knife was energetic and seemed really happy, wearing their similar (although not exactly matching) outfits (as usual). They just seemed to be having a good time (bassist Ritsuko Taneda smiled this giant, infectious smile the entire time I think), which, in turn, contributed to my good time. Naoko Yamano, the singer and guitarist, is basically just adorable. In my opinion, there is something extra lovable about conversation between songs when it’s conducted by people for whom English is not a first language. In addition, Shonen Knife sang quite a lot of songs about food, including a song about gyoza, a song about a sushi bar, and, my personal favorite, a song about a BBQ party, with lyrics such as “Pig Out!” (repeated three times in a chorus) and, “Don’t worry about your diet!” Yes! Seriously! Totally marvelous lyrics, and ones that make Naoko and the other members of Shonen Knife that much more endearing. 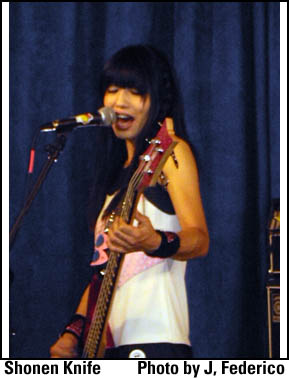 It also made me think that Shonen Knife should quite obviously play with Cibo Matto and sing all songs about food while audience members enjoyed various culinary delights.

One song that I also enjoyed at the in-store was about a capybara, which is this giant rodent that you can find in South America (looks kind of like a giant guinea pig), and there was some funny explaining going on before that—I believe Naoko said it is like a giant rat, which is not exactly an image maybe that one wants to think too much about.The last songthey played in Amoeba was a coverof the Carpenters song “On Top of the World,” which for me was a cute and fun surprise. Congratulations to Shonen Knife keeping on for over twenty years with all this fun music!