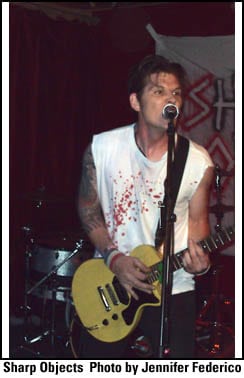 Let me say right off that I totally love Sharp Objects. Yes! I guess I heard about them a little while ago, and I knew that Daniel J. Travanti (love that name!) from the Briefs plays in them, but I missed the first couple of shows (that I was aware of). Finally, I saw them at Hemlock a few weeks ago, and they were excellent! So I went to see them again at Parkside (http://www.theeparkside.com/calendar.html) last week, and I loved them some more.

I hope I would not aggravate any Sharp Objects (http://www.myspace.com/wearesharpobjects) band members if I were to say that they sound like the Briefs, because it’s just a fact of life. With Mr. Travanti singing and playing guitar in his distinctive way, how could they not? And, of course, this is no insult in my book, as I totally dig the Briefs as well. But in my opinion the Sharp Objects don’t imitate the Briefs and they are not some kind of boring extension or something like that. They’ve got their own thing going. They are super tight and play short, insanely catchy songs. And, actually, Mr. Travanti does not even sing the majority of the songs that I have heard to date. To be sure, though, the other (more “lead” I guess) singer/ guitarist (who I think is in the Bodies?) really nails the snotty vocals that I do so often adore.

In addition to these fine fellows, the bassist just rocks the entire time. I’ll tell you, my brother (who was at the show with me), could not stop going on about it! “The bass!” he would say. Yes. He was really good.

And a nice surprise for me when I first saw them at Hemlock was that an old acquaintance, Ian, plays drums. How cool is that? I met Ian a couple years ago when I was doing Food Not Bombs in the city. He’s a chef and would often give us food donations. We talked about music on occasion and I saw his other band (the Nervous Tics) play once, but I had no idea he was now in Sharp Objects. Excellent! And he was great; I thought he especially killed it on the second to last song (the name of which unfortunately I do not know).

When I saw them last week it was a release for their new 7” on Modern Action Records: “Another Victim” / “Left without a Heart.” I picked that up, but have only had a chance to listen to it once so far. The one I got at the time I saw them before that (“Zero Ambition” / “Misspent Youth”), that one’s had a fair amount of play. I’d say I was stuck to “Zero Ambition” for a few days in a row last week. Super good stuff.

So I was excited to see them again, although the show was short (hard to be terribly long when all your songs are short) and strangely empty. They were playing with Jack Grisham and the West Coast Dukes, who I actually would have been happy to check out, but no, I had to leave to catch the BART to go back to the EastBay. While I was unlocking my bike to head out, Jack & Co. started, and from outside I thought they sounded pretty good. Damn you, Bay Area Rapid Transit System! Once again, a potentially good band missed due to the incomprehensible operating hours of the local metro system. Curses!

P.S. On Sharp Object’s myspace page, it gives their band website as: cowboycowgirl.com. I took a gander and it made me laugh. Why it should be so funny I don’t know, but there it is.