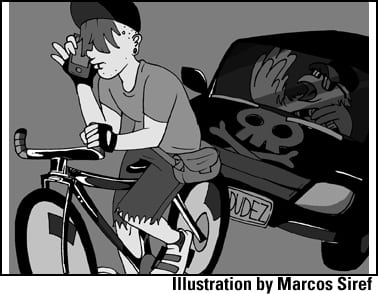 I know this is gonna piss some people off, but fuck ‘em. What I’m gonna write here isn’t very hip or cool. Yeah, I share the road with bicyclists, but sometimes they don’t share it with me. I ride my bike places. I understand the whole concept. I’m not one of those guys who rides their bike everywhere, but I still get it. I also happen to live in a very hip part of town, where lots of hip people ride their hip bikes all over the hip place. So maybe that affects this column just a bit. Unless you’re gonna actually go faster than me, don’t ride in the middle of the fucking lane. I know a lot of people ride their bike as if they were a motor vehicle, but it just doesn’t work. It’s like driving on the highway; if you’re in the fast lane and someone’s riding your ass, you move over. Unless you’re already going 80 or 85, and then you let that asshole pass you on the right. That’s what I do. There’s plenty of room between parked cars and me for your bike. There ain’t enough room for me to drive between you and the parked cars. It’s just that simple. Now I do understand that the further away from parked cars you are, the lesser the chances are that you will get hit by someone opening their car door. You can’t tell what car down the road has some douchebag in it, who is gonna pop that door open without looking. I know that, but let’s compromise. As long as I’m not gonna get hit by a car coming from the opposite direction, I will move to the left so you can too. I’m really not as big of a dick as people think I am.

Another thing that really pisses me off about cyclists is they don’t obey all the traffic laws. If you’re riding in the middle of the street, you really should stop at stop signs. Cars do. I don’t get that. Now I don’t want anyone calling me a hypocrite, so I will admit to rolling through stop signs when there’s no other cars at the other stop signs in the intersection. I drive drunk, too. In fact I usually have a beer along for the ride quite regularly. What cops don’t know can’t hurt ‘em. But when I’m stopped at a stop sign and a dude on a bike comes cruising through the intersection, that ruffles this bird’s feathers. That’s one of the ways cyclists get hit by cars. The reason there are stop signs is because no one can tell what’s coming from around the corner. So, go ahead and stop. I know late at night you might think no one is coming, but you never fucking know. It’s for your own good to do it. If I hit a dude on a bike with my car, I’m not the one who’s getting hurt. Just trying to help here. I will hand it to some cyclists who stop at lights and wait. But it’s probably just ‘cause they’re afraid of a cop seeing them run the light. And if they do run the light, do they get a ticket in the mail? How’s that work? These motherfuckers want motorists to share the road, but then they don’t observe traffic laws. Unbelievable. Well, I guess I pissed enough people off already. So I’ll stop in a minute.

I don’t want people to stop riding bikes. I just want people to start pulling their heads out of their asses. I usually ride my bike on the sidewalk. That eliminates a lot of problems. That’s why sidewalks exist. I guess I’m a big nerd. Now, I know you run the risk of getting hit by someone pulling out of a driveway or parking lot. So maybe when you’re approaching a parking lot, slow down and see if anyone is coming in or out of it. Just look around. And as far as driveways go, most people don’t floor it to get out of their driveway. They usually ease out of it. They’re slowly pulling out, so maybe you should slowly approach the driveway. Yes, some people do fly right into their own driveways. I guess they’re in a hurry to get inside and watch their reality TV show and eat leftovers. Whatever. Just never stop looking. I do notice that a lot of cyclists keep their head in a locked position: forward. Maybe here and there you could turn your head a little. I do it. It’s for the better. Leave most of the street for cars, and everything will be alright. You don’t see people walking down the middle of the street, do you? Well there are a few. But they’re crazy. So let’s just try to work together on this one. I think it’ll be for the better. Cyclists and motorists both. You can call me an asshole if you want. I don’t care. Oh, use a headlamp and wear bright colors. It helps if we can see you. Especially at night. I know bright colors aren’t real cool, unless you’re in Portland, Oregon. But being dead isn’t real cool either, unless you’re into that sort of thing.