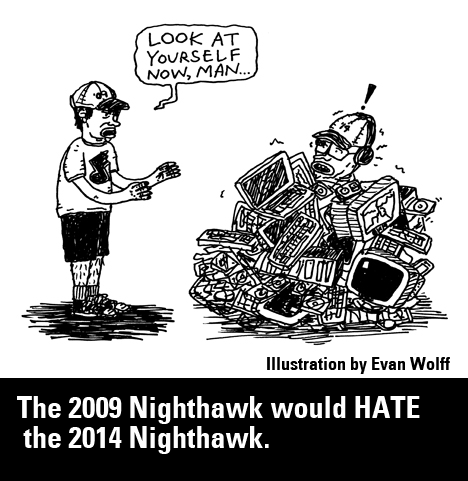 In Dudes Magazine issue fifteen, I wrote a column titled “Technology Sucks.” It was written in 2009. I complained about texting, camera phones, people moving away from making phone calls, accessing your email on your cell phone, iPhone apps, computers, and social networking, among other things. Well, times have changed, and so has my tune. Five years is a long time. Things happen.

I still think a lot of people are out of control with their use of technology, but I have learned to embrace the basic concept of it in moderation. Recently, I have come into possession of several items which have ushered me into 2014. I am caught up with the rest of the world.

I’ve never had my own computer. I was born in 1981. It was around 1995 when my parents got a computer with the internet. Before that, I remember a Commodore 64 on the dining room table. We played Q*bert on it. Around the time I got my second apartment, my Dad got a laptop from someone. He gave it to me. I had it for a little while, but then decided to give it back. My youngest brother swooped on it. I regretted giving it back. I didn’t think I needed it. I was wrong. It didn’t have the internet, but I used it for writing.

A few years later, I moved in with a couple of guys who didn’t have computers either. My parents had an old PC in their basement. I think it was my younger brother’s old computer. He didn’t need it anymore. Anyway, I hauled it over to our apartment. We had a very slow internet connection, but it worked for us. I took it with me to my next apartment. I was there from 2008 to 2012.

Sometime in there, my friend Nick gave me an iMac. The copyright on it is from 2000. He said his son didn’t want to play games on it anymore. He had other “screens,” as he calls them, to play on. He is seven years old now. I never had the internet hooked up on it, but did a lot of writing on it. People laugh when you tell them that you are using an iMac from 2000. Apparently, it’s fairly comical.

Earlier this year, my friend Jennie gave me her old laptop. My older brother is kind of a computer whiz. I gave it to him. He put all of her old documents and pictures on a disc for her, cleaned up the hard drive, and installed some fancy shit on there for me. I went to his apartment one night, and he gave me a quick lesson on it. I gave him and his girlfriend a gift card to a local grocery store for his hard work. I surf the web and everything on it. This column was written on that laptop.

Thank you, all parties involved.

For my last birthday, my parents gave me two things. St. Louis Cardinals floor mats for my new car and a SanDisk Sansa Clip+. It’s an MP3 Player. My computer whiz brother had recently got one. It’s equivalent to the iPod, but costs less. I had been thinking about getting an iPod for a little while. I can only listen to my CDs so many times, and I get burned out on the radio after a while. When I went and picked up the laptop, he showed me how to download music online and put it on the player. It’s pretty cool driving around town in my car, listening to MP3s.

My first cell phone was my youngest brother’s old phone. I was about twenty-five years old. My Mom gave him a new phone for Christmas, and added me to their family plan.

In May of this year, my younger brother gave me his old iPhone 4. No more flip phone for me! About a year after he got it, his job gave him a work phone. He only paid fifty dollars for the iPhone. When he was at the store looking at phones, the salesman he was talking to sold him his own phone. The phone dude had either just gotten a new phone, or was about to. And I’m guessing he got the 4 at a discount, or for free. Why would he sell it to my brother for fifty dollars?

I had talked about upgrading for a while, but wasn’t in a big hurry. My brother just needed to transfer his pictures off the phone. Once he did that, I had an iPhone. I slipped him fifty bucks and the rest is history. I pay an extra thirty dollars a month for unlimited data, but whatever. It’s worth it. I can access both of my Facebook accounts on the phone. Yes, I have two accounts. Dudes Magazine and Nighthawk Nighthawk. Check them out! One of my bookmarks is the Major League Baseball standings. I don’t have to ask someone to look something up anymore on www.Dad.com. It’s nice. I even take pictures on it! I guess I won’t be needing my parents’ old digital camera that my Mom gave me a few months back.

You’re all familiar with the iPhone, so I will stop.

I’ve had things handed down and up, yes up, to me for years. It’s nothing new. Just the technology part of it is. The first car I drove that my parents didn’t own was my younger brother’s. I was nineteen. He was seventeen, and already had two vehicles. My Dad made him hand over the keys to his 1971 Dodge Dart Swinger. It was pretty awesome. I only drove it for a few months before the carburetor went out.

People say this kind of thing all the time, but the 2009 Nighthawk would HATE the 2014 Nighthawk. As many have said before me, “We become what we hate.”