I never was able to see the Mr. T Experience when I was younger, and I never thought that I would. I was so insanely pumped when I heard that they were going to play the Troubadour in Los Angeles. I was going at any cost. They fucking killed! I screamed every single word along with Dr. Frank. I assumed this was a one-time show, and I’ve never been so happy about being wrong when I found out that they were playing my town, San Diego.

Oh, but wait—not just the amazing MTX, but also The Queers and Screeching Weasel! Fuck me. It was a Sunday night and MTX hit the stage pretty early. I left my drink at the bar area and ran down to the front of the stage. I can have a shitty overpriced beer anywhere. I can’t hear the MTX crew rip apart my heart and sew it back together live very often. Two times in life isn’t nearly enough.

Again, it was another throat-killing show as they played a ton of songs that if you don’t know, then you’re missing out. Start buying everything you can get your hands on… and yes, also the novels that Dr. Frank writes. Between “Swallow Everything,” “Ba Ba Ba Ba Ba,” “Thank You,” and “Danny Partridge,” I couldn’t have been more excited about the set list. I’m pretty sure that I’ve finally figured out what Dr. Frank’s Ph.D. must be in, and it’s heart surgery. The man knows what makes it break, tear, rip, and tick. The melodic ring of Mr. T Experience is nothing to be missed.

First come love, then comes The Queers! The lineup was insane. Dangerous Dave, Chris Fields, Bear, Patrick, and Joe Queer with no guitar?! Super cool and fun, ripping all of my favorites like, “You’re Trippin’” and “Wimpy.” A couple of songs in, I wondered, “What the hell is wrong with Dave?” He just didn’t seem like himself. He was just plain ornery. He stumbled and made belligerent moves all over the place. Too much booze, I suspected. At one point, Chris gave him what I imagined to be a warning. Not much longer after that, right at the end of “I Hate Everything,” a few slaps of the cymbal with the bass, a shove into Chris, and that did it. Dave crossed a line and Chris tackled him. He obviously had enough. 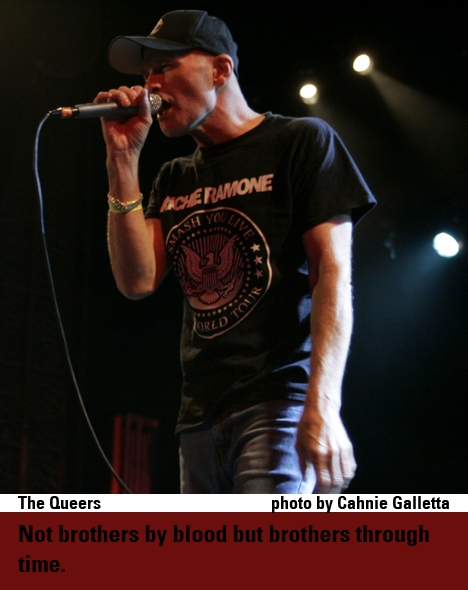 It was kind of like watching two brothers go at it. (Which, in a way, that is exactly what it was. Not brothers by blood but brothers through time.) Dave was escorted off the stage,  and after an apology by Joe, we were once again immersed in The Queers’ “Granola Head.”  I thought for sure Joe would pick up a guitar at that point, but I am so glad he didn’t. Joe killed it as a front man. The amount of energy Joe was giving off was electric. I have never been told to fuck off so many times and loved every finger of it. The lineup was backing up Joe with an incredibly fast and tight sound.  I try to never miss The Queers when they’re here. No matter how many times I’ve seen them with different lineups, they’re one of the funnest bands to see.

In the past I have driven miles to see Screeching Weasel. Music from the most recent album, Baby Fat Act 1, filled the empty stage. I wondered if they would perform rock opera-style, as the album is. Was I about to witness punk history? I felt the anticipation of the crowd.  I am a complete drama nerd so I started getting excited that theatrics were headed my way. So we wait… and we wait… 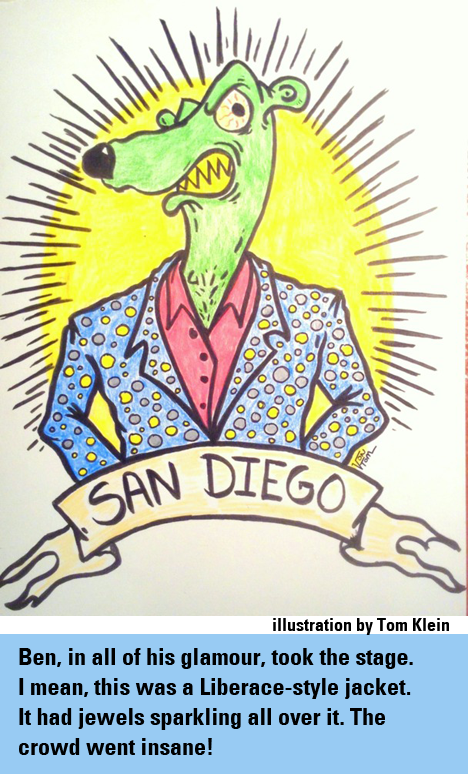 Then, Ben, in all of his glamour, took the stage. I mean, this was a Liberace-style jacket. It had jewels sparkling all over it. As soon as he grabbed the mic, they went into “I’m Gonna Strangle You.” The crowd went insane! The band continuously rocked old songs: “My Right” and “Hey Suburbia.”  The guitar was ripping, the beats were hard, and his vocals were as if he had never aged a day.

If I closed my eyes, it was like it was 1991. “My brain hurts my brain hurts.” Aahh, my throat hurts from screaming! At first, the band snuck in an occasional tune off the new record, and about half way through the set, I wondered if he was dying to play the new stuff.

So Ben was kind enough to ask the crowd if we minded. The lackluster response prompted only two songs—“So Long Mojo” and “Things Aren’t So Bad”—that were really good and sounded like great Screeching Weasel songs. Shortly after that, we jumped up and down to some more old school tunes like “Veronica Hates Me.” (I realize this is not an album review, but I digress. When Baby Fat Act 1 came out, it was scary to think it was a punk rock opera. I love Meatloaf but punk? At first spin, it was great! To my surprise, it really is just a kickass Screeching Weasel album that has a story throughout.) It’s always hard hearing new stuff because most of us don’t know it and we really want to mouth the words and sing along, but, overall, it was played super tight and sounded amazing.

There always has to be a wise guy, right? This show is no exception. Some “punks” in the crowd were throwing stuff at Ben. I think he held it together pretty well for a while, but he said something. After a serious tongue-lashing from Ben, they were escorted out. My favorite part about this moment was the girl next to me who turned to me and said, “C’mon isn’t his reputation tarnished enough?” What? Isn’t this the Ben Weasel we all know him to be? I’m not sure why she was surprised.  I was surprised it took him as long as it did to say something. I’ve seen Screeching Weasel three times. Two times he’s commented on something going on in the pit. (Maybe he was just tired the first time I saw him.) This was a spectacular performance by Screeching Weasel. I can’t forget to tell you about when Joe Queer dawned “the jacket” and sung “Cindy’s on Methadone.”  So much fun!

I was really excited about this show and it really delivered more than I could’ve asked for. Seeing these three bands was reminiscent of being reunited with friends after years; we picked up right where we left off. I couldn’t help but be reminded of my old scene and all the people in it. Some of those people and places aren’t with us anymore. The feeling I got that night made me remember that just like an amazing punk rock song, memories and life can be short, fun, sad, and over in a blink of an eye. “Seasons will change, and so will you…”