David Blancas, lead muralist for San Anto’s latest public art display, speaks about how honored he felt to be a part of this project, saying everyone who helped took a leading role in realizing Castillo’s dream.

For Manuel “Manny” Diosdado Castillo, a Texas-native who grew up on the West Side of San Antonio, his passion for community work and his love for music have been running parallel since day one. Today, Castillo rests peacefully in the arms of God as he lost his battle with cancer earlier this year.

Castillo, executive director of the San Anto Cultural Arts Center and drummer for Snowbyrd (a San Antonio-based alt-country/indie-punk band) led a fulfilling life when it came to giving back to his community through multi-art mediums and music. Taking a look back on the roads this musical catalyst/community activist traveled, it is obvious that he left a legacy behind.

It all started when Castillo returned to San Antonio in the late ‘80s after taking some college courses in Austin and New Orleans. He found himself working at a non-profit organization called Inner City Development on the city’s West Side under the direction of former San Antonio Councilwoman Patti Radle.

“I was her assistant doing grunt work and learning all about community organizing,” said Castillo in a 2007 interview with La Prensa, a local community newspaper. “At that point, I hadn’t done anything in terms of work anywhere else other than warehouse and labor jobs. At the same time, when I came back from school, I had two goals in mind…to do community work and to play music.” 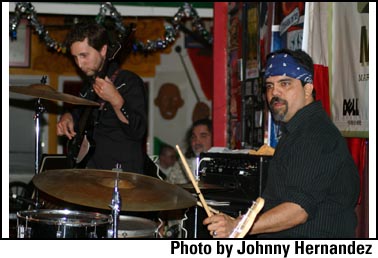 Around the time Castillo began absorbing the responsibilities of community organizing, a small live music dive lured him into a world of music in which he would soon lay a strong foundation.

“When I started hanging out at Taco Land, I met Marshall Gause and we somehow started a band, naming it El Santo, after the wrestler,” Castillo told La Prensa. “At the same time, I started doing a lot of work at food pantries, clothing pantries, and organizing youth recreational leagues. I even started some stuff on my own.”

Castillo found his plate rather full with El Santo gigs, working a night job at UPS, going back to school to finish his degree, and working at Inner City Development. None of this, however, ever bogged Castillo down. Instead, he pressed forward to reach his goals.

In 1993, Castillo met a San Antonio artist by the name of Juan Miguel Ramos, who was drumming for an S.A./Austin-based band called Glorium at that time. El Santo and Glorium immediately formed a tight union and launched a national, two-month tour that summer.

“At some point, in the middle of our tour, I got this idea that I wanted to start some sort of cultural arts program at Inner City,” Castillo recalled. “There really wasn’t anything at the center back then except for some sports and job training.” 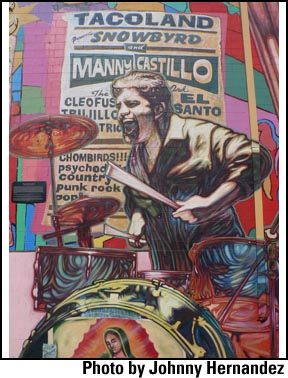 One particular art form Castillo had in mind to teach members of the community and local youth was public art, particularly murals. He had learned that Ramos was an artist attending The University of Texas at San Antonio (UTSA) and mentioned to him that he had an idea to create such a program. Ramos thought it was a great idea, having taken some mural classes himself. Castillo then met another local artist named Tony “Cruz” Ortiz who simply loved the idea.

When the touring bands returned to the smoky interior and beer-soaked exterior of an S.A. dive called Taco Land for a welcome back performance, Castillo met with Ortiz to talk about his mural program idea. At that time, not only was Castillo working at Inner City, but living there as well. After getting to know each other, Ortiz moved in and soon there was a think tank of artists and organizers living under one roof.

Through a series of fundraisers at Taco Land and UTSA, the San Anto Cultural Arts Center was created and successfully developed the Community Mural Program, launching its first public art display in less than a year. The mural program was pretty much the catalyst for San Anto Cultural Arts. With Ortiz and Ramos, Castillo continued to create more multi-media avenues, stretching them throughout the West Side community.

Halfway through production of their first mural, San Anto Cultural Arts raised enough funds to produce El Placazo, which is a monthly newspaper operated by community youth and designed to educate those who are interested in learning about newspaper production.

They later formed a multi-media program called the San Anto Cultural Arts Video Oral History and Documentary Program. It is designed for middle school and high school-aged kids who participate in a seven-week program, learning everything from video shooting, editing and lighting to the history of Latino films.

In 1997, The San Anto Cultural Arts Center was granted non-profit status. All the while, Castillo continued drumming, moving forward with local bands like El Santo, The Cleofus Trujillo Trio, The River City Playboys and, of course, Snowbyrd.

With the Lutz brothers, Chris and Scott, and the many different bassists the band has employed throughout the years, Snowbyrd has definitely made a lasting dent in the San Antonio music scene. They have toured the country and have made a few appearances at South by Southwest and North by Northeast music conferences, as well as a notable write-up in Texas Monthly magazine and several awards.

Castillo and Chris, lead vocalist/guitarist for Snowbyrd, embarked on what they automatically knew would be a longtime, musical relationship when they formed Cleofus in 1992.

“Manny and I met in 1992 at Taco Land, a legendary cow-punk bar in San Antonio,” said Chris. “He was in El Santo and I was in the Dropouts when we formed Cleofus Trujillo Trio (a power trio in the spirit of Cream-ala-Blue Cheer meets The Beatles-ala-Budgie) with a guy named Saul Zetuche. The thing that really brought us together was Lone Star, Thin Lizzy albums, and a love for turning everything up to a combination of white noise and experimental country jazz. We morphed into The River City Playboys, Scott joined us, added the steel guitar and harmonies…the rest is history.”

Busy behind the wheel as the driving force of San Anto Cultural Arts, Castillo always found time to network with the arts and music community through Snowbyrd, even if he was often burning the candle at both ends.

“I often wondered how he could pull off the after party, dancing every night, making the scene, and still make it to the board meetings and grant proposals with heads of state,” said Scott. “It wasn’t that he led two lives, but I think he did burn the candle pretty hot. I don’t know how he fit everything in, but whether at a formal function or on stage at some dive, he kept one demeanor and always made a point to represent himself with class and dignity. In a lot of ways, though, he was just out networking. His job was his life and it didn’t stop when he left the office.”

When Castillo fell ill, hospitalized with an incurable disease, the band didn’t quite know what to do. They canceled their trip to 2009’s SXSW and slowed down production on their latest release, Diosdado. Chris remembered Castillo once jokingly say, “If you guys stop playing and wait for me to get better, you’re only going to get worse.” It was just a few months later that the band lost their drummer and longtime friend.

“It’s still hard just to come to grips with it all,” admitted Scott. “From the day he found out that there was really a problem to his last day here, it was just less than three months…no one was prepared. For most of that short time, we thought that his treatment would be effective and he would be back drumming like nothing ever happened.”

Snowbyrd was recently honored by the San Antonio Current reader’s poll as the “Indie Band of the Year” and the band really wished Manny could have been here for that.

San Anto Cultural Arts recently celebrated its twelfth anniversary, marking twelve years of dedicated service to the San Antonio community, and like Snowbyrd, the non-profit organization has pressed forward through the loss of their executive director with 37 murals (and counting) erected on the city’s West Side.

“Manny’s birthday is November 23, so we purposely decided that if this mural was going to be blessed in the fall we might as well do it in honor of his birthday,” said Heather Eichling, current executive director for San Anto Cultural Arts. “This is a great way to celebrate his life.”

At about 150 feet in length and 18 ½ feet tall on a wall belonging to a Fast Action Bail Bonds office right off the West Commerce Street overpass, “La Musica de San Anto” is the cultural arts center’s largest mural to date and the last mural erected by Castillo—now immortalized in the center of it all.

When asked to say a few words at the mural blessing and unveiling ceremony, Ramos paused for a moment to reflect on how wonderful the representations of all the musicians will stand on that wall for future generations to come, thanks to Castillo.

“What you have here are people who care about the history of their own community, preserving it and passing it on,” said Ramos. “You have to take ownership of your history and share it because if you don’t preserve your own history nobody else is going to do it for you. I’m really happy to know that this is going to be here for a long time.”

When it comes to public art like this that exhibits multimedia details like paint, lighting, tiling, sculpture, etc., murals serve to beautify the community, resurrecting a wall that was dead with neglect. That’s what Castillo did, leaving behind a legacy of 37 murals to educated the community.

“These murals don’t belong to the artists,” said lead muralist David Blancas. “They belong to the community and the city as a whole.”

As the charismatic, rambunctious drummer for Snowbyrd, who some would refer to as the Mexican Keith Moon, and the determined, confident executive director of San Anto Cultural Arts, Castillo’s passions truly were music, art, and community involvement, not necessarily in any particular order.

Johnny Hernandez writes for both the Examiner and La Prensa Newspaper.