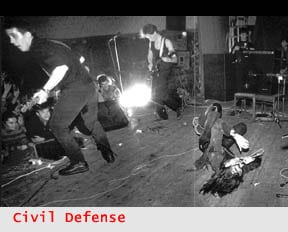 The Russian punk scene, which produced several remarkable bands back in the late 1980s, is sliding down towards mainstream rock. The Russian show business, which has matured in the ten years of capitalism, is co-opting whatever can be sold to mass audiences, while there is no independent label/distro/promotion system, and many talented bands rarely get exposed to audiences they deserve. Today's youth believe Russian clones of the Offspring or Green Day to be "true" punk, while bands not played by FM radio or shown on national music TV play for a few dozen fans, rarely going on tours or putting out releases.

Overall, punk in Russia dates back to the late 1970s/ early 1980s, but the scene did not take off until the mid-1980. Living behind the iron curtain made it almost impossible to get punk records in the Soviet Union. While mainstream pop and rock records were brought into the country, both legally and illegally, punk rock remained a myth rather than a music genre for a few years.

There was, maybe, one exception. Andrei Panov, aka Swin (Swine), was probably punk even before he first heard the Sex Pistols, playing an occasional semi-legitimate gig with his Avtomaticheskiye Udovletvoritely (Automatic Satisfiers) in his native St. Petersburg or Moscow, but he was punk more by attitude than by the music he played, which was eclectic and incorporated anything from punk to mainstream pop music. As Russians got exposed to more foreign music around the mid-1980s, when political reforms started and people could travel more freely in and out of the country, more and more youths heard about punk, which was still portrayed by the official press as a disease of the "decaying West." Punk bands began to be formed all around the former Soviet Union, primarily in Moscow, St. Petersburg and Siberia. Some of those "punks" understood the genre quite freely, having listened to just a few records, but the overall impact of the 1980s punk scene was immense. 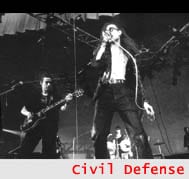 Meanwhile, rock music at large, which was suppressed under the previous regimes, was beginning to see some official recognition and some punk rockers jumped the bandwagon, getting an opportunity to play legitimate gigs and even get paid for them. However, around 1986-1987 the KGB was watching the punk movement closely and prosecuted Yegor Letov, lead singer and song writer for Grazhdanskaya Oborona (Civil Defense), based in a Siberian city of Omsk. The band which, in addition to the sin of playing "degenerate" punk rock, had a very strong anti-Communist stance. After spending some time under compulsory care at a mental institution and being on the run for a few months, in the mid 1980s Letov came up with what still remains the best punk rock ever made in Russia.