Rubbing Barbecue Sauce on Your Testicles: An Interview with the Lipstick Pickups

The Lipstick Pickups are slowly but surely becoming everyone's favorite band to have a crush on. Their "we-don't-give-a-fuck" attitude stokes the flames even more! Maximum Rock N Roll included the band's split 7" with the Bikini Bumps in their "Top Ten of 2002" list and overplayed the record on their radio shows, as did many other independent radio stations. Anyone who's heard their recordings can't get enough. Seeing them live leaves the crowd in complete and utter awe. What is it about these kids that make them so infectious? Is it the hotties screaming the high-pitched vocals? The handsome guy behind the kit? We're not sure, so we asked the band a few questions to try and figure out what makes them tick, so maybe you can come up with your own conclusion about how it is that their cult following just keeps growing! Mind you, this interview took place right after the band was hounded down by some guy wanting them to autograph his copy of their split 7".

Shahab: What are all your names and what do you do in the band?
Erin: Erin, guitar!
Vanessa: Vanessa, bass!
Tracy: Tracy, and I rock out! [laughter]
Kevin: Kevin, I play drums!
Shahab: How was your recent nationwide tour and how did it differ from previous tours?
Tracy: It was longer and I didn't have to go back to work for a longer period of time.
Vanessa: The shows were consistently better, too.
Erin: It was fun!
Vanessa: I had never seen probably half of the places that we went to, so that was exciting.
Erin: Yes!
Vanessa: I feel very worldly now.
Kevin: The tour ruled my world. It was the best thing I've ever done in my whole life. It was different then previous tours 'cause it seemed successful. We sold records, had crowds at the shows, and came back better friends.
Shahab: Give us the funniest tour memory you have.
Erin: When Vanessa fell in the river!
Vanessa: [laughter] I was trying to save Lee's (friend of the band) life. That's what I get for being an aspiring heroic.
Tracy: You fell in the fish guts and no one wanted to ride with you...
Vanessa: In Iowa!
Tracy: Idaho...
Vanessa: What? Yeah, and then I had to go into a Chili's restaurant to change and everyone was staring at me all weird 'cause I walked in soaking wet with a bag of clothes and then walked back out again!
Kevin: I don't know about the funniest but the funnest was jumping off the rope swing over and over into Suck Creek in Chattanooga, Tennessee. It was heaven to Kid Kevin. Funniest? I don't know, I think probably getting naked and spreading barbeque sauce on myself.
Tracy: On your genitalia!
Kevin: I don't think I can beat that!
Tracy: Not a very comfortable condiment.
Kevin: Yeah, that was fun.
Vanessa: That extra zest that's in barbeque sauce versus ketchup; it's got a kick to it!
Tracy: Yeah, right here! [laughter] 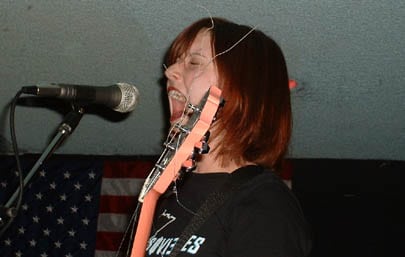 Shahab: Did you expect your split 7" with the Bikini Bumps to do so well? And don't be modest!
Erin: We hoped so! We hoped it would do that well.
Kevin: I personally had no clue it would do that good. I just wanted to put out music and we did. All that stuff was flattering.
Vanessa: That record to me, personally - there wasn't a thought as to how it would be received to the world. It was just so gratifying to do that.
Shahab: What have you done since the release of that 7"?
Erin: Another 7" and a 12"...
Vanessa: And the GC comps!
Kevin: We've done a 7" on Kapow, a 12" EP on Radio Beat, the 6 band comp and You Call This Music?! comp on GC, and a song on the Let's Get Rid of LA comp. We did a U.S. tour and are going to tour a week in January.
Vanessa: Yeah, just kickin' back?
Shahab: So, explain to the readers what exactly "Let's Get Rid of LA" means.
Vanessa: Just buy the record. There are plenty of liner notes that go into what the meaning is! I think it differs from whomever you ask.
Kevin: You know, I differ from most everybody involved with that comp. I think the comp was a good snapshot for a moment in time, but personally, LA sucks. I hate all the lame bars.
Shahab: Bands Against Bush: a good thing or a bad thing?
Kevin: Anything against Bush is a good thing, I think. That's what I say. [short pause]
Shahab: What are your future plans?
Erin: To dominate the world!
Vanessa: To be put in the ring with The Donnas. No, no beef with The Donnas.
Kevin: Hey! Nobody else answered the Bush question!
Shahab: Are you getting tired of The Donnas comparison?
Vanessa: Yeah, very much so!
Tracy: We get that?
Vanessa: Yeah.
Tracy: Oh, I don't pay attention very much?
Shahab: Is it hard having Kevin, who also tours with his band Killer Dreamer, and Vanessa, who is constantly on the road with The Starvations, in terms of shows and the music writing process?
Tracy: Sometimes I feel like an orphan... a little lost puppy out in the cold of the winter. [laughter]
Kevin: I feel bad leaving, but I'm a good guy. [laughter]
Vanessa: Kevin and I have other qualities that make up for it!
Kevin: It becomes hard because I am trying to give a a hundred percent to both bands, a hundred percent of the time and that isn't possible all of time. It sucks to put one thing on hold while the other is on tour. But I love both so much so it ain't a problem. It makes it hard with me and Vanessa leaving at different times, but I think we got it working out.
Tracy: [To Kevin] As long as you keep coming with avocados and [to Vanessa] you keep coming with earrings, you're alright! [laughter] Otherwise, you're fucking out!
Kevin: I will never give less effort to the Pickups. Never. 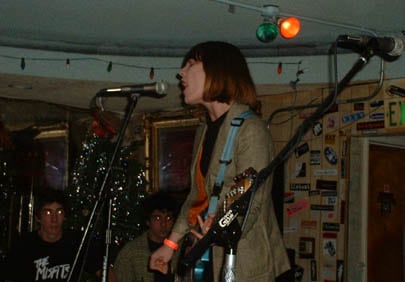 Shahab: What is your favorite record of 2003?
Tracy: Oooh! I know! I know! Justified.
Erin: Is that Justin Timberlake?
Tracy: I l-o-v-e, love it! I don't care what you say. We can take this outside if you want, but I looooooove it! [laughter] Nah, it's probably not my favorite, but...
Erin: What have I bought this year?
Kevin: Fleshies, The Sicilian.
Erin: Oh, I love that!
Kevin: That shit is heavy!
Erin: And Beyonce is up there.
Vanessa: The Black Lips new album. I don't know what it's called but I haven't taken it off...
Erin: Oh, The Spits! The new Spits LP, I think.
Kevin: Yes, The Spits! The Spits are very good!
Shahab: Garage-punk: is it a fad, or is it here to stay?
Tracy: It's here to stay every four years or so. [laughter] It goes in shifts.
Vanessa: It's definitely the best alternative to the rap-rock, whatever it's called... The nu-metal: n-u.
Kevin: I don't even know what garage punk means, but I kind of do. I'm sure the stuff on the radio and the popularity of it is a fad and will die out and come back 25 years from now again. It's just all cycles.
Shahab: The Strokes or the White Stripes?
Vanessa: Oh, my god!
Tracy: The White Stripes. I don't care what you fuckin' hipster fags say, they're alright!
Vanessa: For sure.
Erin: Yeah, the White Stripes.
Kevin: White Stripes. Fuck those other dorks.
Shahab: Dashboard Confessional or Against Me?
Erin: I don't know Against Me, but I know that Dashboard Confessional is really annoying.
Kevin: They played at our school and it sucked!
Tracy: I don't know who Against Me is.
Vanessa: Are they similar?
Shahab: No! Against Me is so good!
Tracy: We pick them then. [laughter]
Shahab: That's it! Thank you!
The girls: Dun-dun-dun!!