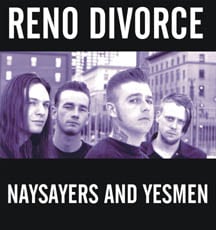 Rollin' the Dice with Reno Divorce: An Inebriated Interrogation By Roger Moser Jr.

Reno Divorce are one of those bands that sonically slice straight through the jugular and then firmly implant themselves into the bloodstream like an unwavering addiction. Their rough'n'ready brand of rock'n'roll abrasion is as gritty, greasy, and down-and-dirty as it gets. Take a huge overflowing barrel full of diesel fuel, toss several liters of liquor into it, douse it with a stiff dose of sin and decadence, and then add an overwhelming whirlwind of amplified liveliness. There ya have the unruly rock'n'roll roar of Reno Divorce in all of their liver-picklin' glory. Ladies and gentlemutts, I now take supreme pleasure in presenting to you the undisputed, hell-raisin' big daddies of over-amped musical madness: Reno motherfuckin' Divorce!

Roger: Please allow me to introduce yourselves; resolutely state your names (including jailbird aliases), your musical/instrumental fields of expertise (guitar, bass, empty wine jug, ragged old washboard, etc.), and your everyday grueling occupational habits (regular daytime jobs, that is).
Brent Loveday: Vocals/lead guitar. FedEx slave.
Tony Owens: Guitar. Tire installer.
Seth Evans: Bass/hack, vocals. Overnight overlord of Kmart.
Andrew Erich: Drums. Office bitch.
Roger: I now drunkenly implore you to inform the inquisitive Razorcake readership about Reno Divorce's illustrious hell-raisin' history to date. All the pertinent details, fellas! When and where did the band form? Just how many beers ago was that?
Brent: Reno Divorce was formed in an Orange County (Florida that is) subdivision in 1989 by Tony and me. He had this fucked-up Epiphone copy Paul McCartney bass and was the only other kid in the neighborhood with a stringed instrument.
Tony: It wasn't even an Epiphone. It didn't even have a name!
Brent: We recorded Black Flag's version of "Louie, Louie" on a 4-track with a drum machine at this old butt-rocker's home studio. We then proceeded to play it for every chick in the neighborhood. We officially started Reno Divorce many beers and years later. We played in Orlando for about two years and released the Web of Lies EP and the All Throttle, No Bottle 7" (Skankin' Skull Records). I moved to California.
Tony: I knocked some chick up in Denver and went there to try and do the right thing!
Brent: I guess the planets were aligned, because my son moved to Denver as well, so my wife and I came here, and we re-formed the band.
Seth: I just woke up and they were at my house. They won't leave. Help me.
Andrew: They had some other drummer, and I had an ad on denvermusician.com. They were looking to get a new drummer, and they answered my ad. My influences were all the same shit that Brent liked, so he got in touch with me, and we met at a Denny's. After I met them, they called my house about ten billion times and, well, here I am.
Tony: Brent went on vacation and called me every ten minutes, "Did you call him?" "Yeah." "Call him again!" Two months later, we made a record.
Seth: Help!
Andrew: Then we did our first tour with the Pavers (Scott Reynolds, ex-ALL singer) and ended up becoming friends with them.
Brent: After much harassment and threats, Boss Tuneage Records decided to take a chance on us.

Roger: It's blatantly obvious ol' reckless Mike Ness and his socially distorted sidekicks profoundly influenced Reno Divorce to rambunctiously unleash an ear-twistin' smattering of sonic sinfulness. But who else indelibly inspired you to robustly grab the proverbial rock'n'roll bull by its horns and raucously crank it up a notch or two?
Brent: Just about any punk music in Southern California in the early to mid '80s. I just connected with that shit. I was born in Knoxville, so country music is also a deep influence, as well.
Seth: Bluegrass, sugar-pop punk rock, pretty much everything that the other guys don't like.
Tony: As far as someone making me want to get up on stage and play guitar, probably Dennis Dannel (Social Distortion guitarist. RIP).
Andrew: Older bands like Black Flag, Descendents/ALL, Ramones and newer bands, like Zeke, Turbonegro, and the Backyard Babies.
Brent: As far as the Social Distortion influence, they were the first band Tony and I ever saw live when we were thirteen. It leaves an impression, I guess. It's not like we were surrounded by positive role models. Great minds think alike, I guess. If more bands were influenced by Social D., you might be able to listen to the radio.
Roger: Since we're certainly boisterous sinners amongst men, what is your favorite form of unadulterated hedonistic debauchery: booze, broads, or billiards? And the reason being?
Tony: Girlies. 'Cause I don't drink and I'm a shitty pool player.
Seth: Broads ain't nothin' but sluts, and billiards are boring, so I guess it's booze. And Frodo.
Andrew: My girl. I'm pretty fucking boring for a rock'n'roller.
Brent: Broads, but I have to live vicariously… through Tony.
Roger: Any naughty, tabloid-style VH1 Behind The Music moments you'd like to boastfully divulge? Crazed groupie encounters, vomit-saturated drunken orgies, decadent near-fatal drug consumption, taboo sexual liaisons with the family pet, bottle-tossin' fist-flyin' bickering amongst the band members, etc.? Intoxicated inquiring minds want to know. 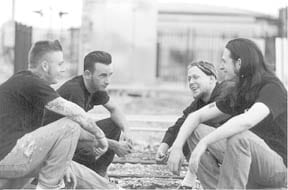 Andrew: One time, on tour, Seth showed his tits to a truck driver. That was pretty wild, man.
Brent: Seth threw beer on Stephen from ALL's wife, "accidentally." (Sorry, Nat!) We drove all night to Chicago (for a half-hour set) after a gig in Colorado Springs and decided it would be a good idea to snort Ritalin to keep us up. We'd read somewhere it's just a molecule off from being cocaine. Evidently, it was the "taste" molecule.

Andrew: Then there was Brent's "soma coma." He kept saying to us, "I love you guys! You're some solid motherfuckers!"
Seth: One time, I fucked up a dude's sound board, 'cause he said I sucked.
Brent: Passive aggressive.
Seth: And one time I firebombed a club.
Roger: What's the sappiest, most disgusting stomach-churning song that's ever mercilessly violated your auditory senses? For me, it's definitely a torturous toss-up between anything by the despicable, loathsome likes of Elton John, Billy Joel, The Eagles, The Doobie Brothers, and Bob Seger. May Satan fiercely defecate on 'em all in the eternal hereafter! Gawd, how I fervently hate that bland, boring FM pap-smear rock from the 1970s!
Andrew: What the fuck is that "Seasons in the Sun" song? Fuck that fucking song! Makes me fucking suicidal.
Tony: Hold on, let me turn on the radio - this'll just take a sec . . . there we go, System of a Down! I didn't think I could hate a band more than Korn, but in comparison, I'm beginning to think Korn had some kind of talent.
Seth: "California Dreamin'" and anything by Sonny and Cher.
Brent: "This Is How You Remind Me." What the FUCK?!
Roger: What are your loudly outspoken opinions about the current cluster-fuck state of affairs regarding the continuous war-on-terrorism saga, the Catholic priest molestation craziness (hell, those sick bastards are fornicating more furiously than I could've ever imagined doing so myself!), and Enron's shameless greed-based corporate tackiness? It's certainly a frivolous media-circus feeding frenzy, and I, for one, am sick to death of it all. I just wanna drink another beer, heartily unleash an atomic belch, and hope that it somehow benefits my fellow man (especially the tree-huggin' hippy-rodent political activist do-gooders who are just as repulsive and annoying as their surrogate-daddy governmental opponents that they so vehemently protest against). Amen, and I will now drunkenly saunter away from the pulpit.
Seth: I'm a commie. I don't care! I don't give a fuck just as long as Cuba is around.
Andrew: The terrorist thing is fucked-up. Other countries have to deal with it 24/7, and it's somewhat of a new reality in the US. It's a wake-up call, in a way, that we need to watch the other person a bit more and not get all fat and happy with the remote control while some motherfucker hides in the bushes, getting ready to take us out. Fuck Enron. Who the fuck cares? Nice publicity stunt. See you in Playboy!
Tony: It's all bullshit. I know a few guys in my neighborhood, give 'em a gun, send 'em over there, and they'll get that fuck Bin Laden - and the U.S. government can't do it?
Brent: You can't have it so good for so long without being called out. You've got to flex every now and then. On those rapist priests, child molestation is fucked-up in its own right, but when you betray a trust like the one that exists between a clergyman and a kid and then the biggest organization in the world bends over backwards to cover it up, it's no wonder why shit like Marilyn Manson sells millions of records. It just goes to show everybody's crooked.
Roger: Here's an irrelevant, off-the-cuff question that just begs to be asked: Linda Lovelace, the esophagus-stretched ex-porn "actress," recently died due to injuries sustained in a car wreck. Do you think she's now diligently deep-throating St. Peter at Heaven's pearly gates to guarantee her eternal, everlasting passage into Paradise? Please do share your profound thoughts on this socially pertinent subject matter.
Seth: She went to hell because she disowned the greatest thing she's ever done.
Andrew: I think all porn stars go to heaven, except the ones in Seth's porn collection. They go to a very, very bad place.
Brent: No, the girls in Seth's collection HAVE to go to heaven for enduring the hell-on-earth that takes place in those flicks. She's (Lovelace) from Colorado, so we're down with her.
Tony: I don't practice any kind of organized religion, so I'm not going to judge her.
Roger: I've been told (more often than I care to admit) that I'm uglier, meaner, and nastier than a one-eyed, runt-tailed rattlesnake. So which one of those unflattering and dishonorable traits (ugly, mean, or nasty) adequately describes you, and why?
Seth: I'm too ugly for that girl to be my friend. I guess I'm more nasty than ugly, though.
Andrew: A little of each.
Brent: I guess I got a mean streak, but only towards my loved ones.
Tony: I don't know. I'm not the prettiest guy in the world, but I guess I can get mean if provoked. That's a question better suited to my ex-girlfriend.
Roger: Well, thank ya ever so kindly for patiently participating in this sorry excuse of an interview, you dastardly Reno Divorce scoundrels. I will now gregariously give you the once-in-a-lifetime opportunity to tell it like it is as you see fit. Grand future plans and shameful past indiscretions; the final word is all yours, fellas!
Brent: Next thing for us is we're going to Europe in October with our friends, the Pavers.
Tony: I'm celebrating my birthday in Amsterdam, and I'm hoping that the fellas are gonna chip in to get me a nice prostitute. I don't want to say "top shelf," but you know.
Andrew: Our record, Naysayers and Yesmen, will be out on Boss Tuneage Records on June 22nd. You can check us out online at http://www.renodivorceonline.com and tell me how bad I am at putting a site together. You can also check out http://www.bosstuneage.com/ for our label.