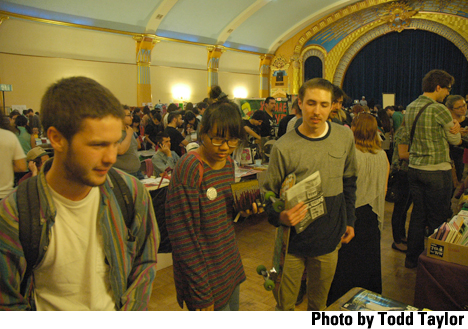 I woke up at an unlawful hour (9:45 am) for the second annual L.A. Zine Fest on  February 17. I had a hangover that had me consider introducing my head to the toilet for some serious purging. Instead, I shuffled off to my first-ever zine festival, not knowing what to expect.

I moved to Los Angeles from Vancouver, Canada in August 2012 for grad school, so I’m still getting used to finding my way around the city. I got off the metro and walked the wrong way for a good block-and-a-half before I finally turned around and found the UkrainianCulturalCenter. I entered the building and managed to get lost in the tiny lobby. This was going to be a long day. After forcing my few working brain cells to get some sense of direction, I found the Razorcake crew and plopped down at the table. I watched the hustle and bustle of the innovative zinesters showcasing their amazing art, and it didn’t take long for me to get re-energized by the hive of creativity.

The festival is held to promote zine culture and to create an open space of sharing and learning about DIY publication.

One of the best parts about the fest (other than the mad talent) was the crowd. People from all walks of life were going in and out of the building, making it a people-watcher’s (i.e. creeper’s) paradise.

There were friendly zinesters who just wanted to share their work with the world and snotty zinesters who made sure you knew they were better than you. I had a few conversations with the latter that consisted of me complimenting their work and them rolling their eyes, telling me that they hate how most people don’t even know how to make zines.

There were precious hipsters searching for the meaning of life in zines that were obscure enough to be trendy:
“This is so cool!”
“What is it?”
“I don’t know!”
“Cool!”

There were also seen-and-done-it-all sixty-plus-ers who were clearly the hippest grandparents in L.A.

Also in attendance were poseurs who dared to wear Clash T-shirts, yet looked at a Razorcake issue as if it was the Schrodinger equation, dudes with handlebar ‘staches and scraggly beards who looked like ZZ Top rejects (is there such a thing as a beard weave? Because that’s what they needed), and—my personal favourite—an Indian dude who was the spitting image of Jeff Goldblum. My parents are Indian, so seeing one of my people there (and one who looked like The Fly himself, no less) made me embarrassingly happy. 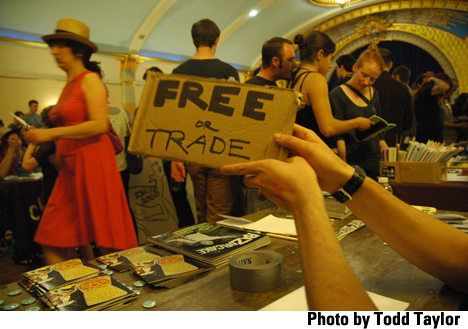 An unexpected and rather curious anthropological observation was the fact that people seem to hate free stuff. At the Razorcake table, there was a setup of free pins, stickers, CD compilations of Awesome Fest 666, and copies of the latest zine issue. Razorcake director Daryl had made a sign that said “Free or Trade,” which is obviously the most confusing thing ever for some people. We’d tell everyone who passed by that everything on the table was totally free, and in return we’d mostly get squinty looks, nod-and-smiles, or blatant rejection. A conversation I had with one of the fest-goers went like this:

People seemed to be legitimately offended when we offered them things for free. I, for one, found this to be pretty interesting, but also super odd. I’ve volunteered at numerous festivals and in my experience, the tables that people love to frequent are the ones with free shit. Hell, when I walked around to check out the talent, I asked virtually every table what they had for free. But what do I know—I’m Canadian. Even our healthcare is free. I guess things are different in America…? If you try giving away things for free here, people seem to think you’re some dodgy socialist who’s going to try to sign them up to donate to a welfare initiative or something. The horror!

Although some people looked at our free stuff with disdain or bewilderment, there were some people who were more than happy to not have to spend a few dollars on zines and get things on the house. Near the end of the fest, two teen punks barged into our table and went off on a “Fuck yeah! Free shit!” rant. The girl raved about how, “This is real DIY, not that capitalist shit that everyone else is doing here! They all want money!” Meanwhile, her unamused dude friend flatly said, “Everything here sucks other than your table. Just being honest.” They were more than stoked to take the Razorcake swag and gave us all high fives to show their appreciation. They were probably Canadian. 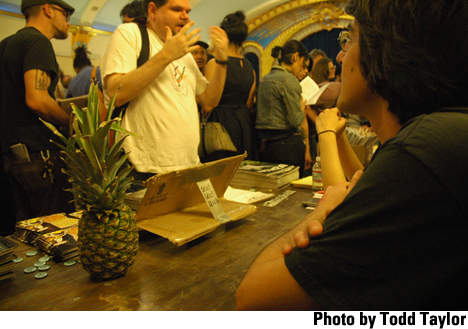 Some people were able to decipher the hideously confusing “Free or Trade” sign and actually traded things with us for free merch. We got zines, flyers, and a pineapple. If we’re being real here, the pineapple was pretty much the star of the entire fest. The father of the pineapple was a dude who was friends with Daryl and Razorcake founder Todd. He had apparently shown up at Todd’s house one day two years ago, sloshed to the extreme at three PM, and went on to do drunken things that drunken messes tend to do. You know, like strip down and decide to embellish the couch with his sweat. Either this guy has such a hardcore conscience that even Dostoevsky’s got nothing on him or he’s just cool as shit, because he came over, apologized for that day, and gave a pineapple peace offering.

Another cool trader was a guy who offered to make us peanut butter sandwiches in exchange for Razorcake merch. This amazing portable chef had a jar of peanut butter in his bag which he expertly slathered onto a piece of bread that he also pulled out of the magic bag. As he folded the bread piece into a beautiful mini-sandwich and handed it to me, I decided that he was the coolest guy in the room—the Lennon to everyone’s McCartney, the Fonz to everyone’s Richie, the Danzig to everyone’s Graves. Anyone who gives me free food gets ten million gold stars in my book (you should write that down for future reference).

L.A. Zine Fest was deservedly a huge success, thanks to the wonderful organizers and hard-working volunteers. There was a massive line-up outside that went all around the block, packed with people who clearly knew where the party was. The fest was a brilliant showcase of some of the most creative people from all over North America, and left people like me (who can’t even draw stick people right) feeling like a useless but inspired loser. A great feeling, really.

When doing my rounds, I asked one zinester why he came to L.A. Zine Fest. He looked at me like I was completely mad and then proceeded to yell in my face so that even my mitochondria would be able to hear: “BECAUSE IT’S AWESOME!”