So a few weekends back I was able to attend my third Riot Fest overall. After missing last year, I was pumped to down some WindyCity hot dogs and slam a few cold ones as well. Now, before we get too much farther along, let me state that is partial coverage of the event. I was not in attendance the first and last nights this year. Someday I may make it through all five days, but not this time. For a more complete review of all the shows, check out the Punk Vault site, which is run by Mike and who also provided a few shots for this article. Think of this more of a tale of one man’s journey through the massive onslaught of punk rock music that is Riot Fest.

Thursday-October 7th
I arrived in Chicago on Thursday afternoon. My partner in crime, Lew, picked me up at the airport and we headed to the hotel to drop off my stuff. He filled me in on last night’s show, which featured bands off the Busted at Oz compilation, reforming for a one-off performance. One of the highlights looked to be a reunion of the original members of Naked Raygun. Jeff Pezzati, SantiagoDurango (Arsenal, Big Black) on guitar, and Camilo Gonzalez (Toothpaste) on bass. Jim Colao was supposed to play drums but he hurt himself in a biking accident at the last minute. So current Raygun drummer Eric Spicer filled in. Also missing from this bill was the original line-up of The Effigies. The original guitarist, Earl Letiecq, said he was never asked to do this and also said he did not want to play with them anyway. Oh, the drama! Anyway, I can’t comment on the acts that played this night at the Double Door.
Early evening we headed out to grab some deep dish pizza at the first-ever Uno’s, then we were off to Subterranean. I had not been to this venue before. But I dug it immediately since they featured two dollar Blatz beer. The remaining venues that were featured in this Riot Fest were nowhere near as kind to my wallet. First band was supposed to start promptly at 9 PM. However, Lew and I ran into Tony from Shot Baker and Justin from Underground Communique Records outside. So we stopped to chat and ended up missing most of Squared Off’s set. However, the last few songs I did hear sounded pretty decent, including a Stiff Little Fingers cover. After they finished, I got to greet Mike from the Punk Vault, who was there to take some pictures.
Next was No Enemy! I really dug their sound, heavy but with good melodies embedded in their songs as well. I talked their merch lady into giving me a deal on their CD. Up on stage next was Mexican Cheerleader. Their singer came on stage and said “In honor of Bhopal Stiffs playing tonight, I wore the only ‘80s shirt I still have that fits me.” It was a Metallica And Justice for All shirt; still in pretty good shape I might add. Very entertaining set by this band. I especially enjoyed the singer’s chant of “Fist. Fist. Fist.” I don’t know why, but I did.
Finally, the headlining act, Bhopal Stiffs, came on. I noticed the singer from Johnnie Vomit and John Haggerty from Pegboy/Naked Raygun were in attendance. I was excited to see Steve Saylors play bass, as he had been a founding member of Pegboy as well. The band roared to life with “EPA” and took off from there. Yes, there were some typical Larry Damore moments (forgetting words, panting for breath, etc). But that’s what makes seeing him fun. The band also kept cracking on a recent punk documentary about Chicago’s early scene that failed to mention them at all. “We weren’t there” or “I was there” got a few chuckles throughout the night. The band played great and I was happy I got to see them, as I don’t think they are planning on playing again. By this point (around 12:30 AM), I was dead on my feet and ready to roll. Lew and I decided it was time to call it a night. Plus I think the bar was almost out of Blatz. 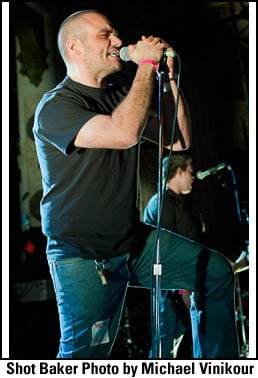 Friday October 8th
Rolling out of bed around 10 AM, I decided to grab some coffee across the street from our hotel. Who should I see but the legendary Mike Ditka outside his restaurant, talking to one of his employees. Before I had crossed the street, he was off in his sleek luxury sedan. Oh well, I doubt he would have posed for a picture anyway.
After grabbing a bite to eat, we headed to two different Reckless Records locations. I found some good stuff but didn’t see anything that would top the Naked Raygun matchbook from two years ago for eight bucks. Later on, we decided to head to Wrigleyville for happy hour. Bernie’s featured three dollar imports. Yah-hoo!
Then it was off to Metro for the show. I had not been to this venue before and was excited to learn later on that this was where one of my favorite music DVDs was filmed—Guided By Voices’ last show. (This is really no longer true, since I am going to see their reunion show this week.) First up was Explode And Make Up, a kick ass hardcore band which features members of 88 Fingers Louie, The Methadones, and The Bomb. They put on a raging set. I would like to hear more from this outfit.
Next was Shot Baker, who featured a new guitarist named Kentucky Jones. Although he did not sport a fedora, he still played well and fit in perfectly. Then came the set most here were waiting for—a reunion by Articles Of Faith. Although I would consider myself a recent AOF convert, I was familiar with Vic Bondi’s work, especially Report Suspicious Activity, who I got to see live twice. This was a whole different animal, however. The band put on a killer set, with the new songs merging perfectly with the older material. I was literally blown away over how excellent this band is, no joke.
Next it was over to Congress Theater to catch Bad Religion. The band is celebrating their thirtieth anniversary, so I snagged a cool shirt with Rockin’ Ronnie on the front. The band played an energetic set comprised of most of their albums. Thankfully, this was not a three-guitar outing for the band, so we got to hear Brian Baker shred it up once again. We also got to catch up with our good friend Bill, who was working hard at the door. Good stuff. Since Lew and me both had three—or in his case five—day passes, we decided to head over to the “secret show” at AAA. The Riot peeps had a school bus shuttle out front to take us over, which was cool since it saved us some cab fare.
AAA is a cool venue with an intimate feel. However, they need to upgrade the bathrooms. One stall does not cut it when you have a bunch of dudes guzzling PBR all night. Kind of a kooky stage setup too, but the sound was decent. First band up were The Dopamines. It was my third time seeing them this year, but they were still very entertaining. Get their new record now if you don’t have it yet. After their set, the drinks began to take over. I was basically sidelined during Less Than Jake’s set. Since Lew is one of their biggest fans, I knew I would catch them tomorrow in a better state of mind. Time to sleep it off. 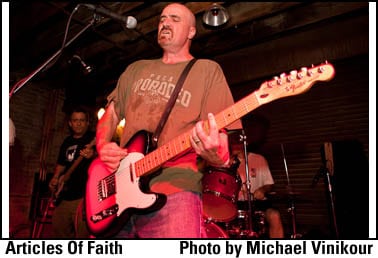 Saturday October 9th
Last day at Riot Fest for me, since I would not be able to stay for Sunday night’s finale. I was determined to pack in as much rock as possible. We got to Congress Theatre around 3:30 PM. First up was Have-Nots, from Boston. Good set. They put on a good show. I will need to check out more from them in the future. Next was Banner Pilot from Minneapolis. I was really excited to see them. I had not seen them since Insubordination Fest in Baltimore 2007! The lead guitarist’s licks reminded me of Bob Stinson Tim-era playing, and the band delivered. Awesome show and I got to tell Nate Gang afterwards and let him know I dug his book You Idiot, too. By this time Mickey from Philly punkers The Gerunds had also joined us. Somehow he snuck in some whiskey and he was off to the races.
The Swellers were up next. They didn’t really floor me, but the crowd seemed to enjoy them. The Flatliners were a little more my speed. After their set, we headed to the lobby to enjoy some delicious Congress pizza. Yummy! This was also a chance to miss the nü-metal stylings of Snapcase. But we were back in time to catch Less Than Jake. Their stage banter was funny, but I still can’t get my arms around ska punk. Horns should be left for Motown crap.
Pennywise was up next, with their new singer from Ignite. They played well, but I thought it was kind of cheesy that their new singer wears a black hat, just like their old singer did for ten-plus years. Maybe Fletcher thinks some drunk fans will think they are still watching Jim Lindberg? Be yourself, Zoli! Mighty Mighty Bosstones were next, and if you read my comments on LTJ, you can probably guess that this is when I went to go get another beer. Plus, these dudes were the only band at Riot Fest that would not allow pictures to be taken during their set. I guess because they think they are bigshots or something.
To cap off the night, we headed back to AAA to catch a smaller show with Articles Of Faith. Slightly different set list than last night, but equally amazing. Jeff Dean, the guitarist from The Bomb (and also their recent producer) got up to jam on three tunes. Larry Damore from Pegboy was spotted in the audience singing along with Vic Bondi. I also saw Jeff Pezzati checking out the show as well. I also held together much better than the LTJ’s set here last night. I knew tomorrow’s flight home would be a doozy.

Sunday October 10th
Well, another Riot Fest was over for me. It was another fantastic weekend and the organizers did an awesome job with the whole thing. Next year, just offer two dollar Blatz at all the venues.
Rock on, Riot Fest!

Thanks to Michael Vinikour for the photos.
Lots more at www.punkvinyl.com