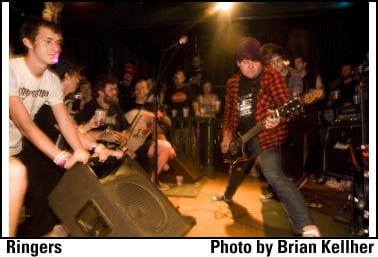 Most bands go out with a final record, a last show, a bitter implosion. Not many peter out on a Razorcake interview. But Ringers were calling it quits in only a few weeks time, so we started making funeral preparations. An obituary was conducted over a bottle of whiskey, about two hundred cumulative cigarettes, and the muted din of a Pearl Jam rip-off band. And maybe it was knowing that the end was near. Maybe it was the whiskey. But for some reason, that interview went on for hours. Since Todd didn’t want to put out a special edition Ringers-only issue (#55), some of the fat was sheared and saved for the web. We were left with a full tape recorder and promises of a last show, which never panned out. Too bad, but the songs that would have been played—comfortably nestled between a passed-out Tim Armstrong and, I don’t know, an involved, slightly disappointed, actual punk—will stand the test of time. Just ask Barker’s grandma—she loves that shit.

If you want to read 8,386 more words from the Ringers, please accept this invitation to purchase the print version of Razorcake Issue #55.