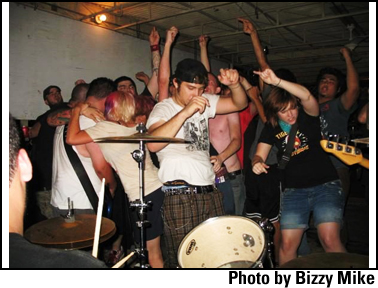 When it comes to talking music, I’ll admit that I’ve always had a strange hypocrisy when it came to finding people with whom I have common ground. I’m sure it stems from the conversations I once held with other people about the subject of music. Nearly every time, without fail, punk rock would enter the equation and the conversation would go awry. There would be some room for common ground, be it a few NOFX albums, or the random Ramones songs they knew, but, inevitably, it would enter the field of the high-gloss, rosy-cheeked, brand-marketed hooligans whose latest hit had reached top 40 status.

I think it’s understandable why I got a sour taste in my mouth after a myriad of similar conversations. I honestly didn’t find people with similar tastes until my final months in high school. In all my years in school I had successfully converted one person into the glorious world of lo-fi and DIY, but he soon abandoned it for two-minute-long guitar solos and refusing to cut his hair. You could say I was skeptical, but I think jaded is a more apt word.

That’s not to say that I never saw anyone else with an eclectic taste like mine. I remember specifically going to the upper class mall in San Antonio and seeing a girl wearing the same Crass shirt that was also on my torso. (Incidentally, I only bought the shirt because the girl I had a crush on was so deeply in love with their music… and other women, but that is beside the point.) The thought was odd to me at first, but I think it was more the fact that I rarely encounter anybody at all who listens to the strange tribal energy that is punk rock.

In a more recent occurrence, I was walking my route to class one morning at the local university only to hear a car blasting what I could only conclude was the classic Propagandhi album Today’s Empires, Tomorrow’s Ashes.  I thought to myself, “Why is someone listening to Propagandhi here?” It is the single most hypocritical thought I have almost every few months. I mean, they’re me. Maybe I’ve passed someone with a comparable thought when I’m driving, blasting the newest Bananas album. How would I know? I’m in a car!

Yes, it’s a simple thought, but it’s been a recent revelation to me that I shouldn’t force a location on music. I had just assumed that no person wearing a Conflict T-shirt had the right to go into a fast food restaurant. I’m a terrible, terrible person. I know.

The thought became a reality to me when I was attending a local show at a bar called Café Revolution. The venue is strange; its normal clientele are rastas, as it proudly touts itself as a reggae bar. Luckily, when the normal punk clubs are sick of the San Antonio pop punk bands, Café is more than willing to accommodate us. Well, at least they let us play there. And by “let,” I mean begrudgingly allow us onto the premises with equipment. Whether the owners show up to let us in is another story. A story for another time, perhaps….

And that time is now. I’ve had weird experiences at this place. It was the place where my band played their first show, kind of. It was supposed to be a practice just using the gear of the venue, but the show started super fucking late because the owners took their sweet time. We decided to sneak in via the back gate to steal some electricity. We played a five-song set, which made us feel terrible as a band because we hadn’t practiced in three weeks, but it got our first “show” out of the way. The owners showed up midway through the second band and told us that it was good that we found a way in because they had completely forgotten about the show. Lovely.

Anyway, a few months later we had some touring bands coming through. The local venue of choice is usually a place called the Ten Eleven, but we have to share it with the indie and hardcore pop bands, and they had the venue for tonight. My band wasn’t playing this night. I was just there to hang with friends and catch some good music.

Honestly, that last idea was more of an “in theory” type of thing. After a set or two, I wasn’t really feeling the music and felt more comfortable striking up conversations with people. I spent most of my time outside the venue shooting the shit because, on some nights, I’m just not feeling the live show vibe.

And so it came to pass that I began talking to the drummer of one of the touring bands. (Let me tell you now, I’m refusing to name drop. I think I do that too much already.) Eventually we got to talking about the venue, and He Who Shall Not Be Named said something along the lines of “I love it when punk shows are where they shouldn’t be.”

I’m not saying it’s the greatest thing ever muttered in all humanity, or that it was a soul-shattering moment, but it did make me feel kind of like a jackass. He was right. Punk was better when it was all coagulated at a place that made everyone there seem out of place. Well, some times. It’s not so good when a pop punk band plays in a bar that plays gore movies all day every day, or when a band you want to see plays a bar, charges fifteen bucks a ticket for two bands, and ten people show up. Those situations are slightly terrible. But sometimes a band will play a free show at a house owned by someone whose place is way too nice for such a show, or they’ll play under a bridge, like trolls, and it becomes this beautifully strange event.

Have I learned my lesson? Am I still a horrible bigot? I really have no idea. Hopefully, though, I’ll continue seeing everyone right where we shouldn’t be.