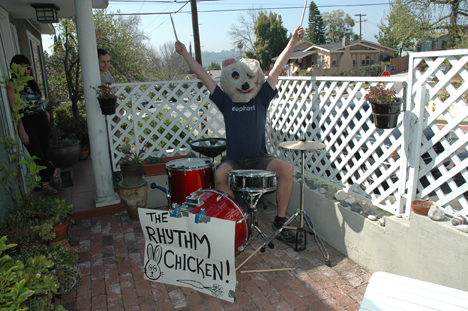 About once every four years or so, the Rhythm Chicken escapes the icy grasp of his northern Wisconsin coop and spreads his audio/visual poultry disease to the unsuspecting lands of non-Wisconsin. Today’s photos bear witness to the thirteen stops of his recent attack on Los Angeles. A few gig venues were chosen ahead of time, while others were instigated while the tour was in progress. In the end, many L.A. folks were annoyed, shocked, or enlightened, and a sloppy percussive clatter seared through the smog-filled air. Seismic measurements were not accurately determined, but his earth-shaking rumblings surely pushed California a few notches closer to the ocean!

Much thanks go out to Noah, Dave, and Eric from Wreck Of The Zephyr for the use of the Mobile Ruckus Transport Unit (the van). Piled inside were Todd Taylor, Donna Ramone, Adrian Chi, Daryl, Matt, Marcos, Jenn, Joe Dana, and Josh, all faithful soldiers in the Rhythm Chicken’s Roadie Militia. Without this hardworking troop of ruckus enthusiasts, the tour would not have been possible. Three cheers for the Ruckus Militia!

The tour began with the Chicken pounding out his chicken-rock to various babies and pre-schoolers. It ended with the Chicken thrashing it out for a bar room full of bellowing lovers of beer-drinking and record-listening. As for what happened between those two, we’ll let the visual evidence do the talking. Some of these gig venues may look familiar, others may not, but none were spared from the chaotic lunacy. Some people smiled, some clapped, many seemed confused. In the end, a van crammed full with ten punk rockers and a drumset zig-zagged around L.A., laughing and spreading the word of RUCKUS!

All photos by Todd Taylor 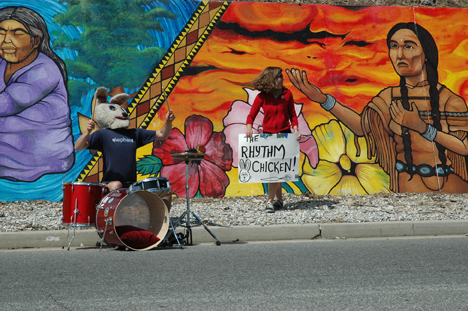 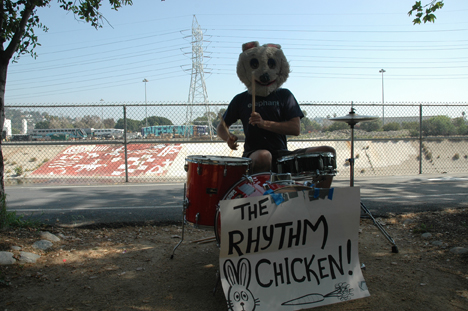 L.A. River, off of Riverside Drive, on the Greenway Trail 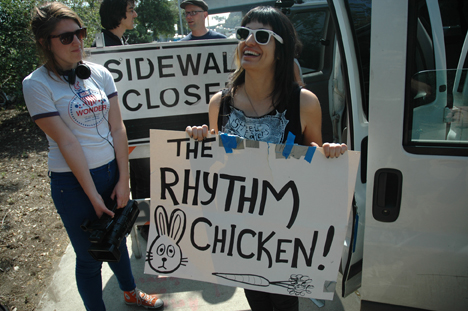 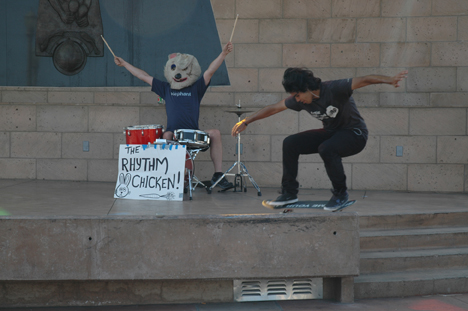 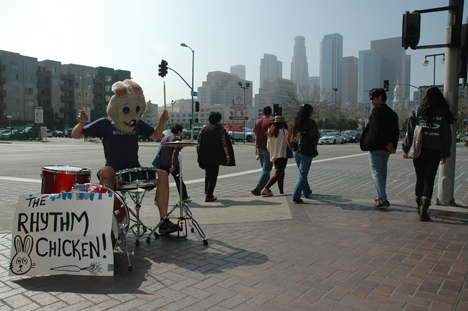 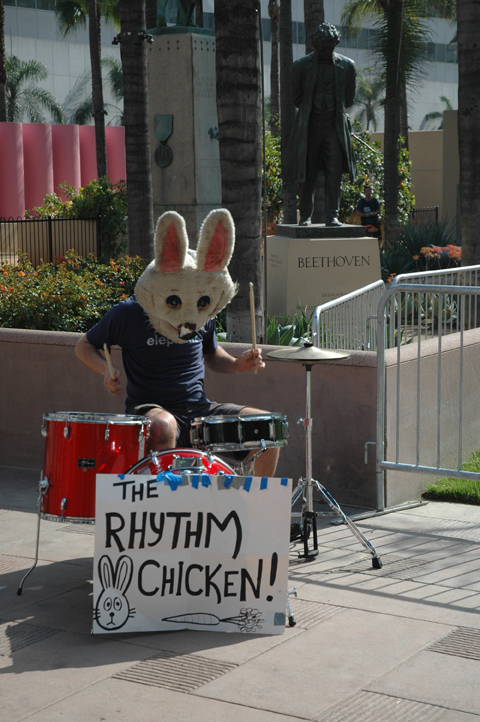 Pershing Sqare, in the shadow of Beethoven's statue. 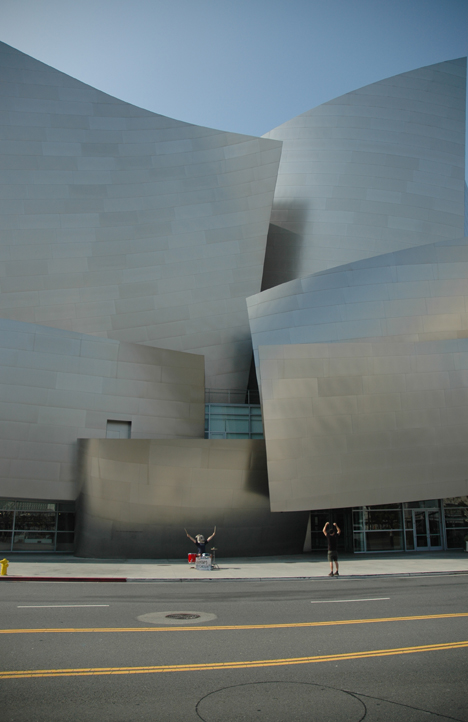 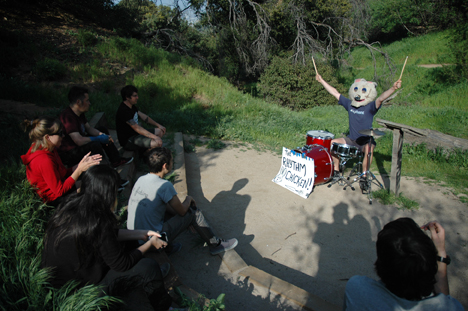 Where Todd thought the abandoned zoo was.
Fireside chat somewhere in Griffith Park. 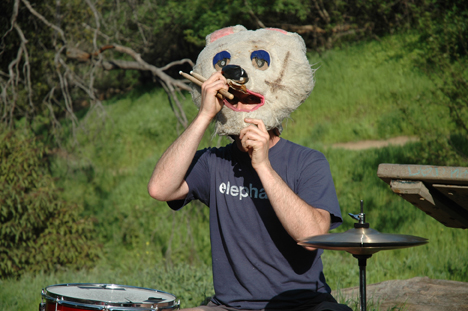 Several hikers turned right around when they saw the Chicken. 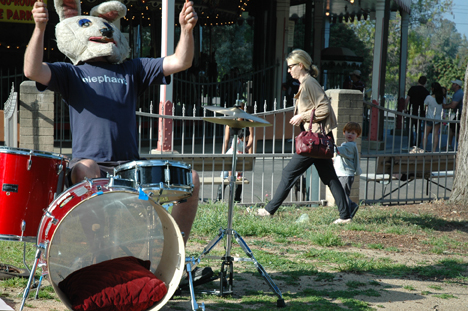 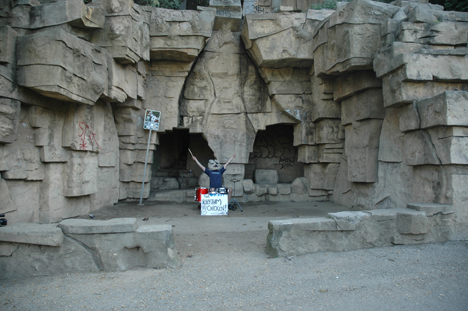 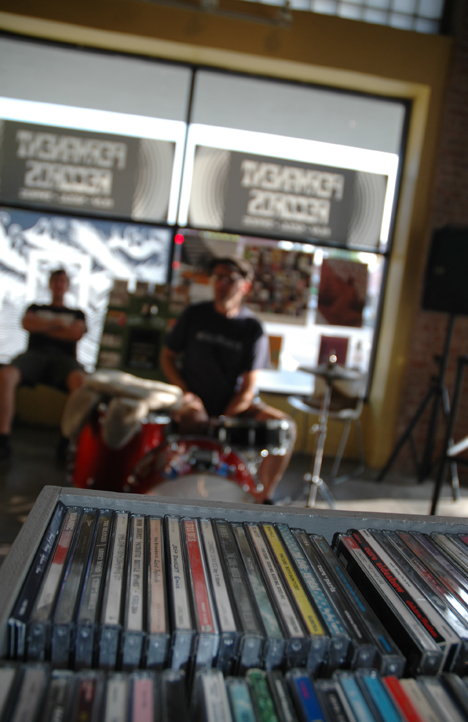 A pause before the Ruckus. 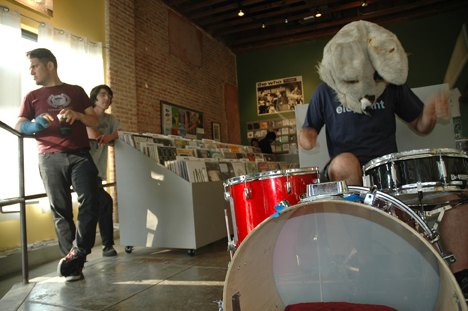 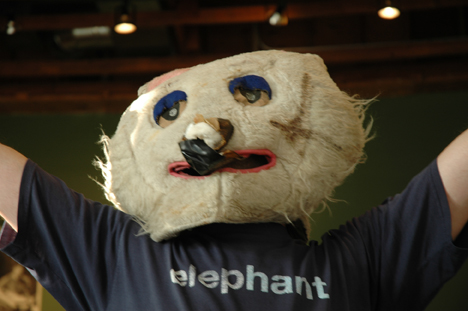 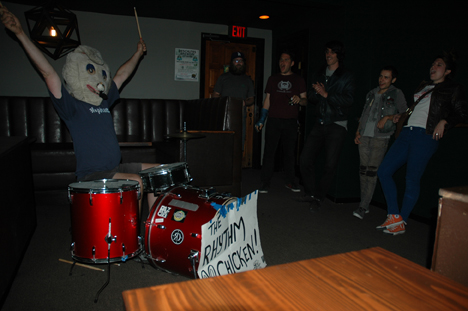