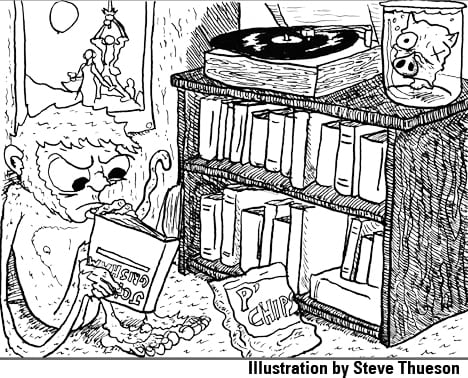 Reviews from Issue 75: Reading is what separates us from the other monkeys, posers.

In fact, “love” is the top keyword in our internet analytics mumbo-jumbo; at first we didn’t understand it, but it’s starting to make sense. Below are a few examples that embody what a Razorcake review is all about. It’s not all sycophantic devotion. We do criticize some things or at the very least attempt to understand and contextualize them.

It’s not always easy and while we may not know what “intersectionality” means, we always try to bring our love to the table. So put a little love in your heart and check out our upcoming reviews.

Reading is what separates us from the other monkeys, posers.
–Matthew Hart

COLISEUM: Sister Faith: CD/LP
Do you ever wish Jawbox would reform? What if they replaced J. Robbins with the singer from Torche or Baroness? And what if they turned the guitars up, gave them some oomph and listened to Motörhead before recording an album? (What if I stopped asking “what if” questions and got on to the rest of the review?) It may be hard to believe, but that’s what Coliseum’s latest album, Sister Faith, sounds like. The Louisville three-piece has been around for approximately ten years, which is crazy because it seems like just yesterday Ryan Patterson, the singer and guitarist, was in The National Acrobat and Black Cross. And yet here they are, with a great thirteen-track rock record with a gritty feel and great production (thanks to the front man of the aforementioned Jawbox, J. Robbins). Some of the songs brim with fierceness, while others seem more laidback. They’re catchy in as much as that is possible with post-punk music, but I certainly found myself singing along after a while and having bits of lyrics running through my head throughout the day. But in the end, it really is amazing how much this reminds me of Jawbox. Listen to “Used Blood” and tell me the opening guitar riff, throbbing bass, and drums are something J. Robbins and company wouldn’t have come up with. It goes from that right into “Late Night Trains,” whose guitar opening sounds like another J. Robbins piece. Listen—there’s a fine line in the music world between being influenced by and copying another band. I don’t know what it is but I know the difference. In this case, Patterson’s vocals and lyrical content (approaching religion in a direct sense) are different enough to not be subject to cries of poser. Instead, the band has found a great flag to wave and a conglomeration of enough sounds to be impressive and not ridiculous. –Kurt Morris (Temporary Residence)

NATO COLES AND THE BLUE DIAMOND BAND: Promises to Deliver: LP
Alright, here goes. Sometimes there are people in our particular music community who just stand head and shoulders above most others. True musicians with innate abilities and quite obviously encyclopedic wells of reference with a grasp on their craft that most can never hope to achieve. Individuals who seem almost too talented, clever, and fully-realized to belong to what “outsiders” would consider a genre built on cutthroat delivery-yet-amateur ability. For me, from the first time I heard “Flash Infatuation,” Nato Coles has been one of these rare gems.

While the Modern Machines gave us a glimpse of Nato’s gifts, and Radio Faces showcased even further progression into what he’d become, it wasn’t until Used Kids’ 2009 LP Yeah No that I feel like Nato found his own stream. For four years I’ve spun this record constantly, repeatedly shocked and awed by the Westerberg-by-way-of-Springsteen-via-classic-Motown-yet-somehow-unique songwriting and performance. And fuck, I was truly heartbroken when I learned that I was seeing what was reported to be Used Kids’ last show at Fest 8.

I knew, however, that it’d be no time before Nato was back with something new, and if history were any indication, even better. Fast forward to Awesome Fest 5 in San Diego and my first peek at the Blue Diamond Band. Granted, the set was peppered with tracks from Nato’s previous output, but the band was on point and I was thrilled with the potential that jumped and howled and strutted before me. Skip to The Fest 11 in Gainesville and a setlist comprising the band’s new material. Jaws on the floor, mile-wide smiles, and beers being danced happily from their cups: Nato and company tore Nelly’s down and I knew that my man had trumped his already-amazing earlier self.

And now, listening to Promises to Deliver, care of that cutie Mike Dumps, I can barely believe my ears. Immediately, I knew that I was hearing something I’d deeply love forever. Flawless performances and a sound reminiscent of one crafted by a young Jimmy Iovine aside, these songs are on an entirely new level. To attempt to justly describe them individually, or as a whole, or even how I personally feel when listening to them would inevitably fall well short. It is quite simply a brilliant, passionate, unbelievable record from a man (and his band) who has reached the staggering potential hinted at in those Modern Machines songs. To me, it could very well be the high point in our little world, in recent memory. It is almost too good. Almost. And at the risk of getting way too corny about it, I honestly want to thank Nato for these songs and so many before them. Dude: wow. I really hope you’re so proud. Because I’m even fucking proud that this came out of something I’ve been a part of for so long. Dang. Dude has delivered. –Dave Williams (Dead Broke)

After-Life Story of Pork Knuckles Malone, TheBy MP Johnson, 93 pgs.
A squirmy, oozing green horror story about a wayward porker with dark, eldritch powers is a story right in my wheelhouse. As it turns out, my dad was a professor of veterinary pathobiology and as a kid my tender brain meat was forever scorched with the image of a one-eyed pig head that used to sit in a jar of cloudy sick-green fluid on a shelf in his office. So I’m right at home in the realm of demented swine nightmares.

I am also a big fan of Pigasus, the hog that the Yippies ran for President in 1968, so I’m very comfortable with the notion of porcine apotheosis.

It should be pointed out from the outset that this particular novella was written by MP Johnson, a brethren of the Razorcake cabal, and that makes a review like this potentially tricky; one misstep and I could be accused of Razorcake nepotism and my sterling reputation as a journalist possessed of the finest cut of jib could be brought into question. The other potentially tricky aspect of my reviewing The After-Life Story of Pork Knuckles Malone is that there is a very real danger of cobbling together a review that’s almost as long as the book itself.

Succinctly put, this story is a sort of an unwholesome twist on the beloved “a boy and his dog” tale, the classic oft-told storyline that has, at its heart, the bond between man and pet. Something along the lines of Old Yeller. But in this particular case, the pet is a pig named “Pork Knuckles” and, for the bristly bulk of the story, it’s a postmortem pig in the commodified form of a honey-cured ham, with a certain consciousness and enflamed willpower still inexplicably intact. But the unpleasant transformation from happy, healthy pig to rancid ham seems to have left our hero in a multi-dimensionally foul mood that would rival the crankiest tantrums of Humwawa, the Lord of Abominations and All That Decays, whose breath is the stench of dung, and who is known as the most ill-tempered of all the dark denizens of the netherworlds. And so Pork Knuckles is propelled along on a Rambo-like path of destruction, taking down all those who did or would do him wrong.
The wretched truth of the axiom “hell hath no fury like a swine scorned” is then depicted in gut-wrenching detail as the vindictive ham zombie—wearing Rev. Nørb style deer antlers—metes out heaping pork-stinking helpings of ultra-violence on a cast of ne’er-do-wells and social upchucks ranging from rabid roid-rage drag queens to avuncular crust punks and white trashers.

And that’s just a thumbnail sketch, at best.

With the rapidly and surrealistically shifting storyline and the even more rapidly transmogrifying characters, one can easily picture author MP Johnson as a young buck weaned on harrowing amounts of sucrose-painted marshmallow sweety bits cereal and countless seizure-inducing episodes of He-Man: Master of the Universe. And maybe a little Pee-Wee’s Playhouse, to boot.

With a pig-tail twisted book like this, the list of potential influences that one can imagine straddles both the mainstream and the transgressive.
Along with a high sugar diet and strange children’s TV shows, there are possible contemporary forbears from the world of literature as well. Picture the jarring imagery of people like Chuck Palahniuk, Bret Easton Ellis and/or Kathy Acker, combined with the colloquial ham-and-eggs tone of authors like Jim Thompson and Jack Black (author of You Can’t Win.) The combination creates a strange brew indeed, one almost Alfred Jarry-like in its absinthe absurdism.

But enough guessing about MP’s possible influences. That kind of conjecture is symptomatic of critic’s disease. Just like how a symptom of GG Allin’s lyme disease was his proclivity for hurling his own bowel custard at audience members.
You could even say, I suppose, that Pork Knuckles Malone is the red-headed, oinkish grandkid of literary offerings along the lines of Bataille’s Story of the Eye or William Burroughs’s “talking asshole” bit from Naked Lunch. Just toss in some over-the top, bath salts-fueled, Rob Zombie-esque movie violence and you’re approaching a realm where avenging oozing-green hams can take possession of people, travel through deep space and eventually become a Hamgawd on a planet called “Porknuckas.”
And happily, this is the same realm where there exist things like misanthropic flies named Zzz who turn out to be Adolf Hitler transmigrated. (One of my favorite parts of the story.)

On the other hand, this might just be a cautionary tale about the potential dangers of the pet/pet-owner relationship, a near sacrosanct institution in this country and one swaddled in thoughts of cuddliness and the warm fuzzies. But as any eyeless, cheekless former chimp owner can attest to, it’s a relationship that can viciously turn on you in two shakes of a primate’s pituitary gland. Just ask Michael Jackson’s original nose.

Anyone looking for morality lessons or deep philosophical insights in this book might be left “pig-biting mad,” as Weekly World News columnist Ed Anger used to say. But people comfortable in the weird waters of things like Adult Swim will feel right at home, and will probably heartily enjoy the twisted tale that is The After-Life of Pork Knuckles Malone.

Personally, I found it to be a refreshing change of pace; having just finished reading Jack Grisham’s paean to gluttonous sadism entitled An American Douchebag, wherein the reader is treated to a glorification of the Malignant Narcissist personality disorder, Pork Knuckles provided me with something more light-hearted and, by far, less postured.

While both fables can be said to be about hams and while G-ham’s book wasn’t without its interesting moments, if I’m going to invest my time in following the sadistic travails of a meathead bent on terrorizing every poor sap who crosses his path, I’ll take the honey-cured ham over the malignant narcissist every time. –Aphid Peewit (Bizarro Pulp Press, bizarropulppress.com)