To put it simply: The Degenerics are New Jersey legends. First started in 1997, they played continuously until their breakup in 2003. What makes them unique is that even after they broke up, they never really left our minds, as most bands do after they separate. This show was put together in an effort to have an all-ages performance the day before a 21+ show The Degenerics were playing the next night, which was, technically, their “official” reunion.

The first band to play was added at the last minute, but proved to be quite talented for their young age. The Jurks first played some instrumental surfer music and then went into several pop punk songs. I kind of wished they had stayed with the surfer jams, but their regular stuff was really enjoyable too. I also noted that they took a riff from Super Mario Brothers, and if there’s anywhere to steal music from, it’s video games. I would really like to see where this band goes in upcoming years.

The last time I saw For Science I was drunk—so drunk I had to lean against a wall to keep from falling down. Literally all I remember from their set was that the lead singer appeared to be wearing a grandma sweater, and that it made me really amused…. So, basically, this was my first time really seeing them. At first they didn’t receive much response from the crowd, but they eventually found a medium-sized group of people around them singing along. They ended with a rousing cover of “It’s the End of the World as We Know It (And I Feel Fine)” by R.E.M. that rivaled No Doubt’s cover of it live on MTV on New Year’s 1999. It was a thrilling end to their set, as those in the crowd tried to follow along as best they could. Be sure to check out For Science on their upcoming fall tour of the Midwest.

The R.E.M cover served as an intense foreshadowing, as the show was nearly shut down after For Science’s set due to local neighbors calling in noise complaints. Luckily, it was quickly moved to a basement a town away (in the middle of nowhere) and The Degenerics were able to play. I cramped behind an amp and watched the tiny basement erupt as they began their set. If you’re from New Jersey and didn’t go to this, you truly missed out; melodic instrumentals is such a understatement in describing this band. Although the basement was tiny and had thin ceilings, people still jumped up on top of each other and crowd-surfed (if even for five seconds). The room got hotter with every song, and although some later complained the set was “too long,” it seemed suitable for a band playing their reunion show. As they closed with “I Don’t Wanna,” everyone was so happy that all was not lost with the change of venues and that The Degenerics were playing to an all-ages crowd before their 21+ show the next night. 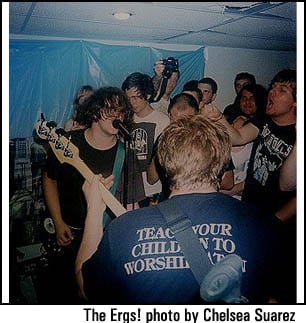 The show was not over, though, as The Ergs!, who are quickly gaining NJ legend status, still had to play. You would have sworn it was The Ergs! reunion show as people appeared to be going even crazier during their set, perhaps because some find it easier to dance and sing along with pop punk as opposed to hardcore. Either way, The Ergs! played a great set as usual; even towards the end when their mic broke, they weren’t slowed down. Everyone there knew all the lyrics, and were able to amplify the words more intensely than any mic could. Their set lead me to believe that the real end of the world may occur when The Ergs! break up.

FAERIES, THE: Riot in the Hive Mind: CD

ANTIDON’TS, THE: Ate My Pizza!: CS