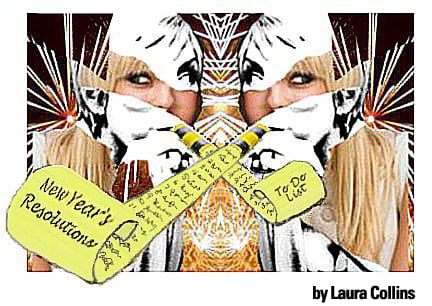 Resolutions and Lists, Buckets Not Included

My New Year’s resolution has been the same for about the last ten years: To not make any promises that I don’t intend to keep. It’s a bit of a tongue in cheek way of saying that I think New Year’s resolutions are stupid. They’re the kinds of promises we make, ostensibly to ourselves, but really at the behest of spouses, significant others, or family members. In January, New Year’s resolutions all sound like worthy causes—to quit smoking, lose weight, read the complete works of Shakespeare—but by April, they’re goals that largely fall to the wayside of our busy lives. The gym membership goes unused, the ash tray continues to pile up with cigarette butts, and the book someone spent fifty dollars on collects dust on an end table in their living room.

Witnessing this year after year has convinced me that it’s an almost unwritten rule of the whole New Year’s tradition that resolutions are made to be broken. I make the same resolution every year because it’s a kind of loophole in the system, adhering to the spirit of the tradition, but being more practical in its ability to be accomplished. Making a resolution to make no promises is essentially like saying that I make a New Year’s resolution not to make resolutions. It sounds bizarre in that context, but at least I’m being honest with myself, and not setting myself or others up for disappointment.

I write all this up front as a lead-in to a confession: I’m an obsessive writer of “To-Do” lists. I have old ones scattered throughout the papers on and around my desk, each in varying stages of “To-Done-ism.” I write monthly, weekly, and occasionally daily To-Do lists depending on how hectic my work and writing schedule is, and how many assignments I’m trying to juggle. My To-Do list for the next month looks something like this:

A few of these items have been on my list for several months now, migrating from one sheet of paper to the next as I rewrite my lists and as my schedules and priorities change. One of these items I’m working on as I write this.

In addition to these short-term To-Do lists, I also keep a special list that I update every September around the time of my birthday. When I first started keeping this list in my early twenties, I referred to it as my “Ten Things I Mean to Do Before I Die (Don’t Call It a Fucking Bucket List) List” but now I simply refer to it as The List. The List is an ongoing project and always consists of exactly ten things. As soon as I complete something, I cross it off the list and replace it with something else, so that I always have some sort of project or long-term goal to be pursuing.

I’ve come to believe strongly that if something is worth doing, it’s worth putting down in writing. I think partly why so many New Year’s resolutions fail is because people don’t put them down in writing. Putting goals down in writing makes them more tangible, it makes them feel official—like a contract you’ve made with yourself. My habit of keeping lists has value because my lists not only record goals, providing positive direction to be shooting for at all times, but they also create a bit of accountability by holding me to what I say I mean to accomplish.

The first version of The List I ever wrote down, I composed shortly after turning twenty-one. At the time I hated my job and regretted a few of my recent life decisions—mainly dropping out of school. Determined to turn things around and keep some PMA (Positive Mental Attitude), I wrote down ten things that I wanted to do with my life. Some items were tangible, and others less so, but writing them all down reminded me every time I looked at the list of my priorities. One of the bullet points at the top of that list was “Go back to school and get my degree.” I only had ten things on that early list because I thought ten was a nice round number and because I wanted to fit all of my bullet points on one page of the tiny writer’s journal I kept in my pocket at all times.

Since that time, I’ve accomplished nearly all the goals on that first version of the list, as well as numerous others. Over time, some of my priorities have changed. Things that had been on that list are no longer there, not because they’ve been accomplished, but because they are no longer applicable to my life.

I think a willingness to adapt your goals to suit your life is an important one. Just because I am writing goals down when I’m twenty-one doesn’t mean my goals will be the same when I’m twenty-five, or when I’m thirty-one. For example, one of the goals on my list for a number of years, right after the goal of earning my bachelor’s degree, was to get into law school. Perhaps I spent too many late nights in my early twenties watching legal dramas on late night TV, but I really wanted to change the world and make a positive difference. In the course of going back to school and finishing my bachelor’s degree, I realized that law school was not the direction I wanted to take my life. I did well in all my law-related undergrad classes, and found them interesting, but my real passion was writing and it seemed foolish to not pursue that dream.

Today, countless To-Do lists later, I have written a novel that I’m revising for publication, had pieces in a number of my favorite magazines and webzines, including having the pleasure of writing regularly for Razorcake. The future looks bright because it’s a future built on goals and ideals I had the courage to write down, the determination to follow through on, and having enough understanding of what I want out of life to know to abandon goals that were no longer applicable in favor of those that were. With that in mind, here’s an updated version of The List:

* Stick to the maxim “Plunge Boldly Into Life,” and never waver from it.
* Put my first novel in the hands of an agent or publisher.
* Finish the first draft of my second novel.
* Finish a triathlon.
* Run a marathon.
* Get one of my webcomic ideas going.
* Bicycle cross country (Portland, Oregon to Connecticut).
* Make time to pursue the things I’m passionate about.
* Set foot on at least two other continents besides North America.
* Always have goals, but never be confined/defined by them.

While I have no plans to change my New Year’s resolution from the one I make every year, I’m working hard to stay mindful of my priorities and to keep them in writing where I can see them. May you have the courage to write down your own goals or resolutions and the tenacity to keep up with them.