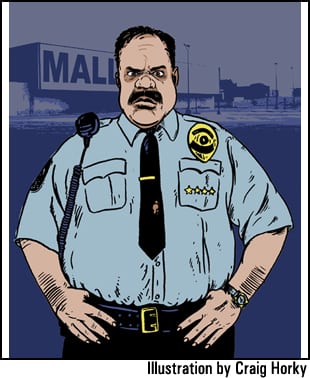 “GET ON THE FUCKING GROUND NOW!” God, I hate the mall. The real cops had their revolvers pointed at my head and chest while the grinning Ontario Mills mall security dorks pointed their pepper spray and taser guns. “You’ve got to be kidding!” was my incredulous and rather foolish reply. “GET ON THE FUCKING GROUND OR YOU WILL BE SHOT!” God, I hate the mall. “NO!” I angrily yelled back. “I did nothing wrong, and it will do wonders for your career to shoot an innocent person for no reason!” The Ontario Police kept yelling and pointing their weapons, and I defiantly held my ground. “GET YOUR HANDS OUT OF YOUR POCKETS!” God, I hate the mall. My hands were not even in my pockets. Looking back on it now, I realize they were contriving an excuse to shoot if I did not prostrate myself on the sidewalk. “Marcus, please get on the ground,” said Daniel, a fifteen-year-old tutoring student of mine who was already on his stomach next to my other student, a terrified seventeen-year-old boy who had Asperger’s Syndrome (a mental affliction similar to Autism.) It did not even seem real. It was like a bad trip. All the flashing lights—red, blue, and mall-cop yellow—and the angry, screamed commands blended together into a surreal, off-balance, dream-like montage until Daniel’s voice cut through the swirling insanity. “Marcus, please…” The usually defiant and socially apathetic youngster had ironically become the voice of reason, and listening to him probably saved my life. God, I HATE THE MALL!

Just moments before all this horrible nonsense, we had left the movies by means of an exit that emptied onto a long, outside utility corridor that twisted ninety degrees to the right before opening onto the vast parking lot. Spotting an unattended laundry cart that was half-full of dirty towels, I did what any other impulsive goofball in his forties would do. I jumped in, and told the two boys to push me down the walkway. The two pushed hard and the cart took off until it slammed into the wall at the corner. We walked off laughing, until two young mall security guards came rushing up angrily asking what we were doing. “Riding in a laundry cart,” was my reply. Unamused, the older security dork ordered me to push it back to where we got it. I smilingly did as he commanded and when I returned, the younger guard said, “This could have been a terrorist attack.” Such an absurd comment must surely be a joke, so I replied in kind. “Yeah, Osama Bin Ladin needs dirty towels, so the Al Qaeda sent us here to get some!” With that, the three of us began to walk toward the parking lot so we could go home…but no. The older guard angrily ordered me to come back and I refused. He was talking to someone on his radio, and although we did not realize it at the time, he was telling Ontario P.D. that I was making terrorist threats.

The Ontario Police Dept. has a substation at the Ontario Mills Mall, so they were on the scene in about thirty seconds, much to the laughing delight of the two morons who summoned them. After several terrifying moments of being threatened at gunpoint, the cops realized we were no danger, but they were not done. Seeing that one of my young charges seemed to be in a trance, two officers began to taunt and accuse him of being on drugs. “WHAT’S WRONG WITH YOU? YOU LOOK LIKE YOU’RE FUCKED UP ON DRUGS! ARE YOU ON SPEED? YEAH, YOU’RE ON SPEED AREN’T YOU?” The boy with Asperger’s just sat in silent horror as the relentless, shouted accusations continued only inches from his face. I had never seen a black person turn pale before. “Leave him alone! He has Autism!” I knew they would not know what Asperger’s Syndrome was, so I said it was Autism. No effect. They kept on shouting and deliberately trying to provoke him into striking out. “Do you realize that you are harassing someone with a serious mental disability?” I asked. That apparently did the trick. They backed off after that, and commenced with angry lecture on the dangers of making terrorist threats.

“No man, those two laughing clowns over there deliberately lied to you so they could enjoy the show you just put on for them!” Again, I was angry, defiant, and enthusiastically shooting off my mouth. I told the police exactly what I said about Al Qaeda needing dirty towels, but instead of appreciating the ridiculous nature of the obvious joke, they defended the actions of the still-chuckling security guards. “Who knows what Al Qaeda terrorists look like and what they might need,” one of the cops asked me. “Are you serious? The problem here is that those fuckheads over there made up a story so they could watch the big dogs come running and the next time they do it, somebody might get killed!” Instead of understanding and doing the right thing—which would have been to arrest and charge the security guards for making a false statements to the police—one of the officers came over and calmly told me to shut up or they were going to kick my ass. Eventually, we got to go home, but only after signing a paper stating that we agreed never to come back to Ontario Mills Mall again. I signed my name as Allouisis Mcgillicutty, and dated it something like April 56, 1836. God…I hate the mall.

Fast forward about four years later and I was back at the same mall to see a movie and I started to have an anxiety attack. Much of it was because of my memory of almost getting killed for the crime of dirty towel joy-riding, but also because… God, I have always hated the mall. Being of the punk-minded nature, I instinctively avoid places that are saturated with and promote empty consumerism and conformity. Crowds do not necessarily bother me, (I go to crowded gigs all the time), but mindless masses of people buying tons of useless crap while they judge themselves and others by the things they own and wear…it drives me quietly mad. So I stood there, thinking that it was all too loud, too bright, and too fake as my nervous system pumped adrenalin and a host of other fight-or-flight chemicals into my system.

I stood perfectly still and began to do deep-breathing meditation. I remembered how when I lived in a Buddhist monastery in the remote Thailand jungle, I developed a bit of a phobia about being in the city. After a couple months of mellow, meditative slowness, the rest of the world seemed a lot like one of those old-fashioned, black and white films where everything is moving way too fast. The city was dirty, deafening, and under the control of corporate monsters that consume the land and all its people. When I returned home, the culture shock eventually subsided and I once again acclimated to my suburban surroundings. Back at the movies, I calmed down, realized that I like loud, colorful things, and that I was experiencing a conditioned response to stress. Then, I went in and thoroughly enjoyed the 3-D movie Coraline with its loud, bright, and delightfully weird imagery infused with the profound message of choosing flawed reality over a seemingly perfect, but illusionary world.

Those meditational lessons in emotional and situational control often come in handy…when I remember to use that skill. A couple of years after returning from studying meditation in the Thai jungle, I was a Samanera (novice) monk in Los Angeles for a short time. I became restless and hungry for things like loud music, female company, and my skateboard. I left the temple and soon found a job at a small, local tutoring center and I eventually came to own it. There’s a gas station on the corner that has been empty for almost two years. The empty, boarded-up building was a visual blight and a target for graffiti. When the Valero Corporation finally reopened the place, I was glad. But then I wondered, “Am I a hypocrite? Do I appreciate the corporate entity only when it benefits my self-interest?” The main reason I welcomed the fuel producer from Argentina was that it serves as an anchor, thus drawing more potential clients who see my tutoring center business. I stood there on the corner and began to do deep breathing meditation. I counted nineteen large trees. I admired the landscaping and noticed that flowers, trees, and chirping birds dominated the view. Yes, there were houses, condos, a metal fabrication plant and a gas station, but it was all balanced with well-sculpted landscape architecture. Then I remembered that Buddhism is the middle path. Too much development would be a soulless concrete jungle. No development would make it impossible to provide the necessities we need to grow and survive. I like things like candy bars, sodas, and being able to put gas in the car at a place right next door. I like having more and more people see my little sign so we can help kids and older students to learn things. Too much of anything is bad. Too little of anything is bad. I love doing something worthwhile in a place that is neither overdeveloped nor too remote, but God…I hate the mall.