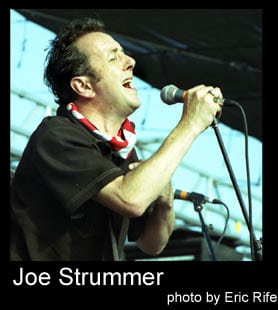 I met Joe Strummer in London a couple of years ago. I was walking along the Thames when I heard a man behind me ask where some place was. He was talking to the person next to him, but believing he was asking me, I turned to answer and blurted out "Joe Strummer?" in surprise. He answered yes, and asked my name over a handshake. I figured that would be it and began to walk on, but we three (I think the other person was his agent) were still headed in the same direction, so Strummer started a conversation about what I did and how I liked London, doing a great job of seeming interested. I did get to change the subject long enough to say I'd enjoyed the Mescaleros concert I'd seen a few months earlier and to put in a request for more tours of the US. We soon arrived in front of some club where a large group awaited Strummer, so I said goodbye and continued on my way. In front of the others, he made a point of pretending we were old friends: "Great to see you again, Chris. Cheers, mate." Strummer was unfailing in his kindness to society's nobodies, and it's easy to see how that fed his seething anger toward the status quo.

Joe Strummer's life always invited speculation about how he came to his political and musical ideas. From the time he joined Mick Jones and Paul Simonon to form The Clash until his death on December 22, he was the most complicated and unlikely punk. For starters, he wasn't born into the class he championed. A diplomat's son who attended a posh boarding school, he could have traveled the well-worn path through Oxbridge to a lucrative civil service or financial district career. Instead, he repeatedly ran away from school and squatted in abandoned houses in West London. Neither that decision nor his tireless political activism prevented remarks about his social origins by backers of lesser punk outfits like Sham 69, whose service to the proletarian cause consisted of playing sped-up soccer songs with lyrics about nothing in particular. The Clash's myriad musical experiments led to further accusations that they weren't real punks and, as if in agreement, many of Strummer's obituary writers have found the band's legacy to be in its ventures outside punk forms. Both characterizations are too narrow. The Clash's roadmap-jettisoning ventures into reggae, dub, funk and rap were remarkable, but it's equally true that the group's ultra-high speed live performances (as opposed to their more measured studio tracks) helped influence the development of hardcore, particularly in Britain. 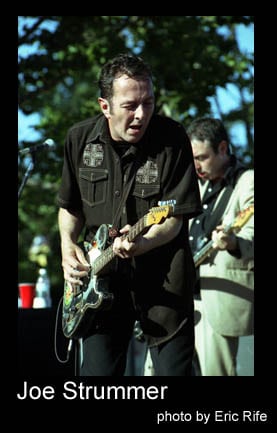 The obit writers' other favorite standby - the formulaic comparison between the idealistic Clash and the nihilistic Pistols - is simplistic and unfair to both. But it is true that Strummer's performances had a wider range than those of other punk frontmen. Though he lacked the ideal punk voice (my vote goes to the booming yet raspy growls of Stiff Little Fingers' Jake Burns), Strummer could personify rage. But he was also able to invoke your pain and then suffer through it, and even apparent idiosyncrasies contributed to the effect. During sequences in which he was just singing, Strummer had a habit of pressing his fingertips hard against his right temple. It may have been simply the result of time spent holding the headphones on in the recording studio, but combined with his anguished contortions, it gave the impression of a man desperately trying to keep his head from exploding.

The band's continued importance derives from the quality of the songwriting, particularly in terms of the lyrics, and Strummer was the group's leading force in that department. The Clash were born in earnest when he modified Mick Jones's song about an ex-girlfriend. Strummer changed it from "I'm so bored with you" to "I'm so bored with the U.S.A," a trenchant critique of the CIA, the IMF and bad American detective shows. Another high point of the band's first album was the thunderous "White Riot," which pointed out the common problems of poor whites and poor blacks more effectively than any of the scores of peace-and-love "Can't we all get along?" songs produced over the years. "All the power's in the hands / Of people rich enough to buy it / While we walk the streets / Too chicken to even try it." The strength of the group's early albums was the combination of searing descriptions of personal experience, like the great unemployment song "Career Opportunities," with witty satires of the greed and corruption of money culture. The lyrics to "Lost in the Supermarket" exposed the emptiness of consumerism over the music's easy-going, almost shopper-friendly, sound: "I came in here for the special offer / a guaranteed personality." "Koka Kola" was The Clash's funniest song, a rearrangement of the bottling giant's signature ditty aimed at cocaine chic in the fashionable Manhattan party set: "I get my advice from the advertising world / Treat me nice, party girl / Coke adds life where there isn't any."

Not long after releasing "Koka Kola" on their London Calling album, the group set up shop in New York City, and it was a good move. The Clash were needed more in America, where class is the real c-word. The band's residency on this side of the Atlantic yielded memorable attacks on repression like "The Call Up" and "Know Your Rights," along with frank looks at the struggles of the inner city. It's easy to forget how uncommon songs like "Police on My Back" were in the years before NWA and Public Enemy hit the scene. "Straight to Hell" is still the best song about Vietnam, chronicling the war from the viewpoint of the blue-collar men who fought it while the economies of their home towns were collapsing and the George W. Bushes of the world were Stateside trying to impress women with their National Guard uniforms. "As railhead towns feel the steel mills rust / Water froze in the generation / Clear as winter ice / This is your paradise."

"Straight to Hell" turned out to be the last great Clash song, as anyone who's heard the B-side of Combat Rock can attest. Strummer's feud with Jones, whom he once compared to "Elizabeth Taylor in a filthy mood," triggered the meltdown, and legal problems with The Clash's record company kept Strummer off stage for a long time thereafter. He finally came back in the late '90s with the Mescaleros, who turned out to be good partners in his last musical experiments - chiefly rockabilly and folk rock. In live performances, the group offered its own songs and old Clash favorites in roughly equal portions. Judging by his obvious delight at being on stage again, that was a compromise that worked well for the old frontman, who repeatedly dismissed talk of any new Clash tours, calling the idea "artistic death." In any case, Mick Jones did join the Mescaleros for their encore songs at a West London benefit for striking firemen last November. At first I wasn't so sure about the reunion, since I thought Strummer's opposition to re-forming The Clash was correct. But from the perspective of the last two weeks, it seems a perfect ending, right down to the venue (in Acton, near the band's old neighborhood) and the choice of first song (the sadly reminiscing "Bankrobber").

Unfortunately, Clash fans will also remember 2002 as the year of the "London Calling" Jaguar ad, which was even worse than the appearance of the Ramones' "Blitzkrieg Bop" and the Buzzcocks' "What Do I Get?" in SUV commercials. Embarrassing as it is to have punk associated with wasteful yuppies, those latter two songs were hardly political. But as with the use of Creedence Clearwater Revival's anti-Vietnam War anthem "Fortunate Son" in a jingoistic Wrangler commercial, the Jaguar ad pirated and gutted a song utterly antithetical to its message and target audience. Christ, Mrs. Thatcher had a Jag. Jaguar execs may well have achieved the apex of cynicism, conjuring up visions of health club commercials with the Pistols' "Bodies" playing in the background, or Harvard informational videos with samples of the Dead Kennedys' "Terminal Preppie." But ugly as the Jaguar spot was, memory of it fades about halfway through a listen of The Clash's first album. And the reason we cared at all is because The Clash insistently hammered out a radical vision that is even more vital after twenty years of pseudo-radical postmodernist gimmickry. Social distinctions are real and palpable, and the motives of the ruling few aren't complicated, even if our reasons for accepting their predominance are.

I wasn't thinking in such abstract terms this past November when I saw a performance by the New York hardcore band the Casualties. Jorge, the lead singer who declares his Mexican heritage with red, white and green hair, announced that "one of our favorite songs" was up next. The group then tore into an energetic, extended rendition of "White Riot." The cover got the best response of any song in the band's set, even from those wearing Casualties shirts and jackets. If punk didn't cross all racial, national and urban-rural divides and become a universal music of working-class protest, that wasn't Joe Strummer's fault.

Originally from Orange County, Pepus now lives in the midwest, where he is a freelance writer.