Eighteen years after the band’s break-up, Reagan Youth resurfaced on the shore of the polluted ocean of dust known as the Inland Empire. Reagan Youth released only one album during its time, way back in 1984—Youth Anthems for the New Order—but the band’s impact is still incredibly strong. The Showcase Theatre was packed with kids, many of whom knew every lyric to all the politically charged songs. There was also a considerable number of older fans, people in their late 30s and early 40s, but the overwhelming majority of screaming, chanting spectators was the righteously indignant youth of today.

There was a fifth band on this bill, the band that opened the show, but I did not get there in time. I asked somebody about it and was told, “It was a bunch of kids making a buncha noise.” Okay, it was the buncha kids making a buncha noise band. There are a lot of those. Doomsday Hour was up next, and this five-piece sounded pretty good. It was high-speed, heavy, and ominous-sounding anarcho-thrash, with decent, intermittent metal solos. I give it a C+ only because the most of the songs tended to sound the same. Am I right or wrong? Judge for yourself at: www.myspace.com/doomsdayhour.

“Mouth Sewn Shut? What kind of stupid name is that?” I thought to myself. Well, it turned out to be a hard-hitting, pleasant surprise! I usually avoid bands with a sentence clause for a name, but what’s in a name anyway? This Boston-based foursome puts out intense hardcore punk with a distinct reggae flavor. What’s that like? It’s like eating fried tofu laced with ganja as fast as you can. It’s like getting repeatedly kicked in the face with the non-threatening boot of unity. There were a lot of good tempo changes and head-nodding breakdowns mixed with the gravelly, but palatable vocals. Very impressive, and you too can feel like Bob Marley on steroids as a roadie for Crass at: www.myspace.com/mouthsewnshut.

I had never seen Christ On Parade before, but I was familiar with its music because some of my skater buddies used to play their tapes while we skated my two half-pipes back in the mid ‘80s. As I remembered, the five guys from the San Francisco Bay area played super-fast, super-tight hardcore with the occasional tempo switch before going right back to light-speed thrash. Think of extreme anarcho bands like Conflict, Flux Of Pink Indians, and you have the right idea. I was surprised to see how many youngsters were familiar with the band’s music and message. The venue was really starting to fill up, and the immediate stage area was packed with dozens and dozens of kids singing in unison about the evils of “the system.” Trip out. What’s old is new again… and it’s been that way for awhile. Drop into this supersonic blast from the past at: www.myspace.com/christonparadeofficialbandpage. 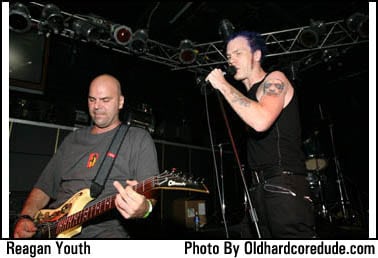 Just before Reagan Youth took the stage, bassist Al Pike came over and talked a bit with me and my good friend Scott Brown. Mr. Pike was stoked that Scott was at the show…perhaps a bit too much. You see, Scott has a form of Muscular Dystrophy that renders him almost paralyzed and confined to a wheelchair. Al’s young son was just diagnosed with Autism, so he has that newly found solidarity with the Special Needs set. “Oh, wow!” He exclaimed. “Thank you so much for coming!” It was sincere and very nice, but Scott was a bit amused at Al’s extreme exuberance… but not too amused to work the situation to finagle himself a free Reagan Youth T-shirt.

Reagan Youth is a New York foursome originally formed in 1980. It is one of the first American “Peace Punk” bands, and gained a large following with its socially critical brand of American crust mixed with wah-infused metal. The promotional art was always eye-catching and controversial with its deliberate use of Nazi, Klan, and extreme right wing Republican iconography. The point was to show the similarities between these groups… oh, and don’t forget the Catholic Church. Reagan Youth has a flier or two from back in the day with real photos of Catholic Bishops happily giving the seig heil to the Third Reich. The Hitler Youth of WWII-era Germany had a lot in common with the rabid supporters of our own actor-turned-president, Ronald Reagan, thus the name. Reagan Youth is also a band that has seen its share of painful reality. Founding member and vocalist Dave Insurgent took his own life after a series of personal calamities, and the band has remained silent…until now.

Co-founding member and guitarist Paul Cripple has ordained Pat of the NY band Distraction to carry on the vocal torch. Pat did a damn fine job, but he clearly knew his place. Whenever Paul began to speak, Pat silenced himself out of respect. On drums was Johnny Aztec—not the original drummer, but one of the earliest. Bassist Al Pike is also one of the early members, but not a founding member… old enough to be authentic though!

I am not very familiar with the band’s catalogue of songs, but I do know that “Jesus Was a Communist” and “Reagan Youth” were played. It might be a safe bet to assume most or all of the Youth Anthems…was on the set list. A steady stream of crusty punk kids was constantly flying off the stage over the mass of upraised fists and uplifted voices. “This band hasn’t played in eighteen years?” I thought to myself. It sounded just like yesterday; it sounds like now. Look at the fascist bullies in the White House and you can see that the social pendulum keeps swinging back and forth. Who said kids don’t care about current events? The punk rock time machine had once again come to life and took us all back to the infinite now where the music and message resonate forever. http://www.reaganyouth.net/ and www.myspace.com/reaganyouth